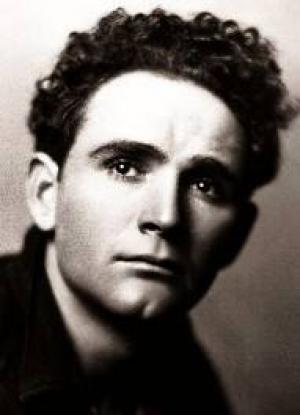 Like his contemporary John Ford, Frank Borzage started making two-reel Westerns in the mid-teens, but he found his directorial voice earlier than Ford did. He grew as an artist and craftsman throughout the twenties, and closed the decade and the Silent Era with four masterpieces in a row, Seventh Heaven, Street Angel, The River, and Lucky Star. He continued making films through the fifties, frequently hitting the top of his form, as with A Farewell to Arms (1932), Man's Castle (1933), Little Man, What Now? (1934), Three Comrades (1938), The Mortal Storm (1940), and Moonrise (1948).

He was a rarity in a business that has always made much of (some might say exploited) the human concern for love and sex. A true Romantic, never saccharine and never mistaking sentimentality for sentiment. Although he had reasons in his private life to be cynical about the relations of men and women, he was always totally sincere in his depictions of the carnal and spiritual connections between people. There is no sarcasm, no tongue-in-cheek in Borzage, no Brechtian distanciation; he is always close to his characters, to his actors, and to us.

Before the advent of Sound, Borzage had developed an absolute mastery of mise-en-scène: each shot, each camera movement, each cut, fade, or dissolve is the perfect choice; his decisions as a director all seem inevitable. And there is his incomparable ability with actors: almost all of them did their very best work with him, even Marlene Dietrich in his Desire (1936) possessed a richer humanity than she had working with the equally masterful Josef Von Sternberg.

In his most fully realized films, the private world that Borzage's lovers inhabit is invaded, and the lovers tested, by War, Depression, Naziism, and even Death. Their greatness comes from their transcendence. Frank Borzage's work is succinctly characterized by a title in Street Angel, "Souls made great through love and adversity".