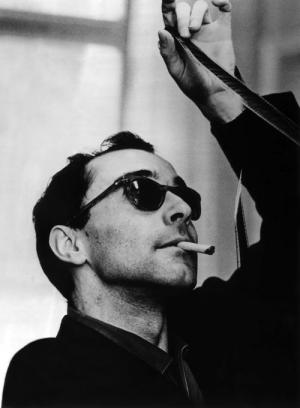 "Cinema is the most beautiful fraud in the world."
~ Jean-Luc Godard

Iconoclast, contrarian, egomaniac, polemicist... the list goes on but barely scratches the surface with this genius of world cinema. One of a gaggle of critics from the magazine Cahier Du Cinema who were fed up with the 'tradition of quality' so prevalent in the French cinema of the mid-50's, and who decided to make their own films to remedy the status quo. Godard started feature films with a bang, Breathless burst onto the scene with energy and verve in 1960 and Godard hardly drew breath himself in the next dozen years. Progressing quickly from a singular and personal vision to a political and collectivist ethic Godard variously essayed France's turmoil over Algeria and the riots of 1968 and their aftermath, sometimes directly as in Le Petit Soldat or Tout Va Bien, and sometimes obliquely as with Pierrot le Fou.  Godard moved from a narrative style, that is narrative as it applies to him, to a documentary approach after his political radicalisation in the late '60's, but early on he noted 'you can either start with fiction or with documentary, but whichever you start with you will inevitably find the other'. In later years he again made some narrative based films, but his remarkable 266 minute documentary series Histoire(s) Du Cinema from 1988 to 1998, where he edited a personal and idiosyncratic take on what cinema meant to him, revealed where his true sympathies lay.

Godard polarises like few other filmmakers, alternately maddening and engaging, sometimes within the same frame, he is not to all tastes. Personally I looked at Breathless early in my viewing life (mid-20's) and found it tedious, couldn't understand the fuss. I re-visited after I'd discovered Truffaut and Malle, and thought, "what was I thinking" - I was hooked on Godard's skewered take on the world.

Godard's golden period from '60 to '68 continues to amaze and entertain.

Made in the USA

Two or Three Things I Know About Her