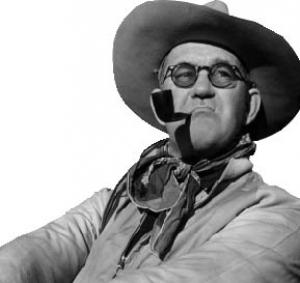 An American giant? print the legend

"I like, as a director and a spectator, simple, direct, frank films. Nothing disgusts me more than snobbism, mannerism, technical gratuity… and most of all, intellectualism".

John Ford strides the American cinematic landscape as a colossus, starting as a sidekick to his brother Francis Ford in the silent era, even taking his brother's stage surname of Ford in preference to his own of John Martin Feeny and worked continually until 1969. Ford had the eye of a poet, and mostly a one-eyed poet at that, and the constitution of a bully, preferring to push his single-minded visions through to fruition no matter the personal cost. The results were there for all to see and 4 Academy Awards for Best Director attest to his standing in the industry. Ford was a sprawling mass of contradictions, but almost no other director has left such a deep and lasting impression on the art of filmmaking.

Ford learned his trade in the rough and tumble of the churn ‘em out silent days, making his first film for Universal in 1917 after spending several years as a ‘jack of all trades’ with his more famous actor/producer brother Francis. Ford became adept at turning out efficient and cheap westerns and his first productive partnership was with cowboy actor Harry Carey Snr, a 4-year collaboration that spawned 25 films! Ford survived the leap to sound, and was fascinated by what the great German director F. W. Murnau was doing in Hollywood with his masterpiece Sunrise. Ford was American born but had an Irish heart, and a great love for the literature and history of that much put upon Island, his Irish cousin Sean O’Casey was a renowned playwright for Dublin’s famous Abbey Theatre. The visual poetry that a genius like Murnau could evince obviously gave Ford a yardstick by which he could measure and extend himself and in a pair of Victor McLaglen vehicles, The Lost Patrol and The Informer, he produced striking results, the latter winning him his first Best Director Oscar.

The Informer was an IRA story, a rebel Irish organization that Ford supported with money for many years, in one of the few overtly political acts he surreptitiously engaged in. Ford became infatuated with Katherine Hepburn, and carried on a 4-year affair with her, during which they made the excellent Mary of Scotland. Ford’s Catholic faith probably accounted for the great guilt he felt in this adultery, and between films Ford would typically isolate himself from everyone and drink excessively. Ford was attracted to literary properties, even if he didn’t produce his own projects consistently until after WWII, and like his friend and contemporary Howard Hawks he valued writers highly. After working often for RKO during the mid to late 30’s, Ford formed a valuable working relationship with Daryl F. Zanuck at Fox making fine visual poems like The Prisoner Of Shark Island and produced much of the iconic output that ensured his legacy, including Young Mr Lincoln, How Green Was My Valley and The Grapes of Wrath.

Two of Ford’s finest efforts during this period were productions of his own company, formed with Walter Wanger, one a labour of love based on Eugene O’Neill short stories called The Long Voyage Home, but before that his first western in over a decade, Stagecoach. John Ford had been trying to get the piece made for years, but westerns were decidedly out of favour in Hollywood, and he was turned down until United Artists agreed to distribute it. Wanger wanted Gary Cooper and Marlene Dietrich as the stars in the unwanted property, but Ford held out for Claire Trevor and a little known ‘B’ actor called John Wayne. Ford had built up a stock company over the years, both actors and technicians, and employed many of them repeatedly, so inexperienced leads like Wayne had brilliant support in the hardened talents of Thomas Mitchell and John Carradine.

John Ford’s old-world machismo, and his idea of masculinity and ‘traditional values’, led him to volunteering for military service when America belatedly entered WWII. He made a name for himself as leader of a Naval Field Photographic Unit, filming across the Pacific and Europe, being wounded and decorated and promoted to Rear Admiral. Towards the end of the war he made the remarkable They Were Expendable, an un-sentimental and bruising look at the Pacific conflict, a film he had little time for in later years. Perhaps he had conflicted memories due to incidents during the filming involving his shameful bullying of Wayne for his lack of military service, and the reprimand he got from star and military veteran Robert Montgomery, but the film remains one of his stellar achievements.

After the war and after providing Fox with another masterpiece, My Darling Clementine, starring one of his favourite actors, Henry Fonda, Ford teamed up with his old friend Merian C. Cooper to form Argosy Productions. In the political climate in post WWII Ford’s formerly liberal politics hardened to the right, just prior to the HUAC witch-hunt intent on rooting out so-called Communist influence in the film industry. During the war Ford joined the Motion Picture Alliance for the Preservation of American Ideals (MPA), an organization whose main members and anti-communist cheerleaders were none other than John Wayne and stock company stalwart Ward Bond. This may help to explain why Ford was not a high-profile target of HUAC, given his previously admitted left wing views and his history in helping organize guild unions in Hollywood in the 1930’s, not to mention he was the director of The Grapes of Wrath, a film despised by the right wing.

Ford had supported the Spanish Civil War struggle against the fascists and wrote to a young relative who was fighting there - "I am glad you have the good part of the O'Feeney blood. Some of it is very God-damned awful, we are liars, weaklings & selfish drunkards, but there has always been a stout rebel quality in the family and a peculiar passion for justice. I am glad you inherited the good strain. Politically, I am a definite socialistic democrat--always left." Perhaps it was the Irish rebel in Ford that made him a (mostly private) opponent of the notorious Blacklist, the end result of HUAC’s dog and pony show, where thousands of film industry workers were denied employment on the basis of alleged political beliefs. Either way his statement that he’d employ communists and his efforts to get friends who were on the Blacklist work drew no heavy investigative ire from the right.

In a famous Screen Directors Guild meeting in late 1950, when a bitter divide had grown between the Cecil B. DeMille faction on the right and the Joseph Mankiewicz faction on the left Ford made a principled stand to tip the vote against DeMille. He made the tongue in cheek declaration, “I’m John Ford, and I make westerns”, which drew laughs in its self-deprecation. He went on in a rambling speech to both publicly belittle DeMille and to praise him, “I admire you Cecil, but I don’t like you and I don’t like what you’re doing here”. In typical contrarian Ford style, he wrote a toadying and apologetic note to DeMille the next day and despite a brief alignment with the Irish-American John F. Kennedy his politics remained conservative.

The war service and older age seemed to harden his pro-military tendencies, and after WWII almost his entire output consisted of mostly dewy-eyed observations of military service, like The Long Gray Line or The Wings Of Eagles or examinations of men in conflict via his favourite genre, the western. Ford’s westerns in his latter period included many sympathetic portrayals of the Native American experience, and Ford is quoted as saying “Who better than an Irishman to understand the plight of the American Indian”? although this was not the case in possibly his greatest western, The Searchers from 1956 where the Indians are more akin to marauding Nazi’s. Ford settled into a twilight working phase of producing mostly westerns, and with all of his artistry still intact he managed to make outstanding examples, none better than his moody and bittersweet examination of western mythology in The Man Who Shot Liberty Valance, a masterpiece in any era.

John Ford avoided any deep analysis of his life and art, begrudgingly doing occasional interviews, but for a man who had made 80 feature films before the advent of sound the idea that filmmaking was ‘art’ was one that ran counterpoint to the work ethic and hard graft he employed to stay directing for over 50 years. "I love making pictures but I don't like talking about them" Ford said, dodging any accusations of artistry from his many admirers, including directors Lindsay Anderson and Peter Bogdanovich.

For all his meanness, pig-headedness and self-loathing John Ford was a storyteller and visual poet of the first rank. Like Hitchcock he didn’t waste film, cutting in the camera so no-one else could edit his films in a way he did not want. Unlike Hitchcock he did not have a meticulous storyboard before he started shooting, preferring to trust his own instincts about what shot he needed. He bullied, cajoled and stroked his actors and got incredibly consistent performances from them, finding depths in many that others could not.

John Ford was a mass of contradictions, a failed family man who idealized that institution in his films, a binge drinker who would go to Mexican whorehouses with his male friends after sailing on his beloved boat on drunken getaways. Ford managed to be a liberal when the times called for it, or a reactionary conservative as he aged, and many contradictory themes flowed through both his life and films. He thought nothing of demeaning and belittling his cast in front of the entire company, but could put very sentimental and softly expressed ideas on screen that reflected an underlying, and oft-denied sensitivity. "He was the nastiest person I ever met" said James Cagney, whereas How Green Was My Valley writer Philip Dunne said, "I knew Pappy liked me because he never said a civil word to me in all the years I knew him". His influence and legacy is undeniable, admired by film lovers on every continent and in every era, just don’t call it art!