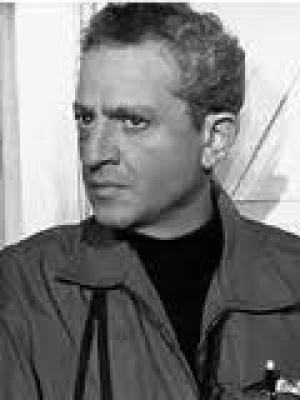 "Louis B. Mayer's arm around your shoulder meant his hand was closer to your throat." ~ Jules Dassin

Is not a French film director, as he says himself he's Julie Dassin from Connecticut, who cut his teeth on the New York theatre scene. The reason for the confusion is his relocation to Europe to escape the 1950's blacklist, and his direction in France a couple of years later of one of the iconic French films of the era, Rififi. Dassin got his start in Hollywood via RKO, where he observed and reported on Hitchcock making Mr and Mrs Smith. MGM employed him soon afterwards and he graduated to mild, lightweight projects, but he rebelled against Louis B Mayer's dictatorial style and was sidelined while his contract ran out. Universal gave him a start next via an association with producer Mark Hellinger, an ex Broadway columnist and together they made a couple of dynamic Film Noir's, the prison drama Brute Force with Burt Lancaster, and Hellinger's love letter to New York, The Naked City. Daryl F. Zanuck at Fox gave Dassin work with another pair os significant Noir's Thieves' Highway, and the London located Night and the City. Prior to the latter film being started Zanuck personally warned Dassin he was to be blacklisted and to get out of town. Dassin was named as a communist by fellow director Edward Dmytryk, having been a member of the party during the 1930's.

After the London film was complete Dassin couldn't get work in Hollywood and went back to Broadway to direct Bette Davis on stage, but relocated to Europe after it was apparent the blacklist wasn't going away anytime soon. Dassin had a huge ht with the heist drama Rififi and went on to international success with the light but fun Topkapi and Never on Sunday in which he starred with his then wife Melina Mercouri. Dassin was very adept at handling actor's and his stage background ensured he got great performances out of his casts. Technically unfussy, he was a master at creating atmosphere and tension when needed, the heist sequence in Rififi plays out as a silent section of almost 30 minutes, and remains a bravura, signature piece of filmmaking. Dassin remained active in Greek politics in later life with his wife, and spoke scathingly of the men like Dmytryk and Kazan who gave 'friendly' testimony to HUAC.

Topkapi
The Law
Never on Sunday

A Letter for Evie