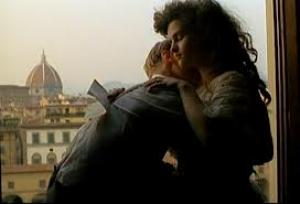 A Room with a View

James Ivory and Ismail Merchant formed their eponymous production company in 1961 with writer Ruth Prawer Jhabvala and made a series of interesting, low key, Indian centric films that found a limited audience. Starting with Jhabvala’s ‘The Householder’ in 1963 they continued to have critical acclaim but limited commercial success. In the late ‘70’s they broadened their appeal to include adaptations of Henry James and found a wider audience with his ‘The Europeans’, before capitalising on their success by adapting Jhabvala’s own novel, ‘Heat and Dust’ in 1983. They suddenly found themselves the darlings or period melodrama and proceeded to produce one of the finest of all in their exquisite adaptation of E.M Forster’s ‘A Room With a View’ in 1985.

Lucy Honeychurch (Helena Bonham-Carter) and her repressive chaperone, Aunt Charlotte (Maggie Smith) are holidaying in a pensione in Florence. They meet several other Englishmen, including the Emersons, free-thinking liberals from the lower classes. Lucy is attracted to the moody and philosophical George (Julian Sands) but a relationship is impossible under the prudish Victorian eye of her Aunt. George manages to steal a passionate kiss, igniting something in Lucy she struggles to deal with in her subsequent life in England. Lucy agrees to marry the wealthy but straight-laced Cecil (Daniel Day-Lewis) but George complicates the engagement by moving into the district and befriending Lucy’s younger brother.

Ivory manages to make the quintessential British period drama, made more surprising by the fact he’s an American, and his producer partner an Indian. Merchant said of their unlikely success in essaying period mores, "It is a strange marriage we have at Merchant Ivory...I am an Indian Muslim, Ruth is a German Jew, and Jim is a Protestant American. Someone once described us as a three-headed god. Maybe they should have called us a three-headed monster!" The clear and independent eye of the outsider allowed the trio to cut to the heart of the matter in many ways as they pointed up the strictures of class and convention.

The story neatly encapsulates the limits put on women by an Edwardian patriarchal society and by hundreds of years of prudery and repression at every level. The metaphor for Lucy’s dilemma is her pianistic ability, as overheard by the earthy vicar (Simon Callow) who absorbs her rendition of a Beethoven composition, “If Miss Honeychurch ever takes to live as she plays, it will be very exciting”. The Florentine sojourn also emphasised to Lucy the gap between the legacy of Victorian reticence in women like Charlotte, and the freedom the Italians seemingly have to live lives with passion and overt expression of feeling. Lucy retreats to the values of the time, obediently getting engaged to a ‘solid’ man, but sensing something in her has changed. Lucy lies to everyone about her true thoughts, but mostly to herself as the inexorable build up of emotion consumes her.

The class aspect is nicely alluded to in the characters of the Emersons, the Elder (Denholm Elliot) and his son George. Mr Emerson is socially inept, but his heart is in the right place, a fact Lucy responds to. Charlotte can’t look past the lower class origins of Emerson and his son, and judges their behaviour accordingly in a narrow minded way. Emerson is open minded and an atheist, and brings his son George up to think and read broadly, and to question convention. The era represented was the last gasp for the unquestioning patriarchal and monarchical tradition of Lucy’s world. It would take Women’s Suffrage and a World War to point the way to a different methodology in doing things, as the Empire mentality finally started to unravel. Emerson generously offers Lucy and Charlotte a room with a view, and this also is a metaphor pointing to the limited world view of people of Lucy’s class, in that Emerson doesn’t need the room with a view, his eyes are open where it matters. The neat and beautiful visual coda brings the idea to a satisfying consummation, as the couple share the view, but more importantly with passion, as Lucy views a potential new world to suit her growing ideas.

Ivory taps into the depths of seemingly endless acting talent in the British Isles. Bonham-Carter put a lock on period ingénue roles for some time with a superb characterisation of Lucy, and would step up to the benchmark she created a few years later in the superb Merchant Ivory film, ‘Howard’s End’. She proved herself a capable and excellent actress and boldly broke the, costume drama ingénue stereotype her success in those roles created. Daniel Day-Lewis is pitch perfect in the role of the snobbish Cecil, and embarked on a screen acting career the equal of any in the history of cinema, rising to the very top of his profession. Every support role is wonderfully delivered by a superb ensemble, from Maggie Smith’s idiosyncratic Aunt to Simon Callow’s knowing Vicar. Denholm Elliot provides another beautifully realised character to add to his retinue of understated masterpieces, and Judi Dench matches him with her nuance and tasteful choices.

The Brits are past masters of period and costume dramas, and for a Yank to not only match the very best of the genre, but to also raise the bar, speaks volume for the taste and acumen of James Ivory. This literate and educated man invests all his fierce intellect in realising a coherent and beguiling vision, in coalescing all the quicksilver elements that go into making a film, and keeping them in perfect balance. Ivory would go on to even greater glories in partnership with Merchant, the complex political intrigue of ‘Remains of the Day’ and the epic emotionalism of ‘Howard’s End’ crowning a brilliant career. ‘A Room With a View’ is a beautifully crafted microcosm of a by-gone era, and a window into a time and an attitude that can still move and delight any modern heart. 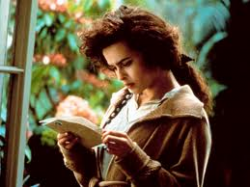 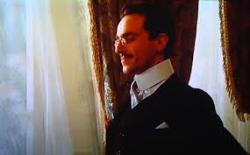 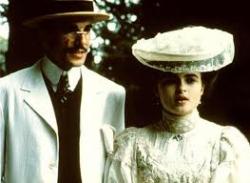 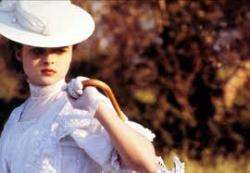