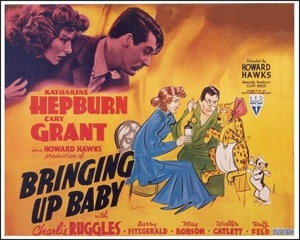 "Cary Grant was so far the best that there isn't anybody to be compared to him."
~ Howard Hawks

Howard Hawks made Bringing Up Baby as the first of a six-picture contract with RKO, an atypical commitment for the independently minded lone-wolf director. Reuniting Cary Grant and Katharine Hepburn as the leads, who made Sylvia Scarlett  together two years prior for RKO, and working from a Dudley Nichols script, Hawks fashions one of the era’s sublime comedy confections and set one of the high water marks for the screwball genre. The film effortlessly deconstructs gender role expectations and challenges convention with anarchic, quick-fire dialogue and incongruous situational set-up’s. The sexual innuendo of the premise, a man looking for his ‘bone’ led to problems with the censors, but the sly and sophisticated script never makes the topic overt, the allusions are subtle and layered. Hepburn was fantastic as the ditzy rich girl, but audiences were unsure of her appeal and after this film she was labelled ‘box-office poison’ by exhibitors and she returned to the New York stage from which she’d come.

Providing a model of the absent-minded professor is David Huxley (Grant), a scientist devoted to completing the four year reconstruction of a Brontosaurus skeleton, requiring only one more bone to do the job. His fiancée is Alice, a glacier cool administrator, who despite the fact that they are to be married the next day requires David to not take time off for a honeymoon, a point that leads him to express in the mildest possible way his disappointment and obvious sexual frustration. Alice also needs David to play a round of golf with a museum benefactor who will help obtain a million dollar donation to the museum so that they can continue their work. On the golf course David proves singularly inept at smooth talk and gets caught up with rich girl Susan Vance (Hepburn), more than a match for David’s scatter brained antics. The two are henceforth joined at the hip, as she is struck by his innocent sweetness, and he’s slowly bought back to life by her impish free spirit.

After a disastrous further meeting at a restaurant, where Grant suggested using an old vaudeville routine he knew involving a torn dress, the couples joint destiny is further entwined by the fact Susan is the niece of the million dollar benefactor and that she has resolved to prevent David from marrying Alice and have him hopefully fall in love with her in the process. David’s precious bone goes missing courtesy of George (Skippy), the famous movie dog who played Asta in The Thin Man, and Susan and David make comical attempts to find it. Susan’s brother has sent her a tame leopard (as you do) to be forwarded to her eccentric aunt, and Susan convinces David to help her look after it in the interim, only to have it escape. A circus troupe loses its wild leopard in the same area, and all of a sudden the chase takes on new dimensions. The couple are eventually put behind bars by the befuddled local Sheriff, and Susan loses David back to his stuffy museum, where Alice rejects him because of his undisciplined behaviour around Susan. Susan finds his bone, returns it to him, only to generate a complete collapse of David’s life’s work.

The bare bones of the scenario doesn’t communicate the sheer joy of the piece, the verve with which Hawks directs nor the sheer abandon of two stars, who have great chemistry and also place huge trust in their director. Hawks’ pace never lets up, and Hepburn is radiant as the haughty-but-sincere Susan, who breathes the staid ‘statue’ of David to life. She rivals Carole Lombard as a top notch comedienne, and even though critics were generally favourable audiences were still not convinced. Grant is wonderful as the meek paleontologist, caught like a deer in the headlights, and struggling to come to terms with the latent emotions Susan has unlocked. "The love impulse in the male often reveals itself in terms of conflict"  she says at one point. Alice had emasculated David, and Susan restores his virility and gives him a life outside the empty academic halls of the museum, showing him that life is for the living, not for the dead and skeletal. David says to Susan, "In moments of quiet I’m strangely drawn to you, it’s just that there hasn’t been any moments of quiet!"

Hawks ran way over budget with Bringing Up Baby, not endearing himself to his new bosses, and after his next film Gunga Din, (which he’d begun preparing earlier) and also with Grant as star, began to run over budget as well he was fired and replaced by George Stevens and his contract was torn up. Hepburn didn’t get any more bankable with the films uneven box office results and objected to the B picture property she was ordered into next, she bought out the remaining part of her contract and went back to Broadway for over two years, finding the role of a lifetime in Tracy Lord and The Philadelphia Story. Grant was about the sixth choice for Bringing Up Baby  after many actors had turned the part down, and he was unsure how to play it, Hawks giving him the key with the glasses, "you’ve seen Harold Lloyd haven’t you?"  and with that Grant effortlessly slipped into Lloyd’s innocent charmer persona, blissfully creating havoc around him and not quite fully aware that he’s the central catalyst.

Hawks and Grant would more than match the wit and verve of Bringing Up Baby  when they re-teamed for the brilliant screwball comedy His Girl Friday a couple of years later and Grant remained a favourite of Hawks for the rest of his career, even if eventually turning down Man’s Favourite Sport  in 1962, poignant acknowledgement that , incredibly, not even Cary Grant could resist the ravages of age. Thankfully he stays forever young, on a silver screen somewhere, in classics such as this. 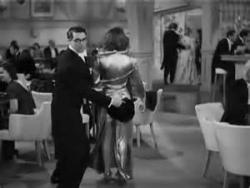 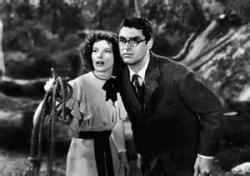 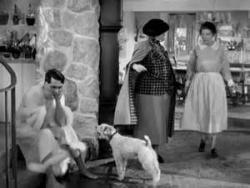 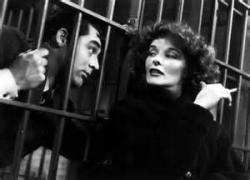 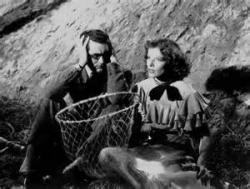 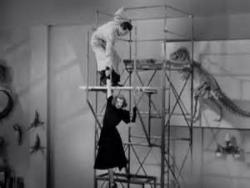