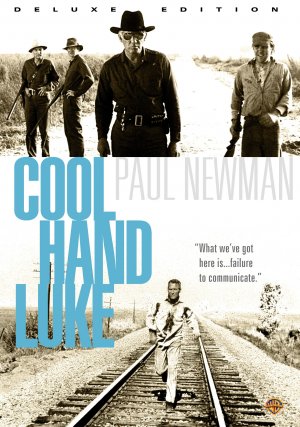 Cool Hand Jesus? or, Old 'No Eyes' is back

Experienced TV director Stuart Rosenberg made his feature film debut with this update of the '30's Warner Bros gangster era yarns, albeit given a '60's counter culture perspective and a Christ allegory to boot. The picture was produced by Jack Lemmon's company and intelligently scripted by Donn Pearce and Frank Pierson from the novel by Donn Pearce, and gloriously shot by ace cinematographer Conrad Hall who captures several shades of hot and sweaty and dusty with his beautiful compositions out on the roads and fields with the chain gangs, and the claustrophobia of the prison compound. The success of the enterprise however would always turn on the casting of the central character, and with Paul Newman as Lucas Jackson, Rosenberg couldn't miss. Newman dominates the screen in one of his finest efforts, his charismatic Luke was to be one of his iconic roles, in an era when he was on something of a streak, 'Fast' Eddie Felson in The Hustler having come before and Butch Cassidy just ahead.

Rosenberg opens with close up's of parking meters, the word 'violation' in red filling the screen. Luke Jackson is calmly, if drunkenly, cutting the heads off municipal parking meters one by one, the police arrive after a couple of dozen beheadings and before long Luke is dumped at a State Correctional Facility. The Captain (Strother Martin) gives his welcoming address, mentioning that Luke was a 'war hero' who despite earning many decorations left the army at the same rank he joined, presaging Luke's difficulty to accept authority. The mirrored aviator glasses of the head guard 'No Eyes' reflect the chain gang and become a metaphor as they fill the screen, the cold, god-like gaze of 'No Eyes' will haunt Luke the remainder of his stay. Luke soon finds that for all the rules the guards have outlined, the inmates have just as many, as Dragline (George Kennedy) a huge bear of a man, controls what goes on inside of the yard. The morning work detail sets out like a military operation and it's clear Luke is back in the control of an instrument of state. Luke learns the routine and rules, as well as the frustrations and petty injustices that are daily fodder for the inmates. Rosenberg heightens the sexual tension by having a girl suggestively wash her car in full view of the chain gang, the hose an obvious phallic substitute as the men are driven mad, 'She don't know what she's doing', one helplessly says, 'she knows exactly what she's doing' replies the canny Luke. Luke's free spirited attitude finally boils over with Dragnet, who challenges him to a boxing match to air their differences. The bull-like Dragline easily accounts for Luke, but Luke keeps getting up despite advice by other in-mates to 'stay down', finally Dragline accepts his stubborn stand and carries the beaten Luke off becoming his friend in the process. Luke further endears himself to the boys by winning a massive pot in a game of cards by bluffing the opposition. 'You had nothing', says Dragline, 'sometimes nothing can be a real cool hand', replies Luke.

Arletta (Jo Van Fleet), Luke's mother, visits him in prison, she's incapacitated and in the back of a truck, smoking and near death it seems. She regrets the turns that have led Luke to this, recalling a failed marriage, where his attempt at 'respectability' robbed him of all his life 'you was borin' the hell out of all of us' she says. Arletta tells him she's leaving everything to his dull brother, making it clear that her special affection for Luke was because of his free spirit, maybe something he got from the father he never knew. She leaves him a banjo and upon news of her death Luke picks it up and quietly plays the subtly irreverent 'Plastic Jesus'. Luke leads the men in a win against the 'man', having them complete a strip of road in record time and leaving the men with nothing to do for the rest of the day. Luke then indulges in a crazy bet on a whim, that he can eat 50 hard boiled eggs in one hour. he goes into training like a zen master, and on the big day, just when it seems the impossible folly has brought him undone, he succeeds, lying out in a prone crucifixion pose, sacrificed on the alter for the amusement of the camp. The Christ allegory starts to become apparent from here on in. Luke remains out in the rain on the road as the other guys run for cover, and with 'No Eyes' watching Luke howls at the heavens, 'Let me know you're there!', he looks around and then says when asked what he's doing, 'I'm just standing in the rain, talking to myself'.

Luke is given solitary and locked up 'in the box' upon news of his mother's death being delivered, the Captain afraid he'll want to escape to go to the funeral. The contrarian in Luke reacts, as it's plain he'd mourned the old girl in his own way and would not have gone, but now the idea to escape is implanted and he's compelled to act. 'Calling it your job boss, doesn't make it right' Luke says to the pious guard who locks him up, and who'd offered to say a prayer for his mother and who asks Luke about his own lack of belief in God. Luke escapes during a 4th of July celebration, but is soon caught and sent back to the chain gang, instigating a famous speech from the Captain 'what we've got here, is failure to communicate'...  Luke uses all his wits to escape a second time, this time getting far enough away to send the boys a photo of himself in a ritzy bar, with two beautiful women in his arms. The image becomes a sensation in the prison, Dragline able to sell viewing of this 'icon'. Rosenberg casually shows two pages of the magazine that holds the photo, the other side has a lead-line that portentously reads 'the illusion that kills' The photo represents a kind of 'paradise', a heaven that Luke has somehow managed to attain fro them all as Dragline keeps the faith of Luke alive. Luke is returned to the fold, his unlikely 'resurrection' coming by another stroke of bad luck. This time the empire strikes back, the Captain telling him that until he 'gets his mind right' the punishment will not let up. The guards take delight in breaking Luke, having had enough of his crowd pleasing antics, and after a while Luke is a broken man, having had to dig his own grave several times, falling into it as a glimpse into his fate. The guys watch on helpless as Harry Dean Stanton no less, convincingly croons 'Midnight Special', a gospel plea for divine aid and 'Ain't No Grave', another hymn that promises no earthly grave can hold the 'saved',

The men still idolise the battered Luke, who breaks down and tells them the picture was a fake, he paid the girls, and screams at them to 'stop feedin' off me'. In an allusion to the 'last supper' Luke is given a huge bowl of rice to eat, the box being punishment for failure to finish it, but his 'disciples' take mouthfuls for themselves to attest to continued belief. Luke has his 'garden of Gethsemane' moment as he asks God 'Where are you now'? 'No Eyes' watches on. Luke is soon back on the chain gang, but doing all of the menial work for 'No Eyes' like a trained poodle, the men are dispirited as Luke plays various versions of fetch. Luke then grabs the keys to a truck, and with Dragline hopping on unexpectedly he speeds off, 'No Eyes' unable to shoot because of the raised rear tray, a visual nod to Warner Bros own '30's classic  I Am A Fugitive from a Chain Gang. Luke tells Dragline they need to split up, more or less recalling a 'my work here is done' moment in Christian mythology. Luke heads out alone, but passing a small church he enters instead of running, and starts a conversation, he tells God in effect that he feels he's never dealt him a 'cool hand', in other words he's been trying to cope on his own terms with no help from above, and tried to reconcile his path in life, 'you made me like I am, he yells. Police cars arrive and Dragline enters, telling Luke he's cut a deal (disciple betrayal) and to surrender. Luke has no intention of returning and effectively brings on his own death by opening a window and saying 'What we have here is a failure to communicate', whereupon 'No Eyes' shoots him in the neck.

For all it's entertainment value and the charm of it's leading man Cool Hand Luke is a dissertation on the nature of belief as much as anything. Men need to form common links in order to survive, mythology of all kinds helps to make these connective memes do just that. Luke is like any 'leader' and if enough disciples spread an 'accepted' version of his story then a myth can be built and can indeed flourish beyond the lifetime of the central figure. When we construct immortality myths into the bargain then literally the sky's the limit. Newman gives a brilliant performance of a man caught in a hard bargain, following his nature at one point, no matter the personal cost, and feeling the burden of what his actions represent to others who live vicariously through him. Dragline perpetuates the 'myth' at the end, pointing to the church and telling the guys that Luke was smiling, as the torn 'paradise' photo appears glued back together, Rosenberg visually sealed the deal by having Luke's 'hearse' run over and crush 'No Eyes' reflector shades. One myth displaces another.

Rosenberg's career never really hit the heights, but he proved himself a competent and capable director, working several more times with Newman, and here his command of the visual palette is fine, and obviously his work with large groups of actors in television served him well for handling the nuances of a large ensemble cast. George Kennedy won several awards for his Dragline and Newman won many, but the Oscar for Best Actor would mysteriously continue to elude him. An entertaining, thoughtful and iconic film, with more going on under the surface than you'd think. 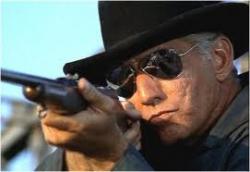 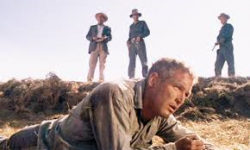 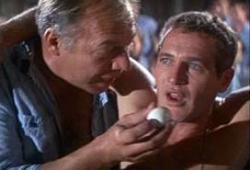 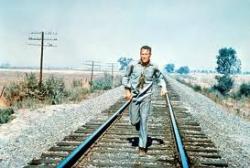 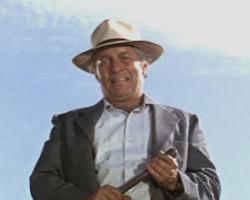 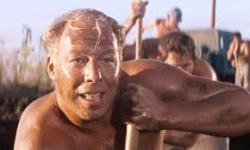