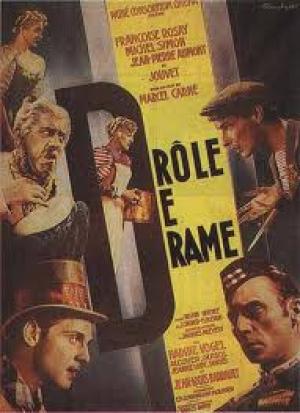 Marcel Carné and Jacques Prévert continued their fertile and productive partnership with this 1937 piece of droll frippery, an elegant and layered comedy of manners and class that pokes gentle fun at the institutions of religion and law. Oddly enough, the piece is set in London, adapted from a novel written in 1912 so it's a rare pleasure to watch the French stick it to the English in an elaborately plotted faux drawing room farceur. Carné employs a couple of the best actors of the era in the iconic Michel Simon and the arresting Louis Jouvet, and his future star of 'Les Enfants Du Paradis' Jean-Louis Barrault. Carné sets a cracking pace as he deflates pompous clerics, over stuffed society matrons, and social climbing bourgeoisie.

The Bishop of Bedford, Mr Sofer (Louis Jouvet) is giving a speech decrying the trend to consumption of detective fiction, seeing it as a sign of the decay of civilised society. Sofer attracts a paltry crowd as he rails against all licentious literature and warns of the dangers of what happens when "you read the wrong books". He has a particular place of hate for one Felix Chapel, whose book 'The Model Crime' is the latest in a string of hits and one of the listeners, William (Jean-Louis Barrault) jumps up and agrees, stating that Chapel's books have led him to become a killer. Undercover police then chase William out of the hall as Sofer notices his cousin in the audience, the botanist Irwin Molyneux (Michel Simon). Sofer tells Irwin 'Detective novel readers are future murderers", not knowing it's Irwin who's penning the Chapel novels secretly due to his lack of income and need for his wife to maintain her social standing.

Prévert keeps the intricacies of the plot front and centre as Sofer invites himself to dinner at Irwin's just as the house servants have resigned. Irwin's wife Margaret (Françoise Rosay) pretends to be away so she can cook the meal and Sofer suspects her disappearance is due to Irwin poisoning her and calls Scotland Yard. Irwin parks her in a cheap hotel in the Chinese quarter and there she encounters William who falls in love with her. Irwin who has returned to his home as Chapel to write a piece on Bedford and William wants to kill Chapel for 'turning' him into a killer. Bedford ends up being a suspect in the 'murder' of Margaret and a mob demands he be turned over to them.

The Bishop, of course, has a flaw and in this case it's the usual showgirl scenario, plus there's a twist with Irwin's activities in relation to the fake poisoning. William loves animals and therefore kills butchers, and there is a sub-plot with the milkman! Carné uses some neat sight gags that hark back to the silent era, Bedford and his militaristic control of his bevy of children, and a unique method of flower collection by the docks. William is shown naked to Margaret in a neat allusion to a classical nymph and her pretensions to an upper class lifestyle. Simon is at the height of his powers here and makes the most of his multi level part, and Barrault is very fine as the murderous and loving William. Jouvet plays the put upon straight man very well, and manages to keep a stiff upper lip even in a kilt.

Marcel Carné and Jacques Prévert embarked upon the golden period of their collaborations after this light hearted confection and proved equally adept at examining the darker side of human nature in their masterful poetic realist films 'Port of Shadows' and 'Le Jour Se Leve'. Drôle de Drame indicated that they were able to incorporate comedy and a light touch in their work, and it served them well in their masterpiece 'Les Enfants Du Paradis', which melded drama, comedy and tragedy in a sublime way.