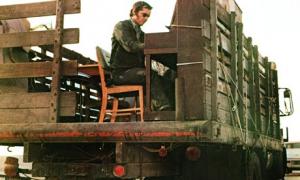 Jack plays in a minor key

Bob Rafelson's thoughtful and meditative reflection on alienation and existential angst perfectly captured the mood of the times, and further catapulted the ascendant star of the irresistible Jack Nicholson into the collective public consciousness, setting the scene for the actor to dominate the coming decade as few others before him. The screenplay by Nicholson friend Carole Eastman, under the pseudonym of Adrien Joyce, and working from a story idea of Rafelson's contrasts the high culture of the classical music world with that of the simple pleasures of the proletariat as represented by the various bowling alley denizens on display and the oil rig workers in the fields of Southern California. Rafelson believed Nicholson could become a star actor with the right role and was mildly peeved that Dennis Hopper got in first by giving him the role of the southern lawyer in Easy Rider, a perfect cameo that marked Nicholson for the big time, but Five Easy Pieces allowed him to stretch out show his depth in an 'A' feature leading man part.

Bobby Dupea (Jack Nicholson) is working the oil fields, heavy, physical work and after his shift he drops in on his girlfriend, short order waitress Rayette (Karen Black) to the strains of Tammy Wynette and Stand By Your Man. The relationship is a prickly one, "you're never satisfied" says Rayette., and soon Bobby is chasing some party girls with his oil working buddy Elton. In a memorably staged scene the impatient Bobby gets stuck in a traffic jam with Elton on the way to work, and he gets out and jumps on a furniture moving truck ahead of him which has an out of tune piano on board, as the traffic horns honk Bobby adds to the dissonant cacophony by playing a complex classical piano composition. In a nice piece of foreshadowing Bobby stays on the truck as it gets off at an exit while Elton continues to work. Bobby and Elton have an argument at work, Bobby taking out his frustrations and in a telling moment he intimates that he is 'better' than Elton. Bobby quits the job and drives to L.A to see a recording session his sister Partita (Loius Smith) a piano virtuoso but with a nagging flaw, she sings out of tune to herself while she plays, transported by the music. She informs Bobby that their father has had two strokes recently and that Bobby should visit him before it's too late, hinting at a divide bewteen father and son.

Bobby determines to leave for his ancestral home, and has an episode of vigourous sex with the good time girl Betty (Sally Struthers) before informing Rayette he's leaving. Fearing the depressed Rayette is suicidal Bobby reluctantly offers that she accompany him, ad they set off for Washington State. They pick up two lesbian hitch-hikers, and in a hilarious sequence one of the girls rages against consumerism and all the 'crap' in the world, it becomes a running gag until Rafelson has her look directly to camera and say "I don't want to talk about it". The famous diner scene occurs on the trip, where Jack seared his screen persona of the edgy rebel into our collective retina's, even if it's not the tone of the rest of the part, but it showcased an actor with incredible range, and the ability to hit this emotional note led to roles that were more fully invested in this area of his character.

Bobby is embarrassed by Rayette, and leaves her at a hotel while he continues on to the family home, leading us into a world of culture and refinement. At dinner we meet his stitched-up brother Karl (Ralph Waite) who's stiffness is further underlined visually by having him in a neck brace, and Karl's girlfriend Catherine (Susan Anspatch) who is also a classical musician. Bobby is now crucially Robert at home, a subtle divide for the two worlds he inhabits, his opinion of Karl revealed earlier when he called him a 'fiddler', an insult to a classical musician who plays the violin. The brothers re-visit a competitive streak with a table tennis match, and when Karl is away for the night Robert moves on Catherine. She asks him to play for her, and he relents, only to see her noticeably moved by the emotion of his playing. he laughs at her reaction, "I faked a little Chopin, you faked a reaction", but she insists her feeling was real, while he admits he felt no emotion while playing, demeaning the piece as "the easiest thing I could think of, I played it better when I was 8".  Robert seduces Catherine, only to have the frustrated Rayette arrive under her own steam, having been sidelined for 2 weeks and leading to the collision of the two worlds of Bobby/Robert. Catherine declares her lack of interest in leaving with Robert, and Robert attempts a rapprochement with his father, in a beautifully weighted scene where Robert wheels him out into the countryside and admits his shortcomings. Bobby leaves with Rayette, and in a scene worthy of maestro Antonioni he parts company with the hapless waitress at a truck-stop in the middle of nowhere.

Five Easy Pieces is a film about a man in crisis, unable to love himself and therefore finding it impossible to ask for 'real' love in return, not seeing value in the cartoon-ish and stultifying love that Rayette represents. Robert hates the identity that was bequeathed to him by 'nature', the subject of an intellectual discussion at the house that leaves Bobby enraged. He defends Rayette against a supercilious academic, "you pompous celibate", and in those three words he sums up his dilemma. Sensing a life beyond the disciplines of imposed and inherited virtuosity, he railed against his 'nature' and went looking for meaning by plying his piano playing skills in Vegas, by chasing casual and meaningless sex, by hooking up with an ill-educated, southern, country music loving girl, and by summoning up as much rebellion as he could manage, only to find that this world couldn't fulfill him either. Unable to articulate his frustration he confronts his father, and it's the only scene where Robert shows a real emotion other than anger, and is superbly realised by Nicholson, who deservedly won a nomination for Best Actor at the Academy Awards. Karen Black is wonderful counterpoint as the confused and warm hearted Rayette, and won a Best Actor nomination for her performance. The expressive tones Rafelson found, together with the brilliant cinematographer Lazlo Kovacs, and superb framing of the film belied a director at the early part of a few hot years, and the result was an instant American classic to further fuel a cinematic Renaissance. Both actor and director teamed again for the silmilarly toned The King of Marvin Gardens, and later for the noir homage re-make of The Postman Always Rings Twice, and as fine as those  two films are, with Five Easy Pieces they got it right the first time. 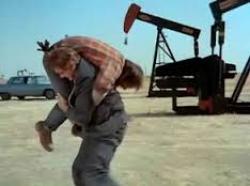 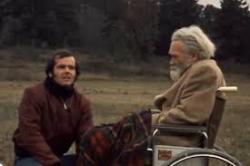