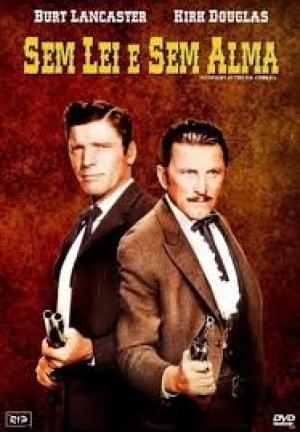 Gunfight at the O.K. Corral

Ballad of a well known gun

"People's minds like discipline, so, like the ballet, westerns are always done the same way. If you go hear Beethoven, you don't complain that it was played exactly like the last time. It's not supposed to be different. And a western is a controlled, disciplined, formal kind of entertainment." ~ John Sturges

John Sturges was one of the old school journeyman directors who worked continuously in the Hollywood studio system for over 30 years, regardless of trends, and produced many fine films in the process. Gunfight at the O.K. Corral is his take on the Doc Holliday/Wyatt Earp story, and teams up Kirk Douglas and Burt Lancaster in the roles of consumptive gambler and idealistic lawman respectively in a rollicking tale that eschews the actual history of the confrontation in favour of the myth. John Ford’s publisher in The Man Who Shot Liberty Valance some 6 years later would define it thusly, “When the legend becomes fact, print the legend.” Sturges was happy to play fast and loose with the facts in order to print the legend, bringing the vibrant frontier story to life with a sharp screenplay from novelist Leon Uris.

Wyatt Earp (Burt Lancaster) is a lawman in Dodge City and enjoys a controversial friendship with the notorious gambler Doc Holliday (Kirk Douglas). The pair share an unlikely bond that is later rekindled in the outlaw town of Tombstone, where Wyatt has gone in order to help his brother bring law and order to the troubled region. Doc ends up being a central player in the struggle between the Earp’s and the Clanton’s, a ranching dynasty headed by the ruthless patriarch Ike Clanton (Lyle Bettger). Wyatt has ambitions of heading further west to set up in California with his girlfriend Laura (Rhonda Fleming) but family honour intrudes and the Clanton’s face off against the Earp’s and Holliday in the legendary shootout.

Westerns were grist for the mill in the late 1950’s, fodder not only for cinema but especially for TV, a then fast-growing slice of the entertainment pie. Sturges filmed this riff on the well known theme between the cinematic maturity that westerns enjoyed on the back of their re-embrace by John Ford and Howard Hawks et al, and the rise of the rawer, revisionist westerns some 10 years later. What sets the Sturges film apart from other contemporary westerns is that the film is essentially a love story at heart; but not the cowboy and the lady type, more the love between Earp and Holliday. Even though each character may be theoretically on opposite sides of the law divide, they share a code that unites them in a way that transcends societal expectations. The romantic quotient between these men and their women is handled with a different energy by Sturges, the interactions between Wyatt and Laura are conventional and predictable, but the scenes between Doc and Kate are full of pathos and self-loathing. The too-seldom-seen American theatre treasure Jo Van Fleet appears as Doc’s ‘love’ interest, and she is marvellous, adding depth and nuance to a difficult role. It’s a pity she didn’t get more screen work, but in a role that could have been little more than a faded showgirl/hooker cypher she imbues it with depth and resonance and the scenes are amongst the most memorable and effective in the film.

The stream of buddy-buddy films during the New Hollywood period might have been kick started by Butch and Sundance, but close male friendships have been part of Hollywood tropes for decades, probably best exemplified by Rick and Renault in Casablanca. The trend was also reinforced by the unlikely success of Easy Rider, where one of the central ‘outlaw’ characters was deliberately and ironically named Wyatt. All of the films hang on the authenticity of the central characters relationship, and also, in no measure, the charm and charisma of the key performers. Douglas and Lancaster had worked together before, but it was during this film that they became lifelong friends, ultimately making five features together and even co-starring in a play in later life. The chemistry between the pair is undeniable, born of a mutual respect that was able to survive the prickly nature of both men.

John Sturges turned to veteran cinematographer Charles Lang to shoot the piece, and it was scored by Dimitri Tiomkin, composer of many memorable western scores like High Noon and Rio Bravo. Sturges cast an able and talented roster of supporting actors, including John Ireland, Lyle Bettger and Earle Holliman, as well as bit parts from future luminaries like Dennis Hopper, Lee Van Cleef and even stalwart western character Jack Elam. Sturges became the action director of choice in the last part of his career and enjoyed blockbuster success with both The Magnificent Seven and The Great Escape, Hollywood tomfoolery at its finest. Gunfight At The OK Corral remains a career highlight, a mythic and layered re-telling of a well know tale, done with the highest professionalism the studio system could muster and helmed by a consummate, no-fuss craftsman – what’s not to like?