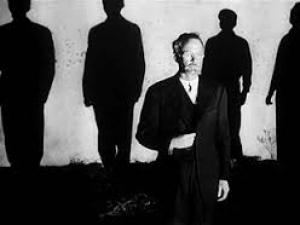 Bert and Fritz go to war

Austrian born, German exile Fritz Lang, a not particularly political character, was in the middle of his most vibrantly political phase of filmmaking in Hollywood when he teamed up with fellow exile Bertold Brecht to make the stinging, Hangmen Also Die in 1942. The turmoil in Europe that caused the half-Jewish Lang to flee the Nazi regime obviously informed much of his cinema during this time, but the pairing with Brecht offered the most overtly political opportunity for Lang to make a statement, a decision that would cause him to be briefly blacklisted a decade later during the hegemony of HUAC.

Czech people are under the Nazi jackboot and led by Heydrich, a Nazi administrator in Prague known colloquially as the ‘Hangman’. An unlikely assassin Dr Svoboda (Brian Donlevy) takes care of the collaborator, forcing severe Nazi reprisals against the wider population. Professor Novotny (Walter Brennan) is arrested in the sweep and his daughter Mascha (Anna Lee), who unwittingly aided the assassin during his escape, pleads with the gunman to give himself up to save the life of her father. The Gestapo net closes in on the pair as they argue the merits of surrender over fighting back.

Very few Hollywood studios chose to confront the crisis of European fascism head on; most fearing a loss of business in those territories in Europe as a result. A couple of exceptions that pre-dated America’s entry into the war were Anatole Litvak’s Confessions of a Nazi Spy, for Warners and Frank Borzage’s The Mortal Storm for MGM.  Wisely perhaps, Borzage stayed away from overt politics and instead rendered a situation where the disruption to family life is a central theme, as well as the truly Borzagian motif, the impact on true love and lovers. Lang and Brecht opt for the same shattering impact of fascism on a ‘normal’ family, in this case the Novotny’s, a middle class one led by the patriarch Novotny, also a teaching professor as in Borzage’s piece. The difference between the two films exists in Brecht’s choice to show a people fighting back against terror, standing up to the blackshirt thugs, at an horrendous cost, rather than focusing on people fleeing to seek a better life away from the problem, which is ironically exactly what Lang and Brecht did.

Heydrich was one of the most repulsive of the elite Nazi’s, and that’s saying something! He was one of the organisers of Kristallnacht and also of the evil ‘final solution’ for Jewish extermination. The actual history of Heydrich’s assassination was only used as a sketch from which Lang and Brecht fashioned a tale of suspense and fear. The real reprisals cost the lives of over 1300 civilians, with another 13,000 arrested and imprisoned as the Nazi’s ruthlessly pursued the resistance fighters. The killing was done by a squad of British trained Czech paratroopers, who were eventually betrayed by an informant and took their own lives in the ensuing siege by the German SS and Gestapo.

Brecht seemed to want to take a harder line with the politics of the piece, favouring a leftist polemic, but Lang had been working in Hollywood for several years and watered down that aspect of the script, bringing in an American, John Wexley, for a re-write, infuriating Brecht in the process. Brecht wrote in his diary,sees the product of his lab "I feel the disappointment and terror of the intellectual worker who  sees the products of his labours snatched away and mutilated." He also wrote of Lang’s commercial accommodations,  “He sits with all the airs of a dictator and old movie hand behind his boss-desk, full of drugs and resentment at any good suggestion, collecting surprises, little bits of suspense, tawdry sentimental touches and falsehoods, and takes  licenses for the box office.” A dispute over credits had to be resolved by the Writers Guild, giving Brecht a mere ‘story by’ credit, shared with Lang. Lang later admitted much of the screenplay was Brecht’s and that the playwright had got a “raw deal”, and the pair never spoke again after the falling out.

Hangmen Also Die is a superior Hollywood film nonetheless, a synthesis of Lang’s commercial savvy and Brecht’s social concerns. The visual style is pure noir, tight corners and dark rooms, beautifully realised by ace cinematographer James Wong Howe. The score for the film was composed by a Schoenberg trained student, Hanns Eisler, an old friend and collaborator of Brecht’s. Eisler was an Austrian Jew who also fled the Nazi’s, only to fall foul of the anti-communist post war hysteria that engulfed Hollywood and had the dubious honour of being the only accused person by HUAC to be deported, making this statement as he left in March 1948,  "I leave this country not without bitterness and infuriation. I could well understand it when in 1933 Hitler bandits put a price on my head and drove me out. They were the evil of the period; I was proud at being driven out. But I feel heart-broken over being driven out of this beautiful country in this ridiculous way."

Brecht left Hollywood shortly after testifying to HUAC, probably avoiding gaol with the other ‘Hollywood Ten’ and resumed his career in Germany, becoming a theatre legend in time, and renewing his working association with Eisler. Ironically, Lang was briefly blacklisted for his associations with the pair, his agent famously telling him, “There is no blacklist, but you’re on it”! Eventually the ban for the notoriously apolitical Lang was ignored as Columbia boss Harry Cohn signed him to a three picture deal which resulted in the excellent Noir’s Human Desire, and The Big Heat.

Lang makes good use of a mainstream American cast in Brian Donlevy, an Oscar winner for his muscular and brutal Sergeant in Beau Geste, and Anna Lee, who was a John Ford favourite and capable leading lady. Walter Brennan shines as the honest professor, a testament to his surprising range and versitality, but Gene Lockhart steals the show as the compromised collaborator. Lang and Brecht have great fun with a couple of camp and creepy Nazi's, athough tellingly, they never play the pair for laughs. Hangmen Also Die works well at many levels, as a suspense piece, as a propaganda polemic and as a work of entertainment, a fine legacy for Lang’s often neglected American phase. Fritz Lang seems destined to forever live in Hitchcock’s shadow in relation to American mainstream success, but his Hollywood films continue to stand up after many years and deserve more critical acclaim and respect than they have traditionally attracted. 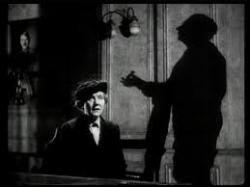 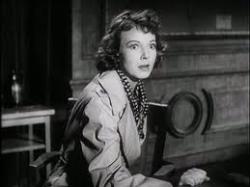 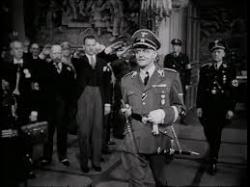 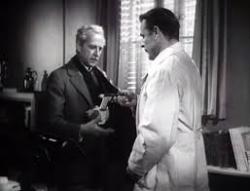 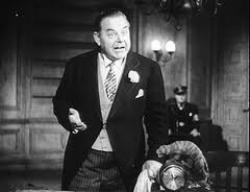