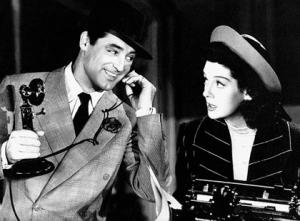 Apparently at a Hollywood party Howard Hawks decided to show how the Hecht- MacArthur play ‘The Front Page’ had the best dialogue of any American play ever written, he read the editor and had an actress present read the reporter. Having decided he’d hit on something he sold the concept to Harry Cohn at Columbia, it didn’t hurt that he’d had a hit for Harry a few years before with another Hecht-McArthur property ‘Twentieth Century’, one of the first ‘screwball’ comedies. He recruited Charles Lederer, who would work with him on several films, and it was Lederer who had the brilliant idea of uping the ante by making the reporter Hildy not only a woman, but the editor’s ex-wife. Cary Grant had made a great comic turn of Hawks’ ‘Bringing up Baby’ and he’d recently made the brilliant and moody ‘Only Angels Have Wings’ with him, they also started work together on ‘Gunga Din’ but Hawks was fired by RKO and replaced by George Stevens. Several actresses passed on the part of Hildy after Hawks rejected Cohn’s request of Jean Arthur, with whom he did not get on, and only 2 weeks before filming Rosalind Russell signed on. Why any actress would pass on a script so sharp and witty can only be imagined at? their loss was our gain.

The plot is merely a device for verbal sparring, but it starts with ace reporter Hildy Johnson (Russell) returning to her workplace to hand in her notice. Hildy is accompanied by a guy who looks like that actor Ralph Bellamy, who is playing her new fiance Bruce. Hildy has Bruce to rub into the face of her ex-husband and boss, editor of the Morning Post, Walter Burns (Grant). She hands in her notice, together with the news she’s getting married the next day. Walter schemes to keep her at the paper, wanting to keep her ability as a writer certainly, but also obviously wanting to keep her to win her back as he’s still in love with her. Hildy introduces Walter to Bruce and the fun begins, Bruce’s naive and guileless ways no match for a ‘stinker’ like Burns. Walter agrees to buy an expensive insurance policy off Bruce, in return for Hildy filing one last story on the execution of Earl Williams, currently waiting to be hanged at the local court house. Hildy joins the unscrupulous denizens of the press in the criminal court building and informs them of her plans, then interviews Earl (John Qualen).

Williams, given the sheriff’s own gun by a bungling psychiatrist re-enacting the crime, escapes and ends up being hidden in Hildy’s desk in the press room. Bruce is kept at bay by nefarious means organised by Walter and ends up in gaol a couple of times, as Hildy struggles to match Walter’s machinations and keep her appointment to catch the train to Albany and wedded bliss. A corrupt Mayor staves off an undesired pardon from the Governor, needing the hanging to help with his chances in the coming election, by bribing the courier. Molly, a girl who was kind to Earl but was slandered by the press buys some time for Earl by attempting suicide. Walter and Hildy are arrested for obstructing justice when Earl is discovered in the desk, but are saved when the courier has a change of heart and arrives with the pardon at the last minute. Walter tries to release Hildy to Bruce in a moment of decency, but Hildy knows where she belongs and together they leave for Albany, a new story and their own wedding.

A plot summary is pointless in many ways, this is a symphony with words, written by maesto’s and played by virtuoso’s and conducted by a master. The sparkle and wit in every phrase keeps the momentum going at a cracking pace which does not falter from start to finish. Sometimes it’s a quartet arrangement and other times a trio or duo, but the harmonies and contrapuntal moves are perfection, the restaurant scene between  Hildy, Bruce and Walter has the crispness and precision of a Mozart string trio, the raucousness of the press room recalls the verve and energy of the Jimi Hendrix Experience, but not a note is wasted. The telephone set up in the press room gives a nice metaphor for communication, enabling Grant and Russell to have multi-levelled dialogue, adding to the verbal and visual fun. The camera moves are mostly unfussy, the challenge would have been for the sound recordists, but Hawks avoids the purely stage-based confines of the piece by adroit use of some physical comedy, Hildy’s crash tackle of the Doctor a highlight. There is even some almost ‘post modern’ self awareness in the use of Ralph Bellamy’s name, and Grant’s real name Archie Leach. The barbs at the ethics of the fourth estate are well placed, the Rashoman-in-a-minute routine when Earl is led out of the room and 4 one-line versions of the event are relayed via phones as it happens to the various news rooms, and all completely different, is priceless. Some real drama is introduced to balance the ledger now and then, including a lovely piece of writing on ‘production for use’ applied to the gun Earl used in the shooting and to the gallows built for his hanging.

Grant and Russell both sparkle as the combative couple and in the end the result of the ‘battle of the sexes’ is a draw on points. Hawks was not known for handling strong female roles well, but here we have a situation where Hildy is the equal of Walter not the doormat more common in female roles of the era. Hawks made many brilliant films, in any genre he set his hand to it seems, and with this to add to his ‘screwball’ roster he can at least claim pre-eminence in that class, and given the quality of ‘His Girl Friday’ , a classic for the ages, his reputation is eternal and deserved He became a favourite of the Nouvelle Vague in the late 50’s and a cornerstone for their ‘auteur’ theory, even if Hollywood never saw fit to award him an Oscar individually for any one film. More fool them. 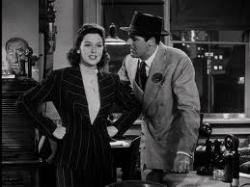 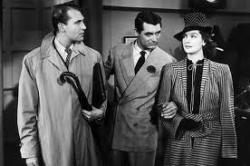 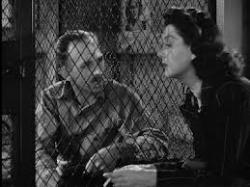 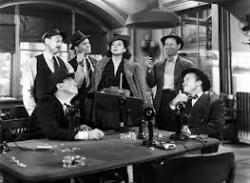 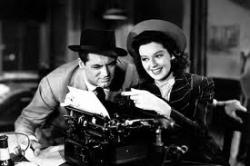