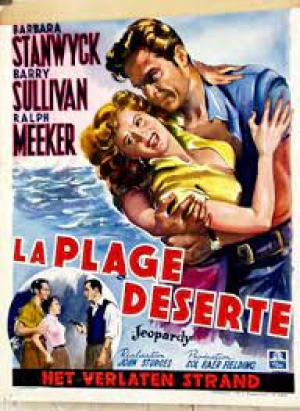 What is a great Stanwyck performance in 1953?

"I couldn't stand being passive. I couldn't play the placid girl." ~ Barbara Stanwyck

Jeopardy is a much-overlooked entry into the John Sturges lexicon, coming as it did before his first critical and commercial hits, and fits as a noir-adjacent thriller that showcases nicely the skills of his small ensemble cast. The film represented a comeback of sorts for star Barbara Stanwyck, who had taken an extended European sabbatical after completing Fritz Lang’s excellent Clash By Night and was considering retirement in the wake of her divorce from Robert Taylor. She returned to Hollywood and luckily for Sturges she decided she needed to work, and he was able to build the gritty thriller around her effortless portrayal of a woman under pressure.

Helen Stilwin (Barbara Stanwyck) and husband Doug (Barry Sullivan) are driving south to the Baja Peninsula in Mexico for a family holiday. They take their young son Bobby and after a fun stopover in Tijuana they arrive at a remote beach that they have entirely to themselves. Bobby is soon playing on a dangerous and rotted pier when Doug falls off after saving him and becomes stuck under a fallen pylon with the tide coming in. Helen drives off to find help but instead finds trouble in the form of a fugitive (Ralph Meeker).

The America that Jeopardy was released into in 1953 was embracing a massive consumerist post-war boom with a rapid expansion of suburban living filling those houses with TV’s and appliances. Gender roles were clear cut, men worked shitty corporate jobs and women stayed home and looked after the kids, Eisenhower was in the White House fighting the Cold War and all was right with the world - except, change was coming. Women were doing more physical work during WWII as a necessity and education was about to create a move towards a counterculture. In the interim there was the illusion of the American dream, and in this regard we can see Helen and Doug enjoying their slice. Doug is an ex-GI and Helen his faithful wife and dutiful mother to their first born. Doug is strong and a provider and Helen enjoys the spoils and rewards Doug with affection and sex, that’s the price she has paid and she’s happy with it.

Helen’s American Dream is turned into a nightmare in quicktime, as Sturges keeps a cracking pace. The first stanza is happy family time as the trio enjoy life on the drive and a day of fun in exotic Tijuana. This is an American family’s privilege, to enjoy life in a poor country as outsiders, making no real attempt to connect with the local culture in a meaningful way. The second stanza sets the scene that apartness from the local culture carries with it risk, with several danger signals being missed by the happy couple as they wind their way south. The chickens come home to roost in the third stanza as Helen is unable to articulate her problem to the locals, until ironically the one English speaking person she finds turns out to have quite another agenda.

The dilemma is framed by Helen’s voiceover and appears to equate it as the feminine equivalent to the then masculine question, ‘How would I react under fire in battle?’  This was a common thread during WWII and its aftermath, indeed it's a key part of the Howard Hawks trope where his male leads are asked 'Am I any good' - and here Helen asks herself the question ‘I always wondered what I would do… what any wife would do?’ Even for a 1953 film the proposition is made clear – If Helen has sex with the fugitive, he’ll help her husband out of the water. Meeker almost drools as he puts the deal to her when he says, ‘I like cheap perfume… it don’t last as long but it hits harder.’  This is an ironic reference to the perfume her husband commented on in Tijuana when she bought it and he said ‘How come when you save me money it costs me money.’

The deal registers in Helen’s eyes, but more than that Stanwyck imbues the moment with something else, something like lust. She is able to deliver the line to the recently escaped prisoner, 'How long since you've... talked with a woman' in such a way we know she doesn't mean talking? Here is a way to explore an area of sexuality she may or may not have been secretly intrigued by – given that a 1950s housewife was not about to express anything of the kind openly. The angel-whore dichotomy is an old trope in Western thought, and it leaves open several intriguing questions in puritanical Eisenhower America hanging, ‘Did Helen do the right thing?’ Given that she saved her husband and in turn her ‘perfect’ life, was the sacrifice she made understandable? She has a chance to save her ‘emasculated’ husband with what tools she has on hand, so would white, Christian mainstream America forgive her?

The film predates Second Wave Feminism, but here there is little doubt that Helen in the hero of the piece where the male is relegated to the ‘damsel in distress’ role as gender assumptions are nicely subverted by the usually macho-centric Sturges. Stanwyck, of course, is the perfect actress to embody the woman who taps new depths to overcome adversity. Barbara Stanwyck was 46 years old at the time the film was made, so her days as a youthful object of desire and romance under the standard Hollywood model were long gone. Meaty roles for older actresses have always been thin on the ground, so her ability to continue to find interesting roles into her middle age and beyond, and make them sexy, was a testament to her tenacity and ability.

Sturges had nothing but admiration for his star, and was very perspicacious regarding her talent, saying ‘I recall one aspect of her approach to her work that struck me as meaningful. I commented one day on how purposely and yet gracefully she moved, the marvellous sense of contained power in the way she walked, stood, sat down, or whatever. She told me years ago in New York she had the standard heel hitting clack-clack jolting walk of a chorus girl, which she was then.’

Sturges was a prolific studio director by the time of this film, having started as an editor some two decades prior, and even though he’d only been directing since 1946 this was his 17th feature! He would go on to be one of the great chroniclers of masculinity under pressure in film with The Magnificent Seven and The Great Escape, so it's fascinating to see him work with a major female star and get a great result, where his eye for framing and sense of pace sets a cracking tone. Stanwyck would play strong, independent women for several more years, making some 20 films in the next 4 years including many of her most memorable roles for Douglas Sirk and (remarkably) for silent era veteran Allan Dwan. This period also included a great turn (with Barry Sullivan again) in Sam Fuller’s amazing Forty Guns, and she made a much underrated western called Trooper Hook with Joel McCrea the same year, exploring the challenging story of a white woman who was captured by Indians returning to white ‘civilisation’ after decades living as a squaw. So much for retirement.

Jeopardy is a fine little drama, elevated by crisp, clean direction form an A-grade studio technician and made memorable by the central performance of one of the great ladies of classic cinema. Stanwyck could take average material and through force of will raise the return for the entire enterprise on the back of her charisma and commitment. She was never less than a pro, never less than watchable and always formidable. 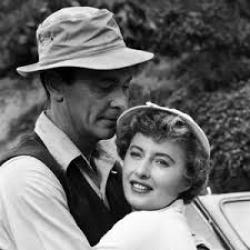 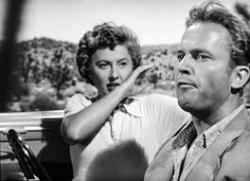 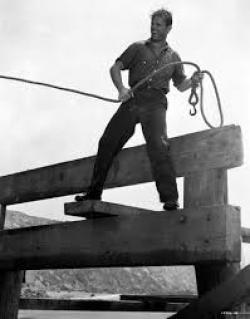 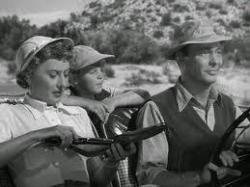 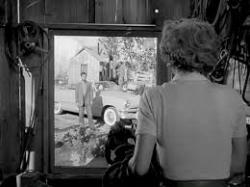 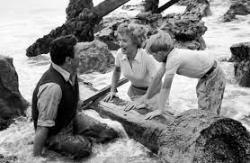