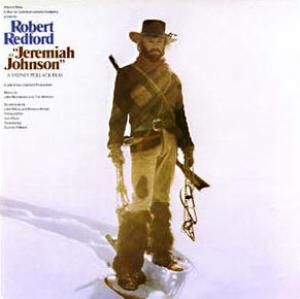 'Nature, red in tooth and claw'

With a script co-written by John Milius and with Sydney Pollack once again directing him, life-long conservationist Robert Redford  travels into the deep mountains of Utah for his timely pro-environmental tome ‘Jeremiah Johnson’. The title character has had enough of what the modern world circa 1846 has to offer, having served in the Mexican war and sets off to find solace and isolation in the wilderness. Using as his launch point a river boat trading post, Johnson sets off with a too-small calibre rifle and a pack animal and taking advice to ‘ride due west, then turn left at the Rocky Mountains’, makes for the high mountain country of the Crow and Blackfoot tribes. In a quest for simplicity and a kind of spiritual purity, Johnson faces luck and disaster in equal measure which tests his mettle as a man and his ideas of what is truly valuable when he is stretched to the limit in order to merely survive.

Johnson rides for days, snow sets in and he finds the frozen body of Hatchet Jack, an old hunter who was wounded in a fight with a bear, but as he lay dying wrote a scratched out will to give his rifle to whoever found it. Local Indians seem to appear out of nowhere, part shadow and part myth and fully integrated into the landscape in ways the white man is not. Johnson, not doing so well and struggling to adapt, next encounters a mountain veteran Lapp (Will Geer) who says he’s he’s known of Johnson’s whereabouts because it’s him he’s ‘been hearin’ for twenty days and smellin’ for three’. Lapp takes Johnson under his wing, not out of pity but because it would be unwise to have ignorant white men roaming the hills pissing off the locals and causing blow-back for Lapp. Noticing the soldier’s pants on Johnson, Lapp comments he ‘must have missed another war’ underscoring Johnson’s decision to leave ‘civilisation’ behind, and reminding us that in the ‘real’ world nothing much changes. Lapp mentors Johnson until he’s able to let him fly solo, including helping him learn how to co-exist with the Crow Indians. After the pair bury a party of white settler’s that were massacred by Indian’s, Lapp departs and Johnson inherits one of the survivor’s, a mute boy he calls Caleb.

An eccentric rogue hunter, Gue ( Stefan Gierasch) buried up to his neck in sand ‘with a fine horse under me’ is saved by Johnson and later he and Gue come across the Indian camp, and while helping retrieve his possessions, to Johnson’s disgust Gue needlessly kills them. They then meet some Blackfoot, who have been ‘Christian-ised’ to some degree, and Johnson in giving a gift of horses and scalps unwittingly forces the Chief to give a greater gift in return, that of his daughter Swan (Delle Bolton) for Johnson’s bride. The new family set down roots and Johnson builds a cabin, bonding genuinely with Swan in the process only to have a US Cavalry unit arrive and press him into aiding them to go to the help of some white settlers. Johnson’s reverie is rudely interrupted here by the instruments of state of the society he rejected, specifically the military and the church, and once again in service to these institutions he’s ultimately made to suffer. He leaves his wife and son and leads them to the settlers, in doing so is over-ruled about going through sacred Indian burial grounds. Upon returning home he finds the Indians have taken retribution for the ‘sacrilege’ of desecrating the burial grounds by killing his wife and son. Johnson purges his past by burning down their home and cremating the bodies. Johnson tracks down the Indians and takes his vengeance, killing the warriors one by one, and in doing so ironically winning the respect of his opponents. Encountering both Gue and Lapp at different times he re-examines what he’s found and what he’s learnt. Lapp asks, ‘was it worth the trouble’?, Johnson replies deadpan ‘what trouble’?, both men realising the hidden costs of living life on the edge. Johnson encounters his Crow ‘bete-noire’ once more at the end and reaches for his gun, across the valley the Indian only salutes him, and Johnson realising he’s been accepted by the Indian’s warrior terms, salutes back.

At one level the film suggests that only by living in harmony with our surrounds can humans achieve equilibrium, and showing respect for your environment rather than exploiting it is a sensible way to live sustainably. It also does not particularly sugar coat the native aspect, as the Indians are combative, fighting for survival with nature as well as the invading white men. Gue mentions at the end that the wilderness held ‘no churches, except for this right here, no priests except for birds of the air’, and religion itself in the film was the precursor to doom, the priest with the Cavalry unit agreeing they cross Indian burial grounds against Johnson’s advice. In the Vietnam era we can’t ignore the symbolism of an ex-soldier going bush, indeed it’s never made clear why he left the army, maybe he deserted? he only found out from the Cavalry that the war was over, possibly he was disgusted by what the war forced him to do? This would be a significant sub-text for an early ’70’s American audience. Either way, after decades of the ‘noble savage’ style diet of anthropological analysis and on the coat-tails of the hippie generation’s eulogising of a ’ getting back to nature, man’ attitude, this film was both of it’s time and ahead of it’s time. Redford is very fine in the title role of a man in retreat, and Geer is magnificent as the authentic old mountain goat. Pollack’s direction is crisp and straight-forward, letting the wonderful scenery do all the work, the scenes in the snow are particularly effective.

Johnson, against the odds, has hung on against everything a brutal and indifferent mother nature can throw at him, and found dignity in the struggle, never conquering the environment but coming to terms with living in it. Johnson found acceptance as a worthy mountain man, finally living up to the example Lapp had set and also having learned the hard way the truth in Lapp’s early admonishment ‘you can’t cheat the mountain’. I think somehow when the Woodstock audience of the time were thinking we ‘gotta get ourselves back to the garden’, this wasn’t the kind of country living they envisaged. 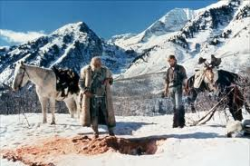 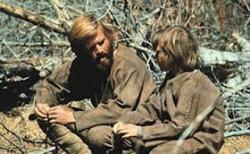 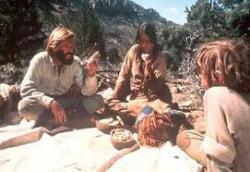