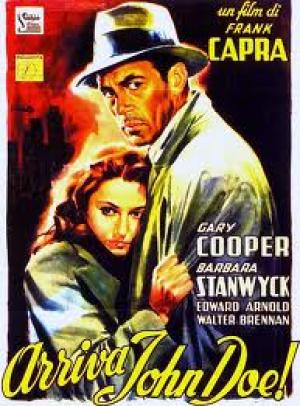 Frank Capra and his screenwriter of 10 years at Columbia, Robert Risken, left that major studio and went out on their own with Meet John Doe,  a Riskin screenplay based on a 1922 short story called  A Reputation.  Riskin reset the narrative for it to become a salient warning against the rise of fascism, then sweeping a Europe mired in WWII, keeping in mind that both media magnate William Randolph Hearst and all American hero Charles Lindbergh had both praised Hitler's Third Reich. Capra first wanted James Stewart as Doe, but eventually opted for his alternate 'everyman' actor in Gary Cooper, and after testing and casting Ann Sheridan in the lead female role he switched to his old flame Barbara Stanwyck when Sheridan fell into dispute with Warner Brothers who were bankrolling the project. Frank Capra Productions, the partnership company Riskin and Capra formed only produced this one film, the creative tension of a writer who had contributed so much to Capra's success being relegated to the shadows of Capra's now enormous fame and reputation proved too much for their relationship to stand.

Ann Mitchell (Barbara Stanwyck) is sacked from her job as a reporter at The Bulletin, as Capra portentously shows their stone carved motto 'a free press means a free people' being chiselled off the front of the building. A new broom sweeps through wanting more "fireworks"  in their copy, and Ann gives her last column the fireworks required by penning a suicide protest letter in the name of John Doe, essentially protesting "Man's inhumanity to man".  The letter causes a political storm which she turns to her advantage and she's re-hired by her editor Connell (James Gleason), to exploit the problem she's created. They audition several hobo's to adopt the identity of the fictional Doe to cover the fact the letter is a fake, and John Willoughby (Gary Cooper) steps up to the plate. The newspaper publishes a series of 'I Protest' articles from John, ghost-written by Ann, and they become a sensation, at which point John runs away. A John Doe movement evolves spontaneously at a grass roots, 'tea party' level, which compels John to come back and support it as it's figurehead. The owner of the Bulletin, D. B. Norton (Edward Arnold) soon sees an opportunity to co-opt the John Doe movement to his own political end, but once John sees how he's been duped and manipulated by Norton he decides the only thing to do is carry out the fictional John's promise of committing suicide on Xmas eve.

Riskin and Capra struggle to walk a line between showing the naked ambition of an American fascist like Norton, "The American people need an iron hand",  as opposed to the everyman populism of John Doe, who espouses overt collectivist, or socialist solutions to the nation's ills. Capra explored the inherent decency in the common man, but personally demonstrated time and again he had little identification with that group, having dragged himself up from their number and spent several years denying the depth of his early penury. Riskin gets the tone right, a remnant of the skill acquired through fashioning the everyman classics at Columbia like Mr Smith  and Mr Deeds,  but also struggles with the consistency of a message that at once warns of demagogue-messiah's and promotes one as the solution, of warning the people of being led by a person who's leading them. The pair painted themselves into a corner as they had not agreed on an ending prior to production and they wrote or filmed as many as five different ones. Capra opted for the soft choice, John lives and is talked out of jumping, and Riskin favoured the choice that saw him end his life.

The piece is heavy with Christian symbolism and parallels to the Christ myth. John is the reluctant messiah, and soon finds he has disciples following him. The message of 'love thy neighbour' is woven throughout the story, and ultimately prior to his self sacrifice (crucifixion) John has a crisis of confidence and denies his destiny. Ann is 'Judas' for all intents and purposes as she's sold him out for furs and diamonds instead of thirty pieces of silver. The trial is the central set piece of the John Doe Convention where Norton-Pilate manipulates the crowd into condemning John. For this allegory to carry through successfully it's essential that John die, and his resurrection in this case would be the continuation of his message via his disciples, but Capra couldn't commit to the parallel narrative all the way and the ending isn't truly satisfying as a result. The core thing that the film points up is the gap between the rhetoric of the Christian message and the ability to live it out. The battle will always be between idealism and grim reality, where the cynical machinations of Norton make it harder for the truly remarkable human impulse of empathy to come to the fore and trump vested self interest.

That said Capra still created a film of force and heart. Riskin's feel for the dilemma of ordinary people is the strength of the piece and Capra's visual acuity is mature and sophisticated particularly in the convention sequence where 1500 extras and fluid camerawork, combined with relentless rain and a sea of umbrellas makes for a stunning and memorable result. John speaks of a people "hungry for something",  relating to them and empathising with them, "We're the meek"  he tells them, contrasted to Norton's rich man-camel-needle scenario. Riskin does manage to convey the depths to which a Norton will stoop to manipulate people, and Connell delivers that telling insight in a speech where he gets drunk and explains to John that he's a sucker for the Star Spangled Banner. Connell tells John the story of his experience in WWI, where he saw his own father die in battle, and the association with that degree of sacrifice and patriotism creates an emotional nexus between the song and its effect that strikes deep into Connell's heart. That someone would exploit that feeling for their own political ends is shameful in his eyes, and this is what alerts John to the scale of Norton's press Tsar ambition. A free press indeed.

Cooper is fine as the reluctant messiah, and almost manages to pull off the cop out ending, and the beautiful Stanwyck is dynamic and wonderful as Ann, who finds the wise words of her dead father are perfect for the post depression times the nation faced. Arnold is simply superb as Norton, cool and measured in his conviction, "You're the fake",  he tells John, "At least we believe in what we're doing".  A deathless line from a clear-eyed American fascist.

Ultimately the intricacies and the politics of balancing an essentially socialist message and an anti big business angle in an age in Hollywood where that was considered suspect by the Dies committee, the first incarnation of HUAC, proved to be problematic, and this interesting and intriguing film never found great critical favour. That Riskin and Capra were never investigated in the late '40's was remarkable in light of the decidedly 'pink' tinge of Meet John Doe.  America still struggles with the idea of socialism in a way other western countries do not, the idea that Barack Obama could be labelled a socialist at any level is a gross misunderstanding of the term. For anyone interested in the political labyrinth of American political thought Meet John Doe  is a fascinating film, but the final words, "There you are Norton, the people, try and lick that",  will ring a little hollow, as the Arnold's of the world have gone from strength to strength in the seventy plus years since those wrods were written. Capra only really made one more worthwhile film, as WWII interrupted any chance of a follow up to this, and after It's A Wonderful Life,  he struggled to ever again prosecute his (and Riskin's) peculiar and singular vision of the American everyman. 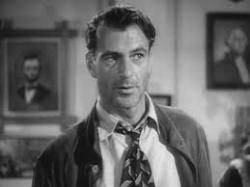 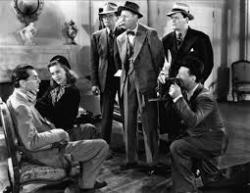 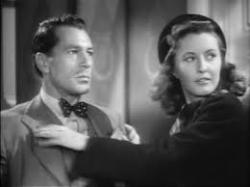 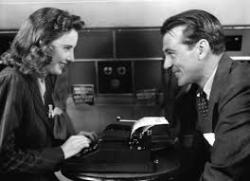 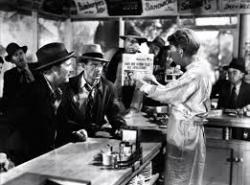 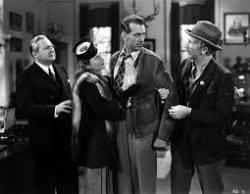 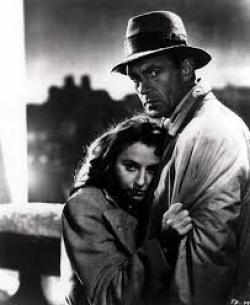