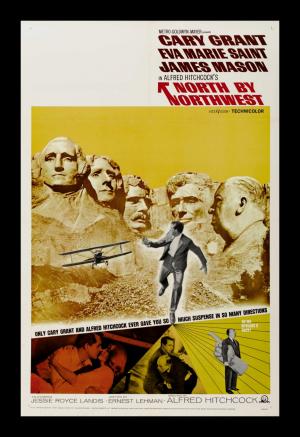 A light thriller with the lightest of touch from Hitchcock, utilising the master of the craft Cary Grant, provides a fantastic entertainment from the striking Saul Bass titles at the start to the train-enters-tunnel sexual innuendo finish. Hitch was teamed with screenwriter Ernest Lehman for an unrealised project by MGM but in doing so they developed a spy story from a Hitchcock suggestion that he always wanted to film a climax to one of his movies on Mount Rushmore, after a chase from the UN building in New York. Lehman constructed a classic ‘wrong man’ confection, undoubtedly influenced by Hitch’s own The 39 Steps. Possibly sensing that the public struggled with the psychological depths of his last film, Vertigo, Hitch settles for a superficially fun spy flick, albeit with the usual Hitchcock sardonic flourishes, although he was to further test the public with his next effort, Psycho.

Part of the charm of North By Northwest is the deliberate pricking of consumerist post war America, starting with the Madison Avenue protagonist, advertising man Roger O Thornhill. His initials indicate the opinion Lehman/Hitchcock have of ad men, and If the hustle and bustle of a business that is all about ‘selling people things they don’t need’, is central to the idea then the suave superficiality of Thornhill is it’s epitome. Hitchcock seems to be saying, charm is not enough and wants to see this mettle tested when it bumps up against cold war deviousness. Thornhill is mistaken by a couple of thugs for rival spy Kaplan and is kidnapped and taken to meet the leader of the group Vandamm (James Mason). Unable to convince the spies he is not Kaplan, they set out to kill him, by filling him full of scotch (no chaser!) and putting him in a car on a winding clifftop. Some uber-mugging from Grant emphasises that Hitch is saying to tjhe audience, ‘This is a movie, relax, he’s going to get away, but then what will happen’? Theatricality and artifice are never far from the surface with Hitchcock, it’s his way of revealing reality obliquely by heightening different visual and performance elements.

Thornhill attempts to get the law onto his side but as in most ‘wrong man’ scenarios they don’t believe him and he sets out to prove his kidnap story, in doing so he’s dragged into a murder at the UN by the same villians. On the run it only remains for Hitch to weave in the inevitable blonde, this time Eve Kendall (Eva Marie Saint), who appears to be helping Roger until we discover she’s associated with Vandamm. Eve sets up Roger’s trip to the cornfield crossroads where the suave Roger is so out of place he may as well be on the moon. Hitchcock has enormous fun with building the tension and we wonder where the danger lies, only to have it come at him from a very unexpected direction, above. The cropduster scene is justly venerated and an iconic set piece, all the elements combine beautifully, Hitch’s visual wit able to bring off what must have seemed improbable on paper. Roger returns and confronts Eve, and after her place in the puzzle is revealed by a US spook he knows he’s free to follow his feelings and can now trust that hers are real as well. There is however the small matter of saving her from the villians clutches, so it’s off to Mount Rushmore for more visual extravagence,

North By Northwest is littered with throwaway gags, adding to the fun, from the O in Roger’s name ‘stands for nothing’, a sly dig at David O Selznick who Hitch was first contracted to in Hollywood, to James Mason having a sly crack at the Actors Studio method. Vandamms’ key henchman Leonard (Martin Landau) even shows some homosexual traits when dealing with Vandamm at the end, adding an unexpected layer for a film of that era. The subversive elements are there in the pitting of vacuous American consumerist ideals against the political shadow world of the cold war, who’s values seemed to shift on a minute by minute basis, seemingly asking ‘if we’re still fighting, what are we fighting for’? In the end it’s love, for Roger the kind that will give his life some purpose, for once in his life he’s had to work hard at proving his worth, his Madison Avenue suaveness and charm not enough, and he proves himself worthy of Eve.

The look of the film is sharp and the art direction modern, Hitchcock’s taste for the surreal surfacing in the Dali like lines of the modernist house at the end, and in the visual Magritte like ‘cage of trees’ that surrounds Roger and Eve when they meet after the fake shooting. Hitch throws in some signature angular shots, the one atop the UN building as Thornhill runs out is a classic. He puts him in the tightest of situations at the end and then pulls a cinematic rabbit out of the hat to wrap the entire film within a minute. Who else would have the bombast and technical mastery to do it and not leave the audience feeling cheated? Hitch weaves a modernist, cold-war fun-fest, with a dollop of seriousness to prop it up, add in possibly the warmest of his ‘ice blondes’ and Cary Grant and it’s a heady mixture indeed. North By Northwest represents the last of his light comedy thrillers, most of his future films would be dramatic, with the odd black comedy surfacing, and maybe it was also the end of that cycle for Cary Grant, his ageless face just starting to show the odd crack, as I’m sure could be seen on the faces on Mount Rushmore up close. How fitting that those icons all share the finale here 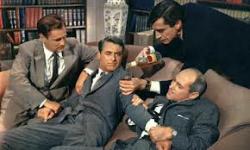 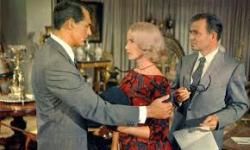