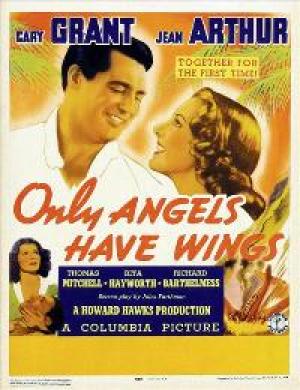 Only Angels Have Wings

Howard Hawks had a long and fruitful association with screenwriter Jules Furthman and their 1939 collaboration ‘Only Angels Have Wings’ is one of their best. Hawks, having done ‘flyer’ pictures before, including ‘Air Circus’ in 1928 and ‘The Dawn Patrol’ in 1930, gave the story to Furthman who crafted an economical and authentic script, set in the port tonn of Barranca in Sth America, In a kind of reverse of the situation Furthman scripted in Von Sternberg’s Morocco, the showgirl Bonnie Lee (Jean Arthur) sails into port, but this time the one with the emotional baggage is someone else, namely Geoff Carter (Cary Grant) the owner of a small airline that flies mail over the Andes mountains. Carter runs his little group of flyers hard as he’s trying to keep a lucrative contract and the trial period is fast coming to an end. The men therefore live hard and full in the recreations they enjoy in the downtime in Dutchy’s bar attached to the airstrip, and Bonnie is soon led into there by two of the flyers, Joe (Noah Beery Jr) and Les (Allyn Joslyn) trying to woo her during her stopover.

Joe and Les are all puppy dog energy around the attractive Bonnie when Geoff makes his entrance, and Hawks frames him like some avenging cowboy, moody and imposing, a man amongst boys. Joe wins the steak dinner with Bonnie, but Geoff needs a flyer to do a short run and it’s Joe’s turn on roster. The flight is dangerous due to the capricious weather, Joe turns back and eager to have that dinner tries to land against advice and is killed. Bonnie soon realises that this is all part of their daily struggle, but is shocked by the outwardly callous way the flyers deal with the threat and reality of imminent death, exempified by Geoff eating the dead man’s steak. Bonnie is no pushover, her father was a trapeze act who worked without a net, so the idea of risk taking is in her blood. She even agrees to go to Geoff’s room in a knowing way not common for the films of the era, and it’s her attraction to Geoff that keeps her from sailing away, against the advise of veteran flyer and Geoff’s best friend  Kid (Thomas Mitchell). Geoff responds to Bonnie by stating that he could not ask any woman to be with him under the conditions with which he has chosen to live. She senses that his stance is as much a cover for past hurt as it is a way of distancing himself from emotional commitment.

Emotional investment is only overtly displayed in the friendships between the flyers, none moreso than between Kid and Geoff, in fact at one point as Bonnie is wrestling with the issue of staying with Geoff she says to Kid. ‘I wish I could love him like you do,,, you love him, don’t ya Kid?’ It’s only at the end of the film Geoff allows his emotion for Kid to come to the surface. Into this mix comes a flyer with a dark past, connected to both Kid and Geoff, Bat McPherson (Richard Barthelmess) is married to Geoff’s old flame Judy (Rita Hayworth) and was responsible for the death of Kid’s younger brother by bailing out of a plane. Bat needs to prove himself and find redemption in an unforgiving group, and does so by taking the most dangerous jobs. The men give Bat the cold shoulder (‘a man can die but once’) and force Judy to take solace in the bottle. Bonnie sees the life Judy rejects but finds herself able to offer unconditional love to Geoff, not requiring him to change for her. Bat finds redemption through courage, but Geoff needs a different kind of courage to find happiness. Geoff sees Kid’s lonely death, and knows he needs to let himself commit to Bonnie, tossing Kid’s two headed coin to indicate his love (’head’s you stay’)

The filming of the actual flights is beautifully done and the landing and take off on the table top mesa are tremendously effective. The art direction is gritty and authentic and the photography by Joe Walker, one of the true masters of the era is first rate and even the model plane work is still convincing. Walker shot virtually all of Frank Capra’s films, including the visual masterpiece The Bitter Tea Of General Yen. Hawks made many memorable films, in a variety of settings but one theme he returned to constantly was the interaction of groups of men under pressure. His comedies are often focused on the lead male-female and the sparks that fly when sexual attraction strikes, and this film has a degree of both situations, Grant being the link between the two. The performances are wonderful, Grant being superb as the cynical and scarred boss, Arthur lovely and pitch perfect as the heart of gold showgirl, and Mitchell being, well, Mitchell. Rita Hayworth is stunning as the young ex-love and it’s plain to see the camera loves her, but she’s a capable actress here and holds her own. Harry Cohn knew Columbia had a potential star on their hands after results like this.

Hawks, who had made the delightful Bringing Up Baby with Cary Grant just prior to this, and made the screwball classic His Girl Friday soon after, treats the serious business of how the flyers relate to each other and deal with loss and intimacy with surprising delicacy and sophistication. It must have been a bittersweet proposition for Hawks filming any projects that involved plane crashes as his brother Kenneth Hawks, a film director himself who was married to Mary Astor at the time, was killed in a plane crash in 1930, ironically the year Hawks had his first big hit with ‘The Dawn Patrol’. ‘Only Angels Have Wings’ also represents a Hawksian grouping of men-who-risk-all, where macho posturing is ultimately seen as futile and true connection can only be made by admitting emotional attachment, however obliquely. There is a sub-text at work in most of Hawks’ films to counteract the surface meaning, and in ‘Only Angels Have Wings’ it’s found in the eternal dance between men and women, trying understand each other and bridge the divide. What this film is telling us is that a man like Geoff, for all his braggadoccian bluff can only be made whole by the love of a woman who understands him, and equally she can only be completed by a suitable match.They are effectively two sides of the one coin, and need each other in ways they don’t always comprehend. A classic film from a golden era. 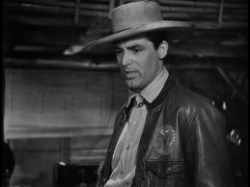 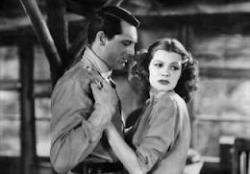 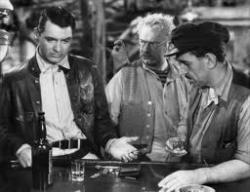 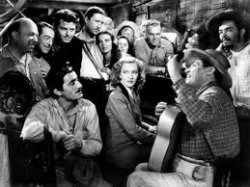 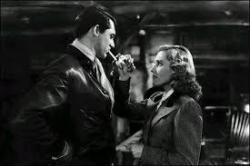 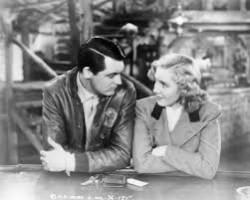