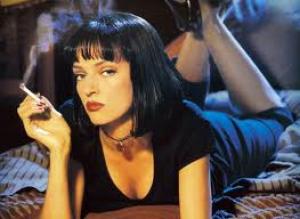 The difficult follow up to a sizzling debut proved no problem to the warped and warp speed mind of uber-geek Quentin Tarantino, as he pumped up the volume in every way with 'Pulp Fiction'. The budget for the second film was 8 times that of his debut, most of it spent on screen to give the film an epic look and feel. producer Lawrence bender convinced box office draw Bruce Willis to join a talented and varied cast, on the same pay scale as the other leads, but with profit participation, and Willis benefited hugely from that decision. Tarantino was able to resurrect the stalled career of John Travolta by giving him the role of his career in Vincent the hit man, his character notionally the brother of the Michael Madsen character in 'Reservoir Dogs'. Tarantino again played with the linear timeline, via a complex structure that allowed him to finish on an upbeat note, after leaving a trail of death and destruction behind him.

The film opens with a restaurant scene, a la 'Reservoir Dogs', where two petty criminal lovers are discussing life and work. Tarantino cuts to two unrelated hitman driving to a job, Vincent (John Travolta) is informing Jules (Samuel L. Jackson) of the nuances and differences between European fast food and American versions. The men do their job and return to their boss, Marcellus (Ving Rhames), encountering a washed up fighter (Bruce Willis) at the club. Butch is supposed to throw the fight for but does not, betting significant money on himself to win. Vincent is assigned the hit on Butch. Butch makes his getaway with his girl, but needs to retrieve a gold watch from his apartment once he realises it's not with him. Butch encounters Marcellus when returning, they fight but before long both men are captured and tied up by a redneck weapons shop owner.

The bare bones plot is only the start point for Tarantino to work his particular style of magic, and is largely irrelevant. The characters form a loose collective of 'types', their respective dilemmas provides an opportunity for them to hold forth philosophically on all kinds of concerns. The post-modernist Tarantino figure is equally at home discussing the properties of miracles and divine intervention, as well as the proprieties of giving a foot massage. Tarantino's 'types' may exhibit a casual racism, or adhere to a particular code or ethos, but all represent a distinct and strong individualism. In Tarantino's world they function within the possibilities of triumph through individual action, there is no collective mentality in this universe; it's Tarantino's law of the jungle. It's appropriate that such an uber-capitalist approach fits the Tarantino viewpoint, as his self-obsessed types crawl and scramble for any advantage they can find. Relationships are essentially narcissistic and disposable, utilitarian in the extreme. Pumpkin (Tim Roth) and Honey Bunny (Amanda Plummer) seem attached to each other only in a juvenile way, reflecting their own selves in their lover's eyes, and the camaraderie of Jules and Vincent is un-sentimental and professional only.

Butch finds some degree of growth via escape, his foreign girlfriend represents a different kind of future, one far removed from his past. Tarantino's characters do not go on journeys of discovery to any great degree, they stake out their terrain and they survive with those confines. Tarantino's 'law' is diluted and made palatable by his trademark and essential wit, and humour may be the defining element that makes the 'law' cohere. Tarantino's post modernist irony may or may not be intentional, but that doesn't matter, it informs and supports all of his situations. His love of classic cinema also fills each frame, as he gives his version of scenes he loves, notably the now iconic dance scene between Uma Thurman and John Travolta. The production company Tarantino formed for this film, named after a Jean-Luc Godard film, 'Bande A Parte', was A Band Apart, and Tarantino wanted the dance scene in 'Pulp Fiction' to pay tribute to the cafe dance of the three characters in Godard's Nouvelle Vague classic. Tarantino continued to display great style and taste in his choice of diegetic soundtrack songs, a quality he shares with the likes of the master of songs in soundtracks, Martin Scorsese.

The actors all contribute to a fine ensemble playing of the quirky types, and Willis and Travolta are stand out's. Bruce Willis made been on a streak of bad films in the wake of his seminal 'Die Hard' breakthrough, and this film gave him range to remind audiences that he is also a fine actor. Travolta had become a parody of himself post 'Saturday Night Fever', and seemed unable to reconcile the movie star persona he'd acquired with the ability to select the right roles. Of course, Tarantino would have been thinking of Vinnie Barbarino as much as Tony Manero when casting Travolta, but the boldness of the choice paid off handsomely. Samuel L Jackson turned in a scene chewing performance as the philosopher-hitman Jules, delighting in the long soliloquies and investing a Zen calmness into the violent and unpredictable proceedings.

'Pulp Fiction' consolidated Tarantino's reputation and confirmed a strong new voice in American film had arrived. Unlike his contemporary in the music world, Kurt Cobain, who shook up an equally moribund and flat music industry, Tarantino stuck around to finish the job, and continues to exist somewhere within and yet beyond the industry, creating a category of one on planet Quentin. His films are, and continue to be, indulgent, overly self-referential, excessively violent and relentlessly hip, and because (not despite) of these characteristics they are essential essays on modern America and it's own image of itself. A (post) modern American classic. 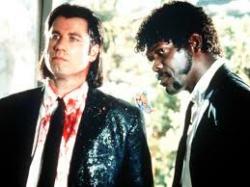 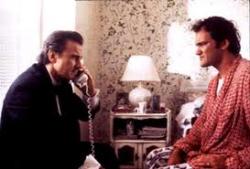 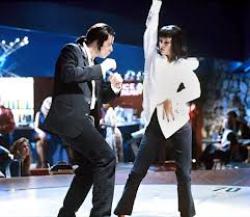 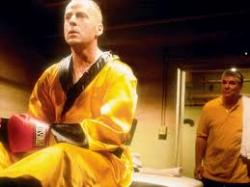 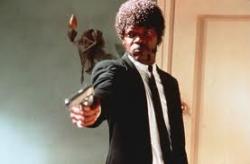