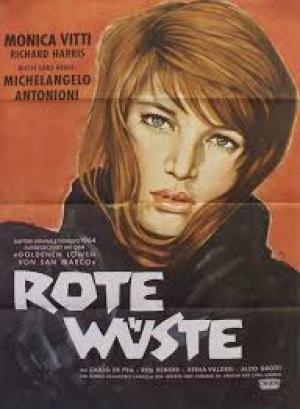 "Despite what people say about my major film roles, I'm not a dull or monotonous woman searching for self-identity."
~ Monica Vitti

After his much admired black and white masterpieces, the so-called ‘trilogy on modernity’ in the early 1960s, Michelangelo Antonioni turned his vision to colour and in many ways produced a companion piece to those three films, the no less remarkable, Red Desert. He turned to his muse and companion Monica Vitti, to again embody the tensions at the heart of the modern human experience and added an English actor to the mix in Richard Harris. Antonioni co-authored the screenplay with his regular collaborator Nonino Guerra and employed Carlo Di Palma as cinematographer, who not only shot the film brilliantly, but also managed to strike a rapport with Vitti that eventually morphed into a long-term romantic relationship.

Giuliana (Monica Vitti) is a mother with a young son, married to an industrialist, Ugo (Carlo Chionetti) - She’s had an unspecified breakdown as the result of an auto accident and is struggling to make sense of her life. Her husband introduces her to Corrado (Richard Harris) a visiting colleague and the two immediately recognise an attraction. Ugo is preoccupied with his work and Giuliana accompanies Corrado as he conducts business, which brings the pair closer and poses the question of just how they will act upon the attraction.

If Antonioni had made his first three films with Vitti as meditations on alienation, then with Red Desert he posted his masters thesis. Environment plays a huge part in those works of genius – the battered, windswept island of L’Avventura, the mansions of the upper-class Milanese in La Notte and the fractured suburbs of Rome in L’Eclisse, but here Antonioni uses an industrial wasteland as the backdrop. Just as the human figures are rendered insignificant in the cavernous natural world of the Mediterranean islands in L’Avventura, they are equally dwarfed by the man-made monstrosities here – the spewing factories, the functional freighters. From within these large canvases Antonioni contrasts the intimate moments of human foibles and anxieties, without ever spelling out cheap and easy answers he realises, as most significant artists do, that ambiguity is the artists’ friend.

Antonioni made Red Desert as his reaction to the availability of colour, and in many ways he attacked the problem as would a painter staring at a blank canvas. He begins with an industrial hell-scape, the banal smokestacks, the rust covered pipes and pumping machinery in service of utilitarian production, indicative of the post-war thrust to modernity in Italy. Into this environment he quickly introduces humanity, in the form of a young woman (Giuliana), arriving with her child to see her husband. Real life arrives in a lifeless place, a woman and child, isolated and vulnerable and Antonio begins his symphony of contrasts. The colour scheme in the factory and surrounds, the greens and browns that Antonioni employs, are bland and diffused and the woman and child blend in at first, stumbling through the landscape before we get a sense of their separateness.

If the film is a journey of Giuliana discovering herself, whilst recognising the emptiness of the life she has settled for, then Antonioni highlights her struggle with the colour red, which is also a code for sex and vibrancy. Giuliana is shown eating an ‘aphrodisiac’ in a red room with her group of friends as the sexual tension between her and Corrado builds, and they embark on a dance of seduction or at least hint at the possibility of seduction. Antonioni also suggests a bored bourgeoise eating itself, as the group begin burning the wood from the room that surrounds them for fuel.

Antonioni seems to contrast an inescapable or inevitable modernisation against the human response amongst Giuliana and her peers and slyly places contradictory visual clues as a comment on progress – witness a huge freighter seemingly moving through a forest. The group wander in a fog near the large boat, but mostly they are wandering in a fog of ennui. Giuliana is a woman in existential crisis – typically the men blame her sexual ‘problems’ on her car accident and a perceived neurosis, but in the world she inhabits she struggles to find her place and the key question she faces is around her sense of self in a changing world. Even her child exploits Giuliana’s insecurities as he fakes an illness to get her attention.

Red Desert solidified the glorious Monica Vitti’s international reputation as a major movie star, but as a dramatic actress and not as the comedienne she wanted to be at the time. After expressing her wish, Antonioni promised to make her the new Carole Lombard according to Monica, but the first outing after the ‘promise’ was La Notte, where Vitti had a smaller, lighter role and ceded the star role to Jeanne Moreau, but the second was Red Desert, not a laugh a minute. Nonetheless the role is one of Vitti’s finest, she captures an essence of exquisite brittleness in her characterisation, and she was never more beautiful. She soon pursed lighter roles after she and the maestro spilt up as a couple, but her name is forever linked with his as one of the quintessential director/star teams in all of cinema, and rightly so.

In a sense, characters in Antonioni’s films have to get lost in order to get home, even if his human characters are insignificant compared to massive modern creations like buildings, factories, ships – spaces where humans are doomed to measure themselves and take personal inventory of the soul and mind and heart. He created worlds where exterior space and absence of humans are as significant as their presence or their interior space. Red Desert was Antonioni’s first direct dip into a colour palette and is a memorable and beguiling entry in his series of modernist masterpieces, where too much ennui is barely enough. 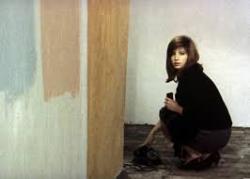 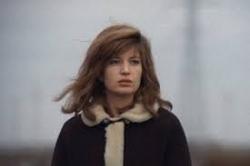 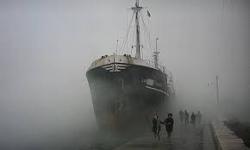