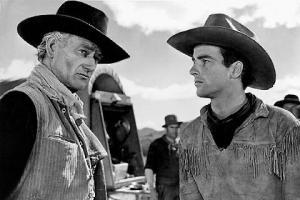 Oedipus wrecks, or mutiny on the prairie

Howard Hawks was never one to do things by halves, and after his excellent work on the aborted western The Outlaw, in the early ’40’s was usurped by it’s producer Howard Hughes and turned into a glorified bra advertisement, he re-visited the form properly with Red River and created a classic. Hawks took his unit out on location and the results achieved by Russell Harlan’s breathtaking black and white cinematography are amongst the most beautiful and beguiling on screen. Hawks took his great friend John Ford’s leading man, John Wayne, and used him in a way that surprised the old faux-Irish bastard, "I didn’t realise the big sonofabitch could act" said Ford disingenuously when shown the results. Once a dissembler, always a dissembler. Western writer Borden Chase wrote the screenplay from his own short story, and he would go on to be a significant component in the Anthony Mann and Jimmy Stewart series of westerns in the early ’50’s.

Hawks frames the early scenes with a sparseness and eloquence that belies his macho bravura, as the simple poetry of the setting and narrative sets the tone for a human drama in a mythical open landscape, inner freedom versus outer freedom. In a crisp and nuanced set-up we see Tom Dunson (John Wayne) assume parental duties over a young boy orphaned on the trail, then as the boy, Matt Garth (Montgomery Clift), grows to be a young man, we find Dunson’s life’s work threatened by a flat beef market post civil war in the south. Dunson resolves to take the hazardous journey north to Missouri to sell his cattle there, and Matt, Dunson, Groot (professional side-kick Walter Brennan) various cowboys and 9,000 plus cattle hit the trail. The travails and stresses of the trek take their toll and soon Dunson is acting like a tyrant, enforcing compliance at the end of a gun. Matt leads a rebellion against Dunson and assumes control of the herd, and re-directs to the more reasonable destination of Abilene in Kansas, gambling that the railway has been able to establish itself there. Dunson is left behind, but plots revenge and vows to kill Matt, and they meet for a final showdown in Abilene.

Hawks explores the richness of the old bull-new bull battle in various ways, and layers it with small touches that enrich and reveal. Dunson’s guilt at leaving his girl behind on the trail, only for her to be killed in an Indian attack, is reincorporated into the narrative and compounded in the figure of Tess (Joanne Dru). Dunson discovers that Matt has fallen in love with Tess, who was then left behind by Matt, and with Dunson’s mother’s bracelet. Matt always knew he’d have to prove himself to deserve to be a half share in the ranch, and to gain his initial on the Dunson cattle brand, but he initially rejects that it will be on Dunson’s terms, in gunplay and violence. Matt’s journey and challenge is to not duplicate his adoptive father’s mistakes. Matt realises the thing that has left Dunson incomplete and unable to be satisfied, the thing that has left him capable of descending into a sub-human obsessive trance is the love of the woman he lost. matt instinctively knows he can’t take the same path and have any self-respect. Tess acts as the catalyst to resolve the stand-off, and after the father and son pair have had their say with mutual violence she is able to stop them and have them recognise the love that they have for each other.

Hawks again has his professional grouping of men, indeed for a period of nearly an hour and a half it’s a film devoid of women, the closest we get is Groot, who for all intents and purposes has filled the role of Dunson’s wife for 14 years! Dru fills the function of the perfect Hawks woman, like Jean Arthur in ‘Only Angels Have Wings’, where she knows her only hope of completing herself is to complete and compliment the conflicted Hawks hero. It’s actually the definition of a romantic and poetic resolution which lies at the core of so many superficially machismo oriented Hawks films. The Oedipal theme is maybe one Hawks wasn’t about to brag about, but it’s as present as the cattle, "I thought I had a son" Dunson spits, and ultimately Matt, aided and abetted by Tess, wins on his own terms and not on Dunson’s. The king is dead, long live the king. Dunson can now pass happily into the pages of history that Hawks was visually turning, knowing he has a son and heir and also with prospects for a third generation.

Red River is finally about a man that could not admit he was wrong, the Shakespearian tragic flaw, although Hawks stops short at the Bard’s usual tragic hero fate. Wayne is superb as the pig headed Dunson, and the performance ranks with his best, effortless and authoritative, and overlooked in that the ‘method’ of Clift got all the notice. Wayne’s style is in it’s own way as natural as Clift’s, but Montgomery Clift almost single handedly brought the young western figure into modern, 20th century performance contextual terms, eschewing melodrama and artifice, his delivery and grace absolutely riveting.

Hawks would return to the western more and more as he got older, and like Ford it made up the majority of his output in his later years, but he would never present as romanticised and loving a version as he does here. The plains and the prairies are presented with a reverence and beauty that echoes Ford’s Monument Valley work, and Hawks ability to add to the myth of the west and the symbolic well-spring it represented to a post war America in need of it’s myths can’t be understated. Red River is a wonderful achievement at every level, a worthy final film in any last picture show. 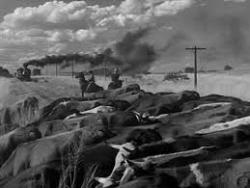 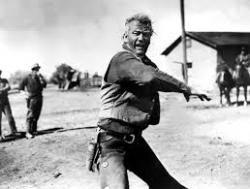 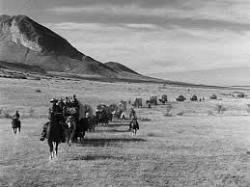 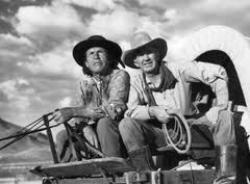 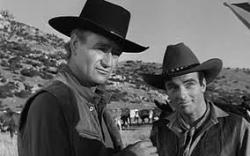