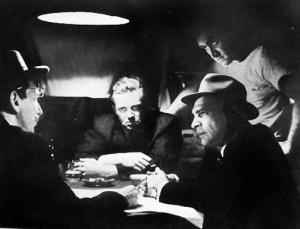 John Huston had arguably kick started Film Noir with his debut feature The Maltese Falcon in 1941, and here following a series of different genre pictures after the war, that included The Treasure of the Sierra Madre and Key Largo both again with Bogart, he returned to the dark crime/caper movie and succeeded spectacularly again. Huston had signed a two picture deal with MGM, not noted for it’s gritty crime films, and he was put to work on a Roman epic called Quo Vadis, but the mis-match was obvious to studio exec Dore Scary who bumped him from the project and gave him a work from one of Huston’s favourite writers that MGM fortuitously owned, W. R . Burnett’s The Asphalt Jungle. It was Burnett who had furnished Huston with the raw material for an early writing success with ‘High Sierra’, the film that established his link to Bogart, so Huston had cause to be doubly enthusiastic. Huston co-wrote the script with Ben Maddow and even got Burnett’s personal approval after consulting with him.

The shadow side of the ‘police procedural’ film, is the caper film, where the detail of the crime is laid out and the dimensions of the protagonists explored. Huston has one of his ‘respectable’ villains, the lawyer Emmerich (Louis Calhern) say ‘crime is only a left handed form of human endeavour’, putting the aspect that the group is merely engaged in a job of work. Doc (Sam Jaffe) is a master criminal just released from prison and interested in pulling off one last big heist. He enlists the help of Cobby (Marc Lawrence) , a small time bookie, to be the go-between for financing of the venture by crooked lawyer Emmerich. Doc finds the necessary accomplices in muscle guy Dix (Sterling Hayden), safecracker Louis (Anthony Caruso) and getaway driver Gus (James Whitmore), a motley crew of working class criminals, each in need of the money on offer for one reason or another. Louis has a sick young child to take care of, Dix dreams of escaping the claustrophobic city for the open paddocks of Kentucky and the horses he cared for in his youth, Doll (Jean Hagen) is inlove with Dix, and wants to find a way for them to have a life together, but Dix, seeing he can’t offer much in return, is reticent to commit.

Emmerich agrees to bankroll the heist, but insists he will take the responsibilities as ‘fence’ as well, meaning he’ll need to give Doc $500k in return for the hot jewels. Doc is suspicious of him, but let’s his concerns waver given Emmerich’s status. ‘Greed made me blind’ he says later. Emmerich is so cash strapped he convinces Cobby to stump up the $50k needed to pull off the heist and then plans a double cross with his hired thug Brannom (Brad Dexter) when the rocks are delivered. The heist itself is a long sequence that delights in the intricacy and efficiency of the technical requirements to pull off the robbery, something that would whet the appetite for later caper films like Dassin’s superb Riffifi. The robbery gets sprung unexpectedly and Louis takes a bullet to the gut in the getaway. Doc and Dix take the goods to Emmerich, and Brannom shoots Dix before being shot himself. Emmerich disposes of Brannom’s body, but a police crackdown finds it’s way to his door as Cobby squeals, undone by his relationship with a corrupt cop. Emmerich is revealed for the corrupt operator he is as the Police Commissioner delights in the arrest at his beach house. Emmerich has a touching scene with his much younger mistress Angela (Marilyn Monroe) before going to a private room and committing suicide. Doc takes a long cab ride out of town, escaping the dragnet, but stays too long at a diner en-route, distracted by his vice for young women. Dix and Doll drive for Kentucky as the blood drains from Dix until only a shell of him arrives to stumble into the paddocks and drop dead, the horses there casually grazing around his corpse.

Huston produced an essay on desperation, greed and duplicity, and had it shot in the finest noir fashion, the shadow play of the ‘asphalt jungle’ representing the caged limits of their claustrophobic universe. ‘We are all working for our vices’ says the knowing Doc at one stage, and mostly it’s the vices that lead to their individual downfalls. Doc pre-figures his own demise by lasciviously pawing through a girlie calender early in the film, his perversion costing him by watching a young girl dance at the diner when he could have been driving clear. Emmerich has a lifestyle to maintain, one of opulence and young women, but not the legal means to finance it, so he turns to the criminals he represents to help him ‘Some dirt is bound to rub off’ the Commissioner admits. Dix longs for a simpler life, back in a rural idyll, but the city has ground him down, he needs to wash the dirt off, ‘no fresh air here’ Gus advises.

Huston’s moody and taut framing points up the dark underbelly, but the narrative takes pains to flesh out the criminals in ways that makes clear these are ordinary men, who are engaged in a job, no more no less. Condemnatory judgment is difficult as the police also have corrupt elements, blurring the line between ‘right’ and ‘wrong. When the Commissioner makes Dix out to be a thuggish monster to the press, the description rings false to the man we know, one who lives a ’moral’ life in less than easy circumstances, standing up for his responsibilities and his friends as well as he can. The relative moralities of a noir vehicle like this threw up many interesting conundrums to a post war audience no longer certain about traditional values, a reminder that the generally accepted anemic view of Eisenhower’s antiseptic ’50’s has a shaded flip-side.

Sam Jaffe’s Doc is a brilliant performance of depth and restraint, intelligent and balanced, and garnered him many awards. Hayden’s physical presence is commanding, but it’s his ability to reveal Dix’s bruised heart that seperates this turn from a run of the mill criminal portrait. Hayden manages to convince us that Dix is a moral man, but caught in a world that pushes him to immoral choices, and his torment is the conflict he finds there, leaving him unable to express himself fully to Doll, who heartbreakingly is trying to comprehend her man.. Calhern was never better in his quiet rendering of the corrupt lawyer and Monroe found a star making vehicle as she lights up the screen with her naive and fragile Angela who can only trade on her exquisite beauty.

Huston proved himself a master of many cinematic forms, and with The Asphalt Jungle he reasserts his command of the shadow play of crime and greed and the dark heart of man. The best laid plans may indeed come unstuck and in the end we all pay for our vices, but to search for meaning in a shifting moral universe is the only path open to any of us, in this way Huston has produced a true existentialist canvas with which to appreciate the sombre world of film noir and it’s dark streets. 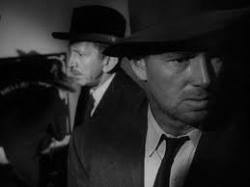 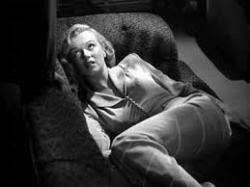 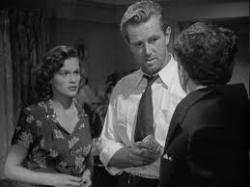 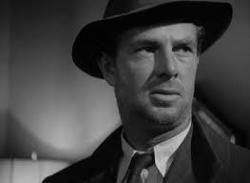 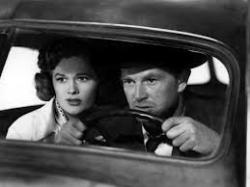