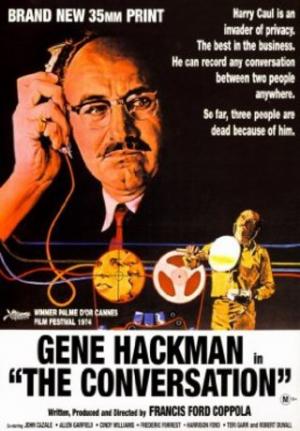 Francis Ford Coppola's choice of production sandwiched between his two '70's Godfather epics, 'The Conversation', is in many ways just as satisfying as either of those magnificent films, and speaks more directly to the Nixon era issues it inadvertently addressed. Coppola wrote the piece in the late '60's prior to Nixon's election, but ironically it came out just as Watergate was searing a Presidential scandal into the national consciousness. A cold war mentality had seen the surveillance industry flourish and new advancements in electronic miniaturisation meant that the ability to eavesdrop on private conversations skyrocketed, and Coppola's piece looks at the moral implications of listening without hearing.

Harry Caul (Gene Hackman) is something of a legend in the field of covert eavesdropping, but at the personal cost of leading a closed off and remote life from other people. Coppola opens with the difficult scenario of Harry doing a job of recording a conversation between a young man (Frederic Forrest) and woman (Cindy Williams) in busy Union Square in San Francisco. Harry rises to the technical difficulties by using remote 'shotgun' microphones as well as a bug on a pedestrian who passes the couple when possible. He merges the three source recordings, all with audio flaws at some points, but compiles them into one seamless master recording which eventually captures the entire conversation clearly. Harry takes the finished tape to his client, the Director (Robert Duvall) but when he's not there Harry won't give it to his surly assistant Martin (Harrison Ford) and vows to only deal with the Director.

Harry's professional detachment is soon challenged, as the tone in the recorded woman's voice alerts him to a sense that she's in danger of harm coming to her, maybe at the hands of his client, and soon Harry's sense of guilt over a past episode that led to the death's of 3 people is overwhelming him and he gets involved in the job at a deeper level. Contrasted to Harry's command of his professional world, where colleagues at a 'buggers' convention are plainly in awe of his ability, Harry's personal life is a shambles. He visits his girlfriend (Teri Garr) but she seems to know nothing about him, revealing a secretive and possibly paranoid area of Harry's thought processes and a reticence to respond to her questions about his life. Harry has a social experience with some of the convention attendee's, in the form of a party at his warehouse work location, including Moran (Allen Garfield) his jealous East Coast rival. Moran demonstrates how easy it is to furtively record someone when he secretly bugs a conversation Harry has with a woman at the party that is personal and revealing, and plays it back to the gathering much to Harry's embarrassment. The only time Harry has let his emotional guard down and he has been compromised and ridiculed, and this only adds to his isolation. He dreams of the young woman, and tells her of his life in ways he hasn't told anyone, trying to convince her he wants no harm to come to her. He visits a priest and confesses that his actions once led to harm to others and is scared they now will again. Harry attempts to run some kind of interference for the plan he has constructed in his own mind, only to find his suspicions were 360 degrees off the mark. Harry now has to face the fact that the organisation he was making false assumptions about is now 'watching' him 'we know you know, we'll be listening to you' Martin tells him. This statement has Harry's paranoia run rampant, and he proceeds to tear his apartment up to find the bug.

Harry has crossed a professional line and opened himself up to facing the consequences of his actions, but his emotional resolve is not sufficient to deal with the internal conflict, and Harry is left an empty shell of a man, clinging to his substitute comfort blanket. Harry's mantra of 'I don't care what they're talking about, I just want a fat recording' has left him ill-equipped to address the blowback, and his blocking off of real relationships has meant his only human connections are superficial, he listens but doesn't hear. His catholicism proves no solace (but may help explain his focus on guilt), his objections to mild blasphemy's are as surface-lite as every other aspect of his emotional life, and ultimately he has to reject even that as he symbolically takes apart a Virgin Mary icon looking for the bug in his room.

Coppola has commented that Hackman's normally affable and friendly demeanour  vanished after he got into Harry's emotionally stilted frame of mind, and filming was difficult as a result. Hackman for his part produces one of his best performances as Harry, from the awkward cheap raincoat to his visual expressiveness of the weight of the crushing moral conundrum wearing him down., it's a tour de force. Garfield is great as the obsequious Moran, and the minor roles are well filled, but it's Hackman's show. Walter Murch's sound design is a key component of the film's success, and what could easily have descended into audio chaos is crisp and sharp component that hooks the audience in beautifully. The comparison's to Antonioni's 1966 film 'Blow Up' are obvious, and this was the point of inspiration for Coppola, who took the germ of an idea and fleshed it out brilliantly in an era where the counter culture was questioning it's institutions in ways unthinkable only a generation earlier. The Watergate scandal made this piece incredibly relevant, and it's not often that art and reality so completely intersect, resulting in Coppola capturing the zeitgeist in ways he could not have dreamt of. Regardless of this the film is a compelling and thoughtful essay on the consequences of action without moral responsibility, the defense of 'I was just doing my job' was seen through in the Nuremberg War trials, and individual responsibility was invoked as a necessary component in any human contract. The fall out of those actions is not always easily dealt with however, particularly if you're a 'geek' social misfit and emotional midget like Harry Caul. Harry's attempts to reach out met with failure, the only option left was retreat to a 'compromised' home that he could no longer live in, his trust in his safety blown apart by his own insider knowledge. Harry pulling apart his own world, plank by plank, is a haunting and harrowing final image.

ps. If 'Blow Up' precedes this film, then Tony Scott's 'Enemy of the State' is it's 21st Century successor, even if it's overblown and  fairly ridiculous in comparison, it's pretty good fun, and Hackman virtually reprises his Harry Caul role in it, just so we all get the connection. Quelle surprise.