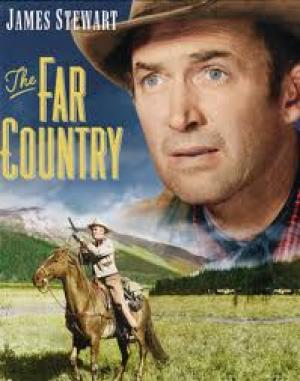 Mann on the far side

"I sort of got into Westerns... It was a sort of desperation move, really. I had several pictures that didn't go very well, and I just realised that I would have to try something else."
~ James Stewart

Anthony Mann and james Stewart made 8 films together, one of the most significant director-star pairings in all of American cinema. The penultimate western in the cycle, The Far Country,  sees Ruth Roman join the mix as the love interest and Walter Brennan as the toothless (literally) sidekick. Mann shot the spectacular vista's with ace cinematographer Billy Daniels in the wide open scenic mountains of Alberta in Canada from a script by Borden Chase, who wrote 3 of the 5 Mann-Stewart western vehicles, as well as Hawks' Red River.  Mann was taking something of a leaf out of John Ford's book by using a near 'stock' company of supporting actors and appearing again for him were western regulars John McIntire, Harry Morgan, Royal Dano, Steve Brodie, Chubby Morgan and Jay C. Flippen.

Jeff Webster (James Stewart) is a lone wolf, concerned only for himself and a grizzled old sidekick called Ben (Walter Brennan) as they make it through the wilderness to the last stop before Dawson, and the Klondike gold rush. They are driving cattle which they plan to sell and then pan for gold and make their fortune, and to retire to a small home in Utah, and put the small bell Jeff has on his saddle inside the front door, so it rings when friends arrive. The friends will no doubt be Ben's as we soon discover Jeff is not that warm and fuzzy, "You don't even like people"   he's told later, "Why should I ?"  he snaps back. Jeff trusts no-one but is attracted to the independent and fiery Ronda Castle (Ruth Roman) who runs the saloon, but who is equally distant, she tells him "I trusted a man, once"  and he replies he's wary of people for the same reason, he was in love and was burned. Jeff gets into trouble with the 'law' in Skagway, prior getting to Dawson, and the self appointed Judge, Jury and executioner Gannon (John McIntire) puts Jeff on notice that they will square up one day. Jeff and Ben make it to Dawson with their cattle and soon are digging for gold and avoiding the local problems as much as possible. Gannon and his thugs arrive to take over the town and getting out for Jeff and Ben with their rich haul proves problematic.

Mann continues to employ the vast emptiness and remoteness of his landscapes to indicate or contrast with the inner turmoil of his protagonists. Jeff is as empty and remote as the mountains and as ice cold as the glacier upon which he let's Ronda and her party split away from him and his cattle, sensing that an avalanche was a possibility. When the snows collapse and several of the party are killed he has no interest in going in and help clean up the mess, he's lost all empathy and humanity it seems. Ben tells Jeff he keeps searching further out on the edge, "Hankerin' for the far country",  and in truth there's no country far enough out there to help quiet his inner demons. The dream of 'home' in a place like Utah is a pipe dream, as Jeff's tragedy is to be perpetually set out on a destination for which he can never arrive and yet doesn't realise it. Jeff is distracted by Ronda in whom he sees something of a hard, kindred spirit, and she blinds him to the fact that his dream is right in front of him and his 'home' is as well. Mann brings these home poetically in the final frame with the close up of the bell on Jeff's saddle.

The mood of the film is a kind of loose version of reality, with the same heightened overtones of emotion that Mann evoked in Winchester '73  and The Furies,  not afraid to reach for a quasi-operatic or theatrical dimension to create his mood. Like Hitchcock he understood that he wasn't presenting reality, he was presenting a version of it that could be almost surreal at the edges. Mann used space in the same way Ford did, to create context for the human actions, to set them against magnificent surrounds to amplify and codify the narrative. Jeff's struggle against the wilderness without is mirrored with his struggle against the wilderness within, his search for a 'far country' is a search that can only end at himself, an existentialist dilemma in a western context.

Stewart again holds centre stage with his multi layered characterisation of Jeff, his emotional journey from remote and insular to the realisation he lives in a community is balanced and convincing. Brennan is in his element as the rock steady partner who helps him see reason, part guru and part pet dog, and a role he could phone in is if need be, apparently his only question to Howard Hawks when cast was "Teeth in or out?",  Mann opted for out. Ruth Roman is much better playing a bad girl that she was in good girl parts but the support honours goes to McIntires corrupt Judge, his scenes with Stewart a standout.

Anthony Mann and Stewart made one more western together, the excellent The Man From Laramie,  where the psychology of the 'hero' again was what made the underlying implications so fascinating. Mann could evince the same unease and sense of pervasive fatalism in black and white (The Furies', 'Winchester '73)  or in glowing technicolour as here, adept with his handling of the actors and the balancing of large scale settings. The Far Country  is another example of what looks like a standard western 'oater', same hat, same horse, but underneath lies a world of conflict and interest. 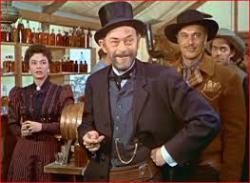 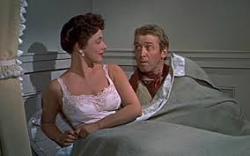 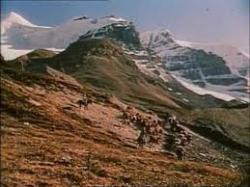