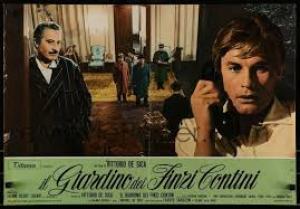 The Garden Of The Finzi-Continis

'I love humanity, I trust humanity, but humanity has a way of disillusioning me. The pictures I direct are nearly always melancholy. This comes from the contrast between my love and my disillusion. I am an optimist. I love life. I seek perfection. If my art seems pessimistic, it is a consequence of my continuing optimism and its disillusion.'
~ Vittorio De Sica

Vittorio De Sica provided a late career masterpiece with this examination of the banality of evil with The Garden of The Finzi-Continis, an adaptation of the 1962 novel of fascist persecution of Italian Jews by Giorgio Bassani. The film is set in the lead up to WWII and during the conflict and focusses on the town of Ferrara in the north of Italy as it accedes to Mussolini’s dictates about restrictions to be imposed upon Jews, seen through the eyes of an upper-class Jewish family and a middle-class one. The striking cinematography was provided by Ennio Guarnieri, a hitherto journeyman technician who had spent a decade in undistinguished films before Pasolini tapped him for Medea the year before, and Zeffirelli would put his skill to notable use in 1972 on Brother Sun, Sister Moon.

Micòl Finzi-Contini (Dominique Sanda) is a pretty and beguiling young woman, the centre of attention for her circle of friends and wealthy family. She lives a life of privilege in a walled off estate in Ferrara and multiple young men vie for her affection. Amongst her suitors is her intelligent childhood friend Giorgio (Lino Capolicchio), a middle-class Jew from the town. Micòl and her sickly brother Alberto (Helmut Berger) struggle to deal with the changing society as the ruling National Fascist Party institutes racial laws limiting various rights for Italian Jews. Micòl is lost in a fog of denial and misplaced desire and Giorgio, on a lower social rung, has to deal with the new reality where Micòl can stave off the harsh changes given her privilege and position.

In November 1938 Mussolini adopted racial laws that discriminated against Jews, theoretically at least making it illegal for ‘real’ Italians to marry or procreate with them. This was a purely cynical, political move to accommodate his German allies on the brink of war. Mussolini did not personally believe in the putrid, anti-Semitic persecution but by bending to Hitler’s poison he enabled a barely suppressed anti-Jewish strand in Italian life to emerge into plain sight. Many right-wing Catholics were soon giving up Jews to the Nazi occupiers when war came, just as happened in France. It may have been the Italian Fascist Party’s regular denunciation of Hitler’s mad racial purity theories that gave Italian Jews a false sense of security, but eventually the cattle cars arrived and the concentration camps were fed.

De Sica takes a deceptively poetic approach to the story in the visual sense, employing a romantic, dreamy palette where the Finzi-Contini’s inhabit a personal Eden while the darkness lurking below the surface festers and threatens. Micòl is the central figure for De Sica’s prism; a woman who sees the cossetted world into which she has been born start to disappear, incrementally at first and then in a confused rush. When we first encounter Micòl she is unconcerned with the wider world, her innocence seems charming, but eventually she is compromised both by outside elements and by elements within her. She is indifferent to the safest choice of a suitor, Giorgio, a boy liked and welcomed by her affluent and intellectual family and chases the bad boy, Giampiero (Fabio Testi), a rough and lowly communist. Giorgio is nonplussed by her rejection of his affection and this begins his awakening to the changes and the dangers extant, as the entire country seems to fall prey to a collective hardness. In this parable Micòl is Eve and the apple is the low, earthy, carnal knowledge that Giampiero tempts her with as she begins to become acquainted with her animal drives, another world entirely from the aesthetic, ethereal and hermetic universe that is her inheritance.

De Sica gave young French actress Dominique Sanda a plum role and she rewarded his faith in delivering a touching portrait of a conflicted character caught in a personal, existential crisis. She hits the perfect tone for De Sica to centre the haunting mood around, a languid and vague ennui meets creeping anxiety as the utopian existence of the quasi-aristocratic Finzi-Contini’s vanishes like a ripple in a pond. Lino Capolicchio is fine as the earnest, devoted Giorgio and the supporting cast is entirely effective (particularly Romolo Valli as Giorgio’s father), thanks to De Sica’s unerring eye for detail and verisimilitude. Helmut Berger is a stand-out as the frail brother, still curious to explore a world that increasingly views him as a liability to which they have constructed an entirely wicked final solution. De Sica ends the visually stunning film with a sequence that haunts, an Antonioni-esque procession of the abandoned garden of paradise, over which the score sounds out a Jewish lament for the dead. The effective and memorable score was provided by De Sica’s composer son, Manuel De Sica.

The film is entrancing on every level, and its strength lies in the fact it does not tackle anti-Semitism in a preachy and direct way, it instead shows the utter banality of evil, which is an even more powerful way of framing the lesson. There is both a personal family tragedy in play, the fact that the future of the family is not assured due to the illness of the male heir and the intransigence of Micòl, and the larger political/community tragedy of a nation selling out and betraying a section of their own population for poisonous ends. The film is a searing reminder of the perils of fascism and what even a casual empowering of bigotry can bring. Mussolini enabled a terrible reckoning, one that many Italians didn’t dream could happen, even though anti-Semitism was deeply entrenched in catholic Italy. It wasn’t Hitler who first ghettoised Jews, restricted the kind of work they could do or made them wear marks on their clothes to identify them as Jews, it was Papal Rome hundreds of years prior.

Vittorio De Sica was one of the giants of Italian cinema – a child actor from the very early days, and a successful adult actor before he started directing in 1940. If he’d made no other film than his ninth feature, The Bicycle Thieves, he’d be an immortal figure, but happily he made several other classics, including this one, his fourth last feature in 1970. He deservedly won the Best Foreign Film Academy Award for The Garden of The Finzi-Continis, his third win in the category. The film is a mature masterpiece and carries a punch that stays with you for some time. 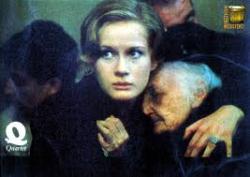