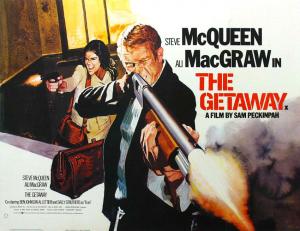 The Getaway was a project instigated by Steve McQueen’s co-founded First Artists company, he signed director Peter Bogdanovich but he dropped out to do What’s Up Doc?  instead, having cast Cybill Sheperd in the central role of Carol. McQueen then roped in Sam Peckinpah to direct, impressed as he was with him on their previous film Junior Bonner and they re-cast Ali McGraw as the love interest. McGraw was then one of the biggest box office stars in the world, thanks to the Saccharine Love Story made for then husband Robert Evans’ Paramount, and both he and McGraw were concerned about typecasting, so he encouraged her to take the role, much to his personal regret. Walter Hill fashioned the script from the Jim Thompson novel. Both Peckinpah and McQueen decided the film would be an ‘homage’ to Bogart and to High Sierra in particular, the muscular direction by Raoul Walsh on that film obviously appealing to both men, and Bogart by then a screen immortal and the epitome of cool, as was McQueen. The pulpy scenario was gloriously shot by veteran cinematographer Lucien Ballard, who cut his teeth with Josef Von Sternberg in the ’30’s, providing a nice link to that classic era. McQueen obtained final cut in the contract, and Peckinpah disowned elements of the final film once it was taken out of his control, his excessive drinking becoming problematic. One of the key elements hat McQueen changed was the score by Jerry Fielding that Peckinpah used, and he engaged Quincy Jones to do the job causing Peckinpah to take out a full page ad in the Hollywood press protesting as much.

Peckinpah shot the opening at an actual prison, with McQueen sharing the screen with inmates in yard scenes. The remarkable architectural structure is unexpectedly softened by the presence of a herd of deer, grazing gently outside the walls, as the herd of prisoners amble aimlessly inside. Doc McCoy (McQueen) attends a parole hearing, only to be denied, and his frustrations cause him to ask his wife Carol to strike a deal with the corrupt parole board member Benyon (Ben Johnson) to get him out. Doc is released and meets Benyon who outlines a bank job he wants Doc to pull for him as the price of his release. Benyon teams Doc up with two not so bright accomplices, Rudy (Al Lettieri) and Frank (Bo Hopkins),neither of whom impress Doc who wanted his own hand picked crew. Doc and Carol plan the job, and because of the unstable nature of the imposed crew complications arise. Sensing a double cross Doc thinks he disposes of Rudy and goes to Benyon to provide the payoff, even though Carol wants to take all the money for themselves. Doc goes to Benyon’s house to settle the deal, but Carol enters and shoots Benyon in revenge for making her have sex with him as part of Doc’s release price. Doc is shocked and beats Carol, not knowing how to react to the news of the liason but angry that Carol had kept it from him.

They resolve to head to El Paso and from there to Mexico as per the original plan, but Rudy has survived and is in pursuit. A misadventure at a train station sees the bag of money get stolen and leaves Doc to use all his wiles in getting it back. The separation from Carol that this entails leaves her lost and confused about a future with Doc, and Doc is equally conflicted. Rudy kidnaps a veterinarian and his wife (Sally Struthers) in the course of his pursuit, the wife taking to a life on the run with a gun-toting psychopath like a duck to water and providing some darkly comic moments. After the travails of the journey, where Doc and Carol manage to barely avoid disaster Doc declares ‘It doesn’t mean anything if we don’t make it together’, finally realising the depth of Carol’s sacrifice for him, and she warms towards him as well. Just as things are looking up Benyon’s brother and his henchman arrive at the pre-arranged hotel where Doc has just disposed of the inept Rudy and a massive shootout erupts. Doc and Carol manage to getaway and hijack a truck driven by an amiable cowboy (Slim Pickens) and once in Mexico they buy his broken down truck off him for $30k and disappear over the hill.

Coming in the middle of the American Renaissance period, but not quite fitting that genre, The Getaway more fully represents the neo-noir type that has appeared from time to time since the ’60’s. Peckinpah uses techniques of quick cutting, flashbacks, flash forward et al that are more typical of the film brat crowd, but manages to do it convincingly and with great authority. A sense of disorientation pervades the screen, as Doc tries to make sense of the shifting landscape, his own moral centre is his only compass, making him go through with a deal that he understands is probably bad all the way through. Carol is the dedicated partner that can only give her man a reason for continuing the struggle, herself drawn to the innate decency in a superficially ‘bad’ man. The corruption in the piece is centred in the businessman Benyon and the machinations around the bank job, which was done to cover the fact Benyon’s brother had already taken money that the robbery was to cover. For all of Doc’s criminality his code means he attempts to follow through with his agreements, while the duplicity of ‘respectable’ businessmen Benyon makes him an amateur by comparison. Doc is repulsed by what his wife did with Benyon at one level, but has to respect her dedication to him in the end that would allow her to humiliate herself for him in that way. Ultimately Doc addresses his macho prejudices and moves on. Slim Pickens has a small riff on morality at the end, and essentially acknowledges the couples commitment to each other in marriage, is the centre framework of making a future that can last, Doc by leaving violence behind, by dealing fro the last time with the good natured cowboy, agrees.

The Getaway is the perfect example of a ‘movie star’ film. It exists only as a vehicle for McQueen, and what a vehicle it is, showing us why stars like him are so watch-able. Peckinpah was angry that McQueen used his ‘final cut’ clause as producer to use more ‘flattering’ angles of himself, but the finished product does not appear out of balance, and McQueen simply dominates the screen with his charisma and tenacity. McGraw is no real match for him, her inexperience as an actor too obvious, but she’s adequate as his attractive wife. Lettieri is marvelous as the grimy Rudy, and Struthers brilliantly convincing as the good girl gone bad. Hugely entertaining and with all the trademark Peckinpah violence enervating it, it’s a high-octane thrill package that work at every level. Bogie might have blanched at the level of blood on screen, but he surely would have been proud of McQueen’s tribute to ‘Mad Dog’ Roy Earl. 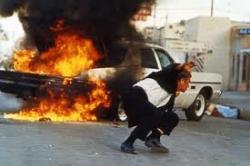