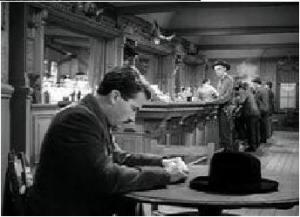 Henry King’s moody and masterful western pushed the boundaries of the cinematic west, leavening a large dose of reality into the central myth of the lone gunslinger, and was one of the early examples of a new kind of psychological approach to the genre’s storytelling. A staple of film production since day one in Hollywood the western had mostly been a vehicle for cheap and repetitive actioners, with easy lines of delineation between the good guys and the bad guys, with the lavish and extravagent spectacle blockbuster occasionally appearing. John Ford had done most to rehabilitate the genre and suggest it’s full possibilities of expression since the superb ‘Stagecoach’ in 1939 and other thoughtful westerns like Wellman’s almost noir-ish ‘The Ox-Bow Incident’ also pointed the way forward to a slightly more interesting destination. The central theme of ‘The Gunfighter’ is what happens to the outlaws fortunate enough to grow into middle age?

The sans fanfare 20th Century Fox opening indicates we’re in for a different type of film here, and the first sequence is direct and elegant, a lone rider on a dream-like plain against Alfred Newman’s beautiful scoring, setting up the gunslinger classic myth expectations. Those expectations are met with a brutal reality when the rider, Johnny Ringo (Gregory Peck) gets to town and walks into the saloon for a drink. The cliche of the hot headed kid picking a fight is handled deftly, Ringo avoiding the standard silent and dangerous approach but lecturing him like a disappointed Uncle, ‘Why don’t you button up your breeches sonny and go home’. Ringo has obviously had enough of this kind of trouble but inevitably has to prove he still has the speed on the draw his reputation demands, but it’s plain he’s now come to regret these killings, where once he may not have. Warned by the townsfolk that the kid had ‘three brothers who won’t care who drew first’ Ringo leaves town, ambushing the brothers who he knew would follow and disarming them. he sets off for Cayenne, knowing he’ll have several hours start.

After 12 years of ‘moving on’ Ringo’s had enough, he rides into town and parks himself at another saloon, the overly attentive barman Mac (Karl Malden) making a fuss over the notorious gunhand. Ringo is in town because it’s where his wife Peggy (Helen Westcott) and son live incognito, and a member of his old gang Mark Strett (Millard Mitchell) has gone straight and is in fact the Marshall. Mark greets his old friend but he let’s him know he can’t stay in town but agreeing to take a message to Peggy asking her to see Ringo before he leaves. Word spreads of the famous gunfighter’s presence and soon all the town’s children are dodging school to try to catch a glimpse, and the adults are not behaving much better. Mark has told him that it’s ‘his public’, his salutary assessment that ‘mostly they were wondering how you’ll die’. King builds the tension by cutting away to the 3 brothers slowly making their way towards town. Ringo dodges a shooting attempt from a disgruntled father convinced Ringo killed his son, in a town he had never been to as it turns out. Another punk kid, Hunt Bromley (Skip Homeier) wants to test Ringo, but after botching the attempt and being bluffed by Ringo he skulks away, overhearing how Ringo intends to leave town after he’s spoken to Peggy.

After initially refusing to meet Ringo, Peggy agrees and even let’s their son Jimmy meet him, but not letting on that Ringo is his father. Ringo tells Peggy he wants to get ‘a little ranch somewhere’, a place they can finally be a family, she replies ’it’s too late’ but leaves the door open for a meeting one year hence. Ringo has hope to continue but upon exiting he has to deal with the brothers. The law helps and the brothers are neutralised, Ringo is about to be on his way at the rear of the saloon, but Hunt calls him and catches him off-guard, shooting him unfairly. As he lies dying he asks Mark not to tell the truth of the fight, that people believe that Hunt was the faster draw, thereby condemning Hunt to the miserable existence he’s had to lead. At Ringo’s funeral, which is packed to bursting Peggy arrives and when asked who she is, she declares, "Mrs Johnny Ringo’.

The Gunfighter’ looks at the problem of an anachronistic figure like a gunslinger growing into maturity. It never deals in the stock currency of the main street face-off and shootout, notwithstanding that those situations almost never happened anyway and were very much a Hollywood construct, an approximation of the knights-of-old jousting contests. Ringo admits it’s ‘not really living’ and his notoriety precludes him from joining ‘civilised’ society no matter how reformed a character he’s become, he has a reputation he can’t live down, he can only live with it until it inevitably kills him. He’s also an early victim or example of celebrity culture as he is ultimately reduced to a commodity, Mac knowing that his saloon’s business will benefit as it will be seen as a ‘shrine’ to the famous gunslinger.

Peck is superb as Ringo, his inner dignity producing a sympathetic portrait of a person, however flawed and callow as a young man has grown to see the full spectrum of what he’s lost. 'The Gunfighter' is a beautifully self contained, taut and tight, psychologicol western, pointing at the internal struggles that every man has to content with, even in an overwhelming external environment. The primacy of a 'future' is represented by the son, both the reason for Ringo's survival and the existentialist meaning he longs for, consciously or not. King’s muted tones and crisp direction elevate the production to a level rarely achieved before in the Western form, and despite the many imitators that followed 'The Gunfighter' remains a convincing and impressive slice of Americana. 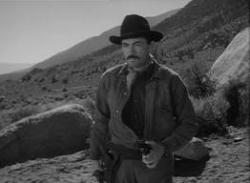 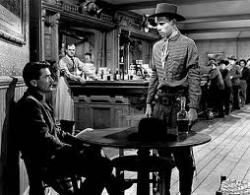 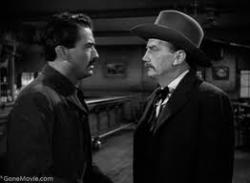 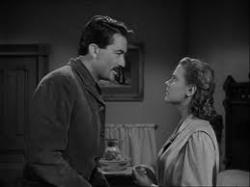 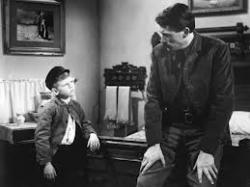