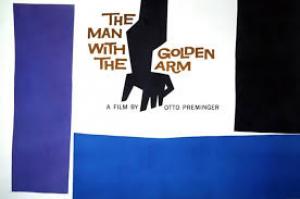 The Man With The Golden Arm

"When I finish a film, I want to forget it. I never like to repeat myself. Maybe, when I am dead, they will find certain consistencies in the style of my films, but I never want one film to look like another." ~ Otto Preminger

Otto Preminger was nothing if not curious, sourcing subject matter that many directors would automatically shy away from, like the titular and controversial 1949 novel here. He was also a master at casting the right actor for the right part but finding an actor to play a junkie in a mainstream Hollywood film in the 1950’s was like solving cold fusion. The solution came in the unlikely form of Frank Sinatra, who jumped at the chance (beating out Marlon Brando), and delivered a raw-boned performance for the ages as the heroin addicted Frankie Machine. The famously difficult Preminger got on very well with the scrawny actor and the collaboration produced a film that remains a career high point for both men. Kim Novak took the opportunity to cement the gains of Picnic, her first starring picture from the same year, making a statement that she could hold her own amongst a top-flight ensemble cast that included Eleanor Parker and Darren McGavin.

Frankie Machine (Frank Sinatra) is an ex-military veteran who has just recovered from narcotic addiction in an institution and returned to his old suburb in Chicago. Frankie has learned to play drums while incarcerated and wants to change his fortunes, but his wheelchair bound wife Zosh (Eleanor Parker) wants to keep him housebound as her permanent carer. Frankie has limited options and soon falls back into his old routine, dealing cards for shady underworld types and seeking out heroin from his old dealer Louie (Darren McGavin). The only ally Frankie has is Molly (Kim Novak), an old girlfriend, who encourages him to dry out and face the consequences once things take a turn for the worse.

Preminger initially engaged with Nelson Algren (the novel’s author) in his first attempt to graft a screenplay, but Algren’s unfamiliarity with the art of film writing and Preminger’s prickly temperament proved to be not a good mix and Walter Newman was brought in. Newman had previously written Ace In The Hole for Billy Wilder and was well suited to inject the grit and toughness needed to illuminate the shady characters and seedy subject matter. Preminger, who had a great depth of theatrical experience, framed the piece like an elaborate theatre production, and the device served to heighten the drama as it created a kind of claustrophobia to add to the potent cocktail of drugs and tragedy.

Much of the authentic atmosphere of the production turned on the music, scored by Elmer Bernstein, then at the beginning of a stellar career as a composer and arranger. Bernstein brilliantly distilled the tense screenplay into a blast of urban blues/jazz that leans heavily on its percussiveness, and at the heart of that choice is the contribution from Sinatra as the ambitious drummer. A west coast session jazz drummer, Shelly Manne, coached Sinatra on drums and Sinatra’s natural musicality shines through, particularly in the scenes where he’s delivering dialogue in conversation while keeping perfect time with his rhythm practice, no small feat even for a seasoned drummer. The score is pulsing and urgent and perfectly complements Preminger’s vision, and is the quintessential noir score, as good as Bernstein’s The Sweet Smell of Success just a couple of years later. Preminger was the first A-list director Bernstein worked with and he never looked back, becoming one of the all-time great composers across a career that spanned four decades.

The film finally, as it must, turns upon one central thing, Sinatra’s assured performance as the tortured junkie. Sinatra is a performer back at the top of his game and he grabs the meaty role like it’s a life preserver thrown to a drowning man. Frank Sinatra’s confidence was buoyed by the fact that he had enjoyed a career resurgence 2 years prior with his Academy Award winning role as Maggio in Fred Zinneman’s From Here to Eternity and he seemed determined not to fall back into the bleak few years prior, where good roles and even good recording opportunities dried up. That comparatively fallow period was the result on Sinatra being shamefully grey-listed by producers after his support for The Hollywood Ten and his long held practice of fighting racism and intolerance through mostly leftist organisations. Sinatra had an impressive track record in supporting humanist causes, and until a late in life turn to the right, he was a staunch Democrat.

The undeniably brave choice from Sinatra, choosing to front such a controversial film when his own career resurgence was far from assured, indicated a man driven by artistic rather than commercial choices, a philosophy that obviously resonated with Preminger. The film garnered Sinatra deserved Oscar and BAFTA nominations for Best Actor, and remains a key reminder of his abilities as an actor, The Man With the Golden Arm is one of his best efforts in a period that was full of fine performances in Suddenly, Not As a Stranger, Guys and Dolls and High Society.

Preminger had started to break the influence of the Production Code with The Moon is Blue in 1953 and he continued to push the envelope with this film. He went on to more controversy in 1959 with the brilliant Anatomy of a Murder, with the equally against type casting of Jimmy Stewart. Preminger was an erudite and intelligent director, adept in utilising the accomplished technicians Hollywood had to offer, and here it is cinematographer Sam Leavitt, composer Elmer Bernstein and Saul Bass on titles, to add to his ability to handle actors in the fine ensemble cast, and more often than not the results were exceptional. The Man With The Golden Arm remains an artistic triumph for all of the major players. 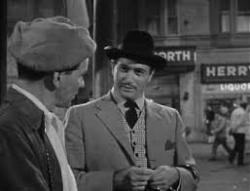