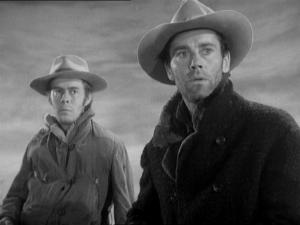 "Get a director and a writer and leave them alone. That's how the best pictures get made"  ~  William A Wellman

A masterful dissertation on herd mentality from one of Hollywood’s true originals, the maverick Bill Wellman. A star ice hockey player in his youth who’s athleticism had impressed Doug Fairbanks Snr, he found himself in Hollywood after WW1, took up the invite and Fairbanks got him started in the industry. In the interim he’d been a flyer in the Escadrille LaFayette, the experience helping him eventually land the job directing the picture that won the first Best Picture Oscar, Wings. Ox-Bow Incident was pitched to Wellman years before it was made by an independent producer, but Bill rejected it. After years of looking at below average material Wellman remembered the property and bought the rights himself, as a last resort he was surprisingly able to make a deal for it at Fox, having punched Fox boss Zanuck in the face some years before and vowed never to return. Daryl Zanuck evidently forgave him and thought it would be a worthy ‘prestige’ picture but would not make money, so he kept the budget as low as possible, forcing Wellman to shoot almost all of it on sound stages, accidentally benefiting the film by contributing to the look and claustrophobic feel.

Wellman also had to use Fox contract players, luckily for him he had the perfect actor to give the film it’s decent centre in Henry Fonda. Fonda was 3 years into a 7 year contract at Fox, the price he paid to get the Tom Joad role in Ford’s masterful The Grapes Of Wrath even though he knew it would mean being made to do studio filler material, or ‘dogs’ as he called them, so he embraced and fought for Ox-Box. Fonda has also told of how his liberal father took him to see a lynching of a black man in his hometown in Omaha, Nebraska when he was a young teen, to show him maybe the depths men can sink to and it obviously left a huge impression on him. Lamar Trotti, a Fox exec and a John Ford collaborator, having written Drums Along The Mohawk  and Young Mr Lincoln  et al, (both star vehicles for Fonda) wrote the screenplay.

The film opens conventionally enough, two cow hands ride into town to the strains of Red River Valley, and Art (Harry Morgan) and Gil (Henry Fonda)head Straight for the saloon. After Gil observes the usual rituals, drinking and fighting and lamenting his girl having run off, news arrives of the murder of Kincaid, a local rancher and the theft of his cattle. Some hotheads call for a posse to go and dispense some quick justice, but the shopkeeper Mr Davies (Harry Davenport) calms the mood and the men decide to consult the local Judge (Matt Briggs) as the sheriff is out of town. The Judge equivocates upon technical matters of the law, jurisdiction etc, and this further frustrates the mob when a retired Major Tetley (Frank Conroy) rides in to whip them up again. Tetley has dragged in his sensitive son Gerald to ride along and hopes this will ‘make a man of him’. The mob are duly roused and despite voices being raised against it, they head off after the rustlers. Gil and Art reluctantly go along, fearing they’d be under suspicion otherwise as near strangers in town.

A vignette encounter where the posse runs into a stagecoach with Gil’s girl returning on it married to another man, is the only relief in a thundering run after the villains. There are some lovely artful shots when the interior settings allow some moody lighting and expressionistic composition and when the 3 rustlers are caught the action stays in the same downbeat setting. The 3 men are tied up and interrogated, Donald (Dana Andrews) is an everyman type, married with two children, Juan (Anthony Quinn) is a Mexican cowboy and the old-timer Halva (Francis Ford – brother of John) is virtually senile. They protest their innocence in various ways, Donald is incredulous, Juan is taciturn and Halva confused. The evidence against them is circumstantial at best, but the mob wants vengeance. Davies again calls for a fair trial but is yelled down. Donald breaks down when it becomes clear they are to be lynched and asks to write a letter to his wife. Wellman contrasts the idea of the feminine in this situation with the perceived machismo of the action. Curiously Gerald is derided as a ‘female boy’ by his martinet father, and he gives Donald and Juan some tender looks which have obvious homosexual overtones. Gerald will however make his stand against the hanging, when the only woman in the group Mrs Greer (Jane Darwell) is possibly the most bloodthirsty of them all.

The Major decides they will hang at dawn, and in the meantime the cowboys cook a last meal and generally loosen up around the campfire. Juan attempts a break for it, and is shot and wounded, speaking for the first time in English, as it turns out he is cultured, educated and literate. The Major attempts to incriminate everyone in act but Davies calls for support and in all 7 people are against the hanging, including Gerald, Gil and Art. A black preacher Sparks (Leigh Whipper) has come to make sure the right words are read over the dead, his singing of negro spirituals lending a melancholy tone to already heavy proceedings. Wellman seems to be concluding the civilising influences such as the law and religion are impotent when faced with mob passion. The fact that Europe was under the fascist jackboot at the time of production can’t have been far from the writer’s minds as the entire film is a siren call and warning what comes from the mob bending to the influence of single minded authoritarian hell bent on bending the law to his will. Each time the lawfulness of the action is questioned, the speaker is ridiculed as ‘womanly’, or weak.

Dawn breaks and the men are hanged, Juan disgusted Donald won’t die like a man, and the Major equally disgusted his son Gerald won’t carry out his order and whip the horse out from under one of the condemned. Donald, by dying ‘badly’ exposes the cruelty of men following leaders blindly, even against what they instinctively know to be right. This is mob mentality equating with Nazism, the victims being hanged not gassed. Wellman never makes Fonda’s character a ‘white’ hat, his position shifts subtley and there is no 12 Angry Men solo against the rest here. Sometimes moral choices are hard, but that doesn’t mean they can’t be made even against the odds. The posse rides back to town and encounters the sheriff and a couple of men on the way, only to be told Kincaid was never killed and the real rustlers were caught. The Major and his son go home, the Major taking the cowards way out while the men go back to the saloon and while the enormity of what they have done seeps in Gil reads Donald's letter to a hushed room. Gil and Art ride off.

Why Wellman was not championed by the Auteurist French Nouvelle Vague,  who lionised Howard Hawks, I’m not sure? Wellman proved adept at making great films in different genres and even expanding on what was possible in some, as he did here with this film. The Ox-Bow Incident could justly be seen as the first significant ‘internal’ western, where questions of what is going on in the psychology of the characters is as important as anything else. As a condemnation of shallow mob bigotry, and of misuse of power and influence by authority figures, it is a timeless and powerful lesson.

nb.The day after the shoot wrapped Fonda enlisted in the navy to do his bit in WW2.

* Vale Harry Morgan, who passed away in December 2015 at the ripe old age of 96, a reliable and sturdy character actor over many decades. Thanks especially for the dignity and lightness of touch you brought to this gem. 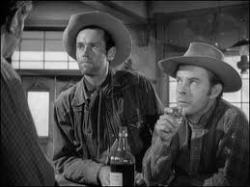 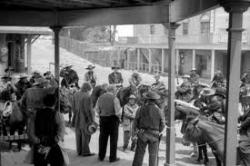 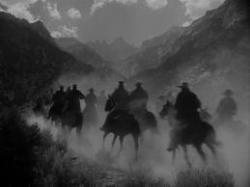 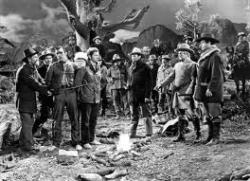 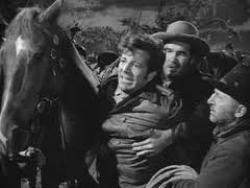 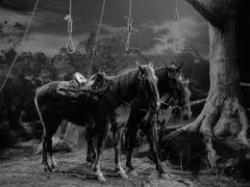 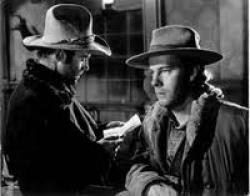