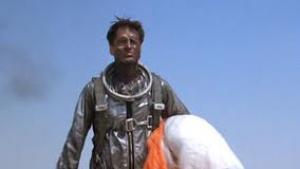 Philip Kaufman’s faithful adaptation of The Right Stuff, Tom Wolfe’s sprawling examination of America’s lurch towards space, resulted in a sharp and subtle satire of the cold war era phobias that lurked deep in the national psyche. Kaufman came to the film late in the piece and immediately butted heads with his writer, ace Hollywood screenwriter William Goldman. Goldman was on a hot streak having racked up All the Presidents Men, Marathon Man and Butch Cassidy and the Sundance Kid et al before The Right Stuff became the first film he walked away from as an A-list ranked talent. Goldman was assigned the job before a director was attached, and decided the only way to adapt the novel in more simplistic, heroic terms was to delete the sections regarding Chuck Yeager and the test pilots. Kaufman immediately sensed the whole story turned on Yeager’s presence; Goldman disagreed and walked off, forcing Kaufman to set about writing his own screenplay.

Chuck Yeager is a hot dog pilot, testing new planes for the military in the high Californian desert at Mojave. The engineers and scientists are keen to break the sound barrier, Mach 1, but no one knows what will happen once a plane reaches that speed, “There was a demon who lived in the air at Mach 1” it was said. Yeager lives fast and plays hard, and the night before he’s due to have a crack at the barrier, he breaks a couple of ribs after falling off a horse while racing his wife across the desert. A complicit friend helps him rig up a makeshift way of closing his planes hatch, and he duly carves himself in the record books as the man who broke the sound barrier. Soon Edwards Air Force base attracts all the hot young wannabe’s keen to break Yeager’s mark. The Cold War soon has America looking to ‘win’ the space race against Russia, and before long it’s decided the first astronauts will be picked from the ranks of the best test pilots. The selected seven pilots become instant celebrities, as America becomes entranced by their story.

Goldman wanted to say something positive about America in the wake of the Iran hostage affair, and (agreeing with his producer’s assessment) felt the books narrative was too broad with the test pilot subtext to be contained in a screenplay. He preferred to focus solely on the Mercury program and its seven heroes, consigning Yeager and the boys at Edwards to the cutting room floor. Kaufman sensed the nub of the matter revolved around the spirit of the test pilots, and after Tom Wolfe turned down the offer to adapt his own novel, Kaufman wrote his screenplay in 8 weeks. Chuck Yeager served as an advisor on the film, and even made an appearance as a bartender at Pancho’s, the funky desert saloon where the test pilots let off steam.

Kaufman’s film turns on the tension that exists between the hard and dangerous work of the test pilots at Edwards and the soft, celebrity phase of the initial Mercury program. The shadow of Yeager, perfectly embodied in the moody and quiet performance of Sam Shepard, looms large over the behaviour and ambitions of the Mercury seven, and it’s that implied benchmark of courage that elevates the story arc into quasi-mythic regions. The Mercury astronauts realise the gap between the public relations tornado and their minimal role in the actual space flights. The astronauts soon start to fight for their dignity, the thought of a monkey doing their job in a fully automated launch too much to bear, forcing the scientists to take their suggestions seriously and to modify the capsules to enable manual flight. The group turns their notoriety and fame into influence within the program, “no bucks, no Buck Rogers”, in an attempt to become more that “spam in the can”.

Kaufman frames the space race as a semi-comical response to the threat of Soviet domination of the cosmos, a buffoonish Lyndon Johnson declaring “I for one don’t intend to go to sleep by the light of a communist moon”. The resulting chaos in attempting to stitch together a quick and effective American space program sees the cheap option taken, a ‘mortar lob’ into the region that is universally acknowledged as the border of where ‘space’ begins, 50 miles above Earth. The initial testing phase of the rockets is disastrous, several of them exploding on take off, prompting Yeager to cede some respect to the astronauts, “It takes a special kind of man to volunteer for a suicide mission”.

Kaufman uses some lovely visual motifs, Royal Dano as ‘death’, the mad, collective scramble of the media pack, the mystical outback sequence where the ancient Australian aboriginal culture interacts with the space age, all eloquently contributing to a coherent whole. The aesthetic ugliness of the space craft, a snub and blunt capsule is counter pointed by the elegance of the plane used for the final test pilot sequence, where Yeager points his aircraft directly at the heavens and gets beyond the artificial boundary of space for himself, before he loses control. Cooper takes a second to stop the PR bullshit at a BBQ organised by Lyndon Johnson and starts to talk to the press about someone else as the ‘best pilot ever seen’, “There was one pilot I once saw who truly did have the right…”, only to trail off and give the press the stock answer he always uses, “You’re looking at him”.

Tom Wolfe constructed a sweeping narrative to contain the full dimension of the story, presenting Yeager as a modern knight doing battle with the dragon in the sky. Wolfe sensed that a culture needed its heroes, and it’s not the courage of those heroes he questions (as he is plainly in awe of that), it’s the surrounding circus that developed in the marketing of those heroes. Wolfe unlocks the irony in Yeager and Co doing remarkable feats, unheralded and on a low wage, to the massive PR push on every aspect of the celebrity life of the astronauts. It’s this irony, not something most Americans embrace easily, that underpins the satire at the heart of the piece, and something that Kaufman understands and plays to. Coopers line about Yeager sums up the entire proceedings in one sentence, that the seemingly default option of bread and circuses usually trumps the subtleties of quiet achievement.

The ensemble cast is beautifully balanced, with Ed Harris a stand-out as the goody two shoes John Glenn, and Dennis Quaid a scene stealer as the hedonistic narcissist Gordon Cooper. Sam Shepard delivers a note perfect characterisation of Yeager, and his rapport with the lovely Barbara Hershey, who plays Glennis Yeager, is understated and touching, and Shepard garnered an Academy Award nomination for his work. Kaufman keeps the action and dramatic balance complimentary and infuses the film with a fine comedic sensibility, amply filling its 3 hour running time.

The Right Stuff affirms that humans are best when we rise above the pettiness of the everyday squabbles that drag on us and ‘push the envelope’, and if “We are all of us in the gutter, but some of us are looking at the stars”, then the film is a glorious exhortation for us to continue to reach for those stars. Wolfe delivered a wonderful insight into the courage and valour of those who make those incremental and hard won steps, and links that idea to the quiet dignity that lives in the heart of the best of us. The Right Stuff is epic entertainment and a thoughtful and stylish cinematic masterpiece. 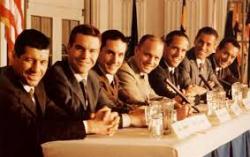 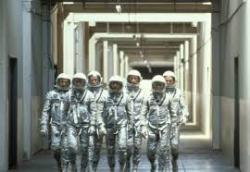