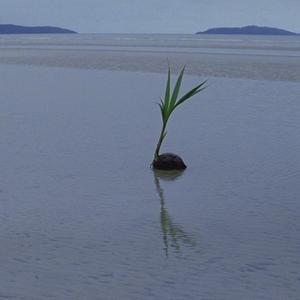 Terrence Malick returned to filmmaking in the late '90's after a gap of nearly 20 years, but such was his reputation that many of Hollywood's A list actor's immediately lined up to work with him. Once word was out he was making a film of the James Jones World War II novel set in the Pacific he had his pick of the most popular and talented actors of the day, many making scheduling allowances that were extreme in some cases, only to end up as cutting room floor fodder. Jones was famously dismissive of most Hollywood war films, decrying their non realistic approach to the situations of combat, and as such The Thin Red Line  was his attempt to tip the balance towards reality rather than overworked cliché. Malick uses the novel as his jumping off point for examining the meaning of life no less, and employed an elliptical approach that reached it's apotheosis in his 2011 release Tree of Life.

"What's this war at the heart of nature"?  is a phrase that Private Witt (Jim Caviezel) kicks off the film with, amongst beautiful footage of a Pacific island paradise. Witt is AWOL, and is soon picked up by the hard edged Sgt.Welsh (Sean Penn) who arranges for Witt to be seconded as a stretcher bearer rather than face court martial. The conflict between Witt's 'philosopher' soldier and Welsh's 'by-the-numbers' military approach is the central motif by which Malick examines this 'duality' within man. "Ain't no world but this one",  is Welsh's terse reply to Witt declaiming "I seen another world"  after his Melanesian reverie with giggling and happy natives amidst the natural wonders of the waters and the bountiful land is interrupted. The war has caused Witt to face the issue of his own mortality, and it's thrown up memories of his mother's death as he seeks to reconcile his part in the continuum of man, and what therefore his life, and the life of his soldier brothers, their 'spark of life' is worth? Witt questions it, "are we all faces of the one man, one big self"?  Welsh does not.

Brig. Gen. Quintard (John Travolta) briefs  Lt. Col. Tall (Nick Nolte) about a coming assault on a Japanese held island, and the petty and venal nature of military politics is ironically counter-pointed against the vastness of the setting. Quintard talks of the 'bigger picture', Malick makes it plain that people like this will never see the 'bigger picture' even when it's staring them in the face. Malick consistently contrasts the awesome and indifferent natural world against the travails and endevours of men, a visual trope he returns to again and again in his work. War heightens the senses and in this regard he dwells on moments with sequences like the long shots of flowing grass, kissed by a passing caress of sunlight, only to have the setting explode in an orgy of ordnance and firepower. In examination of the 'sin of killing' we see a baby bird struggling to be born, or a leaf closing up at a soldier's touch, poetry amid chaos. Malick holds his nerve with his elliptical style and long continuous moving shots and builds tremendous tension in his assault set pieces, focusing on the different types of terror the men on the ground experience as they make their way onto the island and into the foothills to attack the entrenched Japanese positions.

The only female presence of any note is that of Australian actress Miranda Otto who plays the wife of Private Bell (Ben Chaplin). Bell vividly remembers the tender and intimate moments they shared as he makes his way through the campaign, a lovely mental retreat the only solace in a grim and unrelenting procession of violence and death. The collateral damage of the suffering of a different kind at the home front is brought home by Bell receiving a letter from her asking for a divorce, her loneliness had led her to look elsewhere and she's fallen in love with someone else. In the purely masculine world on the front line Witt is involved in being a stretcher bearer for the wounded, he comforts men in pain, softly telling Sgt. Keck (Woody Harrelson) who's bleeding to death from an accidental self-inflicted  wound, "it's okay, even if you die".  Witt returns to combat duty, and ironically sees the villagers that were so peaceful prior to the assault now turn on each bother in acrimony, war it seems poisons everything. Welsh comes across Witt once more, "you still believe in the beautiful light"?  he asks, reflecting the death and carnage they've both been privy to and part of, "where's your spark now"?

The 'thin red line' is a reference to a colonial era militaristic glorification of soldiery, specifically the red uniform of the British infantry, a red line against barbaric heathens on the edge of Empire, or defending God, King and country while representing the traditional imperialist values that built the empire. Jones' thin red line has no such romantic allusions, it's more aligned to a thin red line of blood spilled in the pursuit of wars to preserve of defend the status quo, or vested interests. Malick takes it as analogous to blood and asks 'how many lives is it worth'? Witt sees a connecting thread to all living things, the 'spark' that exists in nature binds him to it, he is from nature and of nature, and ultimately is content to return to nature, even if it means sacrificing himself for the greater good.

The performances are uniformly fine, Penn suitably intense as Welsh, and Caviezel brings a level of Zen calm questioning that befits his 'seeker' character. Nolte is excellent as the duplicitous, insecure professional soldier and the rest are mostly at the level of cameo but all do well, including John Cusack, George Clooney and John Travolta. many actors filmed parts that never saw the light of day, including Martin Sheen, Billy Bob Thornton, Bill Pullman, Gary Oldman and Viggo Mortenson. Adrien Brody was so offended that most of his performance was left out he told The Independent', "I was so focused and professional, I gave everything to it, and then to not receive everything? in terms of witnessing my own work. It was extremely unpleasant because I'd already begun the press for a film that I wasn't really in. Terry obviously changed the entire concept of the film. I had never experienced anything like that... You know the expression 'Don't believe the hype'? Well, you shouldn't". The film was mostly filmed in North Eastern Australia in a beautiful rain forest part of the world called the Daintree, and it looks stunning.

As a philosophy graduate Malick was well placed to explore the dimensions of war that relate to the 'bigger picture' in a way a typical modern war film might not. Malick's personal beliefs supposedly lean towards an Episcopalian creed, or a Protestant variant on Catholicism, difficult to be sure as he is notoriously reticent to speak publicly, but his work is also able to be interpreted via an existentialist prism, so depending on your viewpoint there's much to find in his meandering and contemplative style. Malick moved progressively away from framing his sermons with narrative or 'outside' impetus, so whereas his debut Badlands  was a lovers on the run genre film that didn't overly emphasize the structural story elements, at least they existed, but from there story matters less and less in his succeeding films until he gets to Tree of Life  where the story is essentially non existent and the meditations on life are the only governing mechanism. It makes Malick hard work for some, but incredibly interesting and fulfilling for others. The Thin Red Line  is not your average war film, coming out 6 months after Spielberg's Saving Private Ryan  blockbuster it highlighted the vast difference in approach from a mainstream director who embraced the system on the one hand, happy to play by conventions and to market and promote accordingly and a maverick outsider who makes his own set of rules on the other, who refuses to market and promote his own work. The fact that they emerged from essentially the same set of conditions that gave rise to the American new wave or Renaissance of film in the '70's is remarkable. 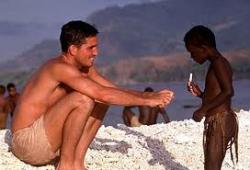 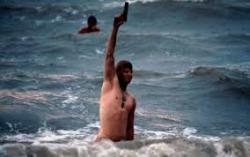 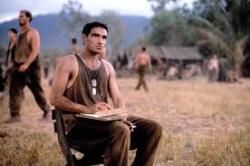