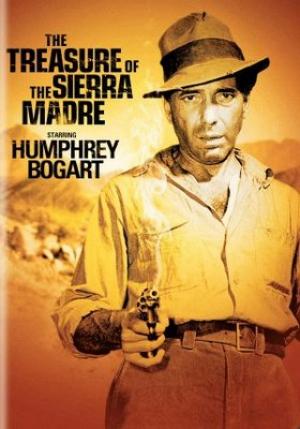 The Treasure of the Sierra Madre

In one of the most enduring yet uneven careers in all of Hollywood history, this essay on greed and it’s effects may well stand at the very top of John Huston’s achievements. Huston was a fan of the B Travern novel and planned to film it as the follow up to his directorial debut ‘The Maltese Falcon’. As it happened it was delayed while Warners argued the rights, and so he worked with Bogie again in Across The Pacific before WW2 then got in the way. After a well documented stint in the armed forces ‘Treasure Of The Sierra Madre’ would finally be his comeback vehicle. Travern had a lengthy correspondance with Huston and proved to be a well informed movie afficianado. At his insistence Huston travelled to Mexico and met with the enigmatic Hal Croves, supposedly Traverns representative but probably Travern himself, and this convinced Huston to shoot on location, a rarity for Hollywood films of the time.

The story is set in the time after World War One and prior to the depression, when Mexico was being exploited by American capitalists. Travern was an avowed leftist and the work is a thinly disguised allegory of the pitfalls of capitalism and it’s attendant greed. The novel must be read through the lens of the workers revolutionary movements of the era, when the Soviet was more an ideal and less a corrupt manifestation of abuse of power. Travern himself seems to have fled a failed communist uprising in Bavaria in the ’20’s, which may account for his reluctance to be identified. The novel has the central character Dobbs (Bogart) down on his luck, but decent enough to take honest work when it can be found. The US company he and new found friend Curtain (Tim Holt) work for stiffs them of their pay and entitlements and the only way they can take what’s theirs is with force, their own personal revolution. They then get a chance via the wiley old miner Howard (Walter Huston) to join in prospecting for gold, controlling their own means of production and toiling for the common good. A clue of what lies ahead is a siren like warning sounded by the old coot about gold… ’I’ve seen what it does to men’s souls’.

From this tempting set up Huston weaves his magic, albeit he tinkered with the novel to the extent of making Curtain softer edged as a foil to the later nastiness of Dobbs. Huston had no trouble securing Bogart, who was now one of the biggest stars in Hollywood but Warners baulked at Walter Huston as Howard, worried he wasn’t old enough. John, who got his father to take out his false teeth to play the role, got his way, although Walter won an Academy Award for the part and so well may have had the last laugh (accompanied by a manic jig!). Bogart makes the role of Fred C Dobbs his own. It was a very bold move for a star of his calibre to play such an unlikeable man. Bogie to his credit does not shy away from the unredeemable dimensions of Dobbs’ character, knowing it would probably make it an unpopular role at the box office. Jack Warner did want to see his main star in such a role, but as part of a new and significantly enhanced contract Bogart used his clout to have that part particularly set aside for him, sensing it was a prestige role. At this point he’d done his apprenticeship as a 2nd rung gangster or an A grade villain for over 10 years. Those roles had types that were all out bad (Petrified Forest, Roaring Twenties), or his hero turns as a tough guy/romantic lead (Casablanca, To have and Have Not) where he was mostly good, but nothing multi dimensional. This was a role that would stretch him as an actor, bearing in mind this was pre-Brando, and stars were expected broadly to conform to their personas.

After the earthy scenes in the Mexican town, fortune smiles on Dobbs and Curtain and they make their stake to join Howard and head for the mountains. An encounter with bandits, led by Gold Hat (Alphonse Bedoya) who attempt to rob their train has the prospectors as unlikely gunfighters,and they manage to get out of the scrap unscathed but alert to the dangers of the countryside. Howard belies his age and leads the way through demanding terrain, to the point where the younger men rapidly reach the end of their tether. It is off course at that point, that Howard reveals his prospecting instincts were right and that they are standing on ground ripe for extracting their fortune. Cue delightful old coot manic jig.

The men settle into the work, bending their backs for the common good. If this is Traverns communistic ideal, it is short lived. The gold dust starts to weigh heavy, both figuratively and literally. The easy comraderie of before comes under strain and under Dobbs growing paranoia the decision is reached for the dust to be split 3 ways each night, enabling them to keep seperate and secret stashes. Howard has seen it all before, but the changes in Dobbs become near demonic. Incidents with an unexpected American trying to muscle in, and another shootout with Gold Hat (‘Badges? I don’t have to show you no stinkin’ badges’!) make it clear that Dobbs will stop at nothing to get his gold off the mountains to finance his fantasy life on easy street. The partners finally agree on the amount of gold that constitues ‘enough’ and repair the environmental wound of the mining, at Howards insistence, and head home. Dobbs sees threats everywhere now, and with Howard being called upon to spend some time at a local village tending to a young boy’s illness, Curtain and Dobbs go on together. Dobbs shows the lengths of madness he’s decended to by ‘killing’ Curtain, taking off with all the gold and stumbling into the final and fatal meeting with Gold Hat. Howard and Curtain eventually discover what happened to the gold and leave for seperate destinies, their humanity intact.

Based on an old German folk song of 3 gold prospectors Travern tells a timeless tale of what greed is capable of doing to corrupt normal, decent men. Even Howard and Curtain participate in the nightly armed checking of their share, but they manage to bring themselves back from the brink. Not so Dobbs who goes completely over it, representing for Travern the worst excesses of capitalism, where there is never enough to satisfy a nature so self obsessed. Dobbs is no better than the bandits or the corporations who both represent rapacious heart of unfettered greed. The counterpoint is the communal life in the village where Howard finds a future, or the fruit picking eulogised by Curtain where everyone contributes to the common cause. The philosophy is never laid on with a heavy hand though, Huston doesn’t labour the point and in the end it’s a character piece anchored by the superb work of Huston senior and crowned by Bogies actorly turn. Warner was right to fear the public wasn’t ready for Bogart in this type of role, and it fared poorly in the public arena. It did much better within the industry with several Academy Awards and has become a critics standard whenever the great classic American films are discussed. Rightly so. 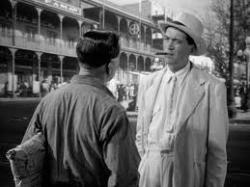 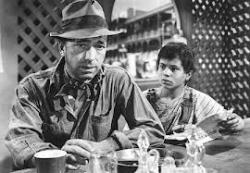 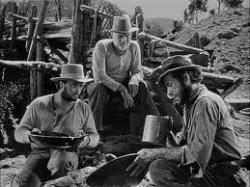 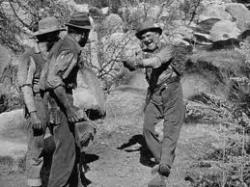 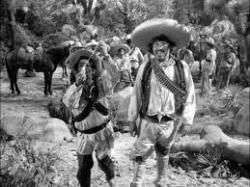