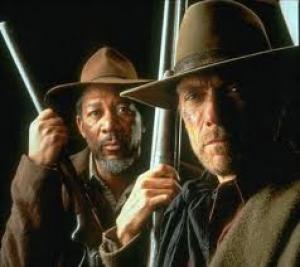 Eastwood on the Munny

Let's hope Clint Eastwood is remembered for his filmic legacy rather than his bizarre turn at the 2012 Republican Convention and his very unconvincing 'invisible Barack-on-chair' work. The right wing leaning actor-director has risen above being his generation's John Wayne by carving out a respectable body of work as a director and producer later in life, which will possibly eclipse even his golden movie star period in the '70's when he was consistently the top box office male star. In 1990, with his audience appeal not so strong and after a series of undistinguished films Eastwood pulled out a script he'd had for 10 years and recruited some heavy hitting acting talent to match it with him in a downbeat and reflective western that went further than even Eastwood's mentor Don Siegel did in his excellent 'The Shootist', appropriately enough starring John Wayne. The source material was a story and script by David Webb Peoples, who has also written Blade Runner and would go on to write 'Twelve Monkey's' for Terry Gilliam.

William Munny (Clint Eastwood) is a pig farmer with a dark past as he struggles to raise two young children after the premature death of their mother and his wife, the woman who'd saved him from his wicked ways. Will's past comes back to haunt him soon enough when a rider, the Schofield Kid, arrives with the offer of joining a mercenary endeavour to kill a couple of bad cowboys who'd "cut up a whore". In the town of Big Whiskey, where the knife attack happened, a group of whores pooled their money to raise enough to attract bounty hunters as they were unhappy with the punishment the sheriff, Little Bill (Gene Hackman), meted out for the attack. Will initially turns down the request to accompany the Kid, but eventually he ropes in an old colleague in Ned (Morgan Freeman) and they set off for Big Whiskey. Little Bill in the meantime is trying to deter any gunman from coming to town and carrying through with the task and makes an example of English Bob (Richard Harris) by beating him to a pulp and sending him on his way. When a sick Will attempts to take a drink in the bar of the saloon in town, and Ned and the Kid enjoy the delights of the ladies upstairs, Little Bill disarms Will and beats him also. Ned and the Kid take him away to recover before they set off together to kill the cowboys.

Eastwood creates a magnificent ambience and authentic tone with 'Unforgiven' that never lets up. Every frame is invested with authority and a feel for detail that brings an ease of accessibility to the bleak tale of a conflicted man still clawing at redemption for a heavily chequered past. The violence is stark, but contextual and never gratuitous, and that can't be said about all of Eastwood's work, as he regretfully admits himself a tendency to romanticise violence existed in previous films he'd been associated with. 'Unforgiven' shows a raw fisted version of frontier brutality and suggests there are consequences to accepting that course of action too lightly. The Kid is all bravado and braggadocio before confronting the reality of having to kill a man, and Will puts it into perspective for him during a sombre soliloquy, "It's a helluva thing, killin' a man" he tells him, "taking away all he he's got" and it's plain that many a dead man's face haunts Will's dreams.

Gene Hackman is the perfect counter balance for Eastwood's gravitas, giving Little Bill a world weariness but a humanity that brings together the man with a dark past, but also the potential of grafting a future. Little Bill is proudest that he's building his own house, and even if he's seen and done terrible things, he's able to reconcile them and move on, and is condemnatory of  eulogising a past that is more myth than fact. Eastwood pulls this thread together by the quasi-comic device of Little Bill appropriating English Bob's biographer who is travelling with him, and putting him right on Bob's much embroidered stories of past glories. Little Bill soon finds his vanity is playing to the biographer in the gallery, especially in his beating of Will. Ironically the shootout Bob manufactured as true in his book comes to resemble the one Eastwood shoots at the films climax, creating a double irony. The leavening of the relentless downbeat mood by some humour is also well handled, as is Little Bill's running gag on the 'Duck' of death.

The themes inherent in the text are woven throughout, a man with a tortured past trying to create a future where he assumed there was none, and the idea of civilising influences emerging in a frontier environment. Will must be civilised from within, a process he's embarked upon ever since his marriage and one he still struggles with, whereas the land must be civilised from without, even if the civilising force has to use very uncivil methods to do so. Sex as a commodity is taken for granted in this scenario, and the local brothel keeper is mostly worried about loss of income once his whore was cut, settling for ponies as settlement for the damages. When the women use money to buy the death of the guilty men via the 'services' of mercenaries there is outrage from the authorities, the double standard is just another part of the prejudice the women work with.

Eastwood hands in a very worthy performance as Munny, his very name an indictment of his actions, and his low tones and beaten brow are perfect for this fin-de-siecle cowboy. Hackman and Freeman more than hold their own and balance the film beautifully, and Richard Harris' well judged turn has some great moments. "A president? why not shoot a president?" he booms, after hearing of the attempt on Garfield and insisting the majesty of royalty would mitigate against such vulgarities. All are portraits of flawed men in a hostile landscape trying to survive the many and treacherous pitfalls to which such men are prone. Eastwood used his frequent collaborator Jack Green for the sweeping cinematography and pulled in a fine score from veteran jazz musician Lennie Niehaus.

Clint Eastwood could have been 'forgiven' for seeing this film as the fitting summation of his career and a worthy winding down point at age 62 in 1992. Incredibly since that time he's garnered more adulation and added to his reputation with a series of acclaimed,  mature and superbly realised works that could be easily used to mount a case for him being the pre-eminent American director of the last 20 years. Who knew? That he dedicated the film to his great mentors Sergio Leone and Don Siegel was a heartfelt and appropriate gesture. 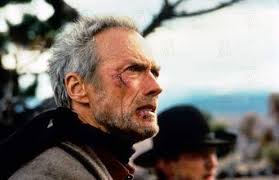