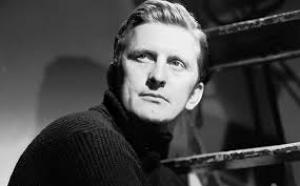 "People are composed of many things, and in my work, what influences me is the complexity of people - the chiaroscuro of dark and light. When I play a strong guy, I try to find, where is he weak? And, conversely, when I play a weak guy, where is he strong?" ~ Kirk Douglas

Kirk Douglas, an actor with such a ferocious and tenacious lust for life (one of the rare breed of humans to make it past the age of 100) lived most of that richly filled life as a fully-fledged Hollywood star. To survive so long, with all the blessings and curses that no doubt accompanies such a life, is no mean feat in itself, let alone leaving such an impressive artistic legacy from fine work across 7 decades. The tenacity was evident early, picked up in a hard scrabble childhood in a small town in New York, born there in 1916 as Issur Danielovich to poor Jewish, Russian immigrants where dreams of an acting career were unheard of for a Ragman’s son. Doulas had a stint in the Navy during the war, worked and put himself through University, before he was granted a scholarship at a New York acting academy, and was a classmate to Betty Perske, who a couple of years later (as Lauren Bacall by then) would recommend Kirk to producer Hal Wallis in 1946 for his first screen role in The Strange Love of Martha Ivers, opposite the legendary Barbara Stanwyck.

Douglas seemingly arrived close to fully formed as a screen actor, and from this first film replete with his brooding intensity and arresting gaze he never ceded the screen to anyone. In only his second film he matches the more established Robert Mitchum in Jacques Torneur’s masterful Film Noir, Out Of The Past, and in his 4th film he supports Burt Lancaster, an actor who was to become a lifelong friend. Mark Robson and Stanley Kramer made superb use of his scrappy physique in the boxing film Champion, which could have been lost in the cycle of boxing pics at the time (The Set-up, Body and Soul) if not for Kirk’s visceral performance. Douglas recognised the film as a star making vehicle, as did his peers when he was nominated for a Best Actor Oscar, and the dynamic actor never took a supporting role again, except by choice.

As the 1950’s opened, a couple of stellar Noir roles arrived back to back, confirming Kirk’s A-list status. The hottest director in Hollywood was Billy Wilder, coming off the triumph of Best Picture winner Sunset Boulevard, and now finally in total control of his own production company. He offered Kirk the seminal role of the cynical reporter Chuck Tatum in Ace In The Hole, a part Douglas relished. The film is a masterpiece and Douglas never better, but it bombed at the box-office, whereas he scored a hit with another A-list director, William Wyler and his edgy adaptation of the play, Detective Story which was a success at the box-office and with the industry, gaining many nominations although this time not for Douglas. The veteran director Raoul Walsh, whom Kirk detested, was handed the actor because of a Warner contract in what would be his first western, Along The Great Divide, a genre the actor would return to over several decades.

In an attempt to control his destiny Kirk also formed a production company, Bryna, named after his mother, and the company would proceed to produce some 25 films in the next 20 years, many starring Douglas, prime amongst them the two Stanley Kubrick directed projects Paths of Glory and Spartacus. The former was one of the greatest films on the subject of WWI, featuring one of Douglas’ finest performances as the lawyer defending 3 French Army soldiers accused of cowardice, and the latter a blockbuster before the word was coined. Spartacus was Kirk’s baby, and after he fired his first-choice director Anthony Mann, he turned to Kubrick the Boy Wonder to save the day, and he managed to turn in an intelligent epic while Douglas carved a role that he would forever be associated with.

During the same period Kirk enjoyed a fruitful collaboration with MGM house director Vincente Minnelli, featuring two superb films on the topic of tinsel town, The Bad and The Beautiful and Two Weeks in Another Town. The third project gave Douglas another bravura role, that of Vincent Van Gogh in the bio-pic Lust For Life, which won him a Golden Globe and another Academy Award nomination. He also teamed up with John Sturges for a couple of fine westerns, Gunfight At The O.K. Corral (with Burt Lancaster - the pair became lifelong friends in the process) and Last Train to Gun Hill, opposite Lust for Life co-star Anthony Quinn.

"Kirk would be the first person to tell you he's a difficult man, and I would be the second"
~ Burt Lancaster at ceremony for AADA lifetime achievement award to Kirk in 1987

As most ageing Hollywood actors did in the 1960’s, Douglas turned to a producing a plethora of war films and westerns, with mixed results. He worked with John Wayne, the biggest movie star of all, in a couple of them, namely Otto Preminger’s In Harm’s Way and Burt Kennedy’s The War Wagon. He made another fine film with Lancaster, the John Frankenheimer directed political thriller Seven Days In May, about an attempted military coup in Washington, baiting Burt with the plum role of the villain while Kirk took the lesser role. In 1962 he made what he always said was his favourite role, written by Dalton Trumbo, a modern cowboy in Lonely Are The Brave. He worked for A-List directors Anthony Mann in The Heroes of Telemark, Elia Kazan in The Arrangement and Joseph L. Mankiewicz in There Was a Crooked Man… opposite fellow veteran Henry Fonda.

Apart from a few interesting pieces over the last part of his career, including a sweet valentine to the past with Burt Lancaster (Tough Guys) in 1986, Douglas settled in to becoming a writer, publishing both fiction and memoirs. Even a stroke couldn’t slow him down, after recovering he made Diamonds in 1999 with old friend Lauren Bacall, 49 years after they made Young Man with a Horn together in 1950.

Kirk Douglas has sucked every last drop out of life, appearing in public at the grand old age of 101 at the 2018 Golden Globes, an award he was first nominated for 66 years prior! His commitment and intensity to the art of screen acting, his ability to tap depths of emotion and intellect illuminated and informed his creation of a gallery of the most memorable characters to grace the silver screen. He was a major philanthropist across the years, and a committed liberal who helped break the Blacklist,  a decent guy with a big heart and a smile to match. Fairly safe to say we shall not see his like again.