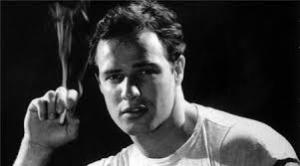 Method in his madness

“To grasp the full significance of life is the actor's duty, to interpret it is his problem, and to express it his dedication.”  ~ Marlon Brando

Brando, the mythic name that more than anyone else signals the arrival of the modern film actor. It's impossible to overstate his influence on the generations of actors who have trod the boards and fretted and strutted their hour in front of the arc lights of the movie set since, as his approach and general insouciance forever changed the possibilities of what the actor could accomplish.

Marlon was born in Nebraska to an alcoholic mother and a cold and distant father. His mother worked in theatre with Henry Fonda amongst others, and Brando duly set off for New York and a life in the theatre. After a series of roles in summer stock and some study at The Actor’s Studio he landed the plum part of Stanley Kowalski in Elia Kazan’s Broadway opening of Tennessee Williams’ A Streetcar Named Desire  and burst upon the scene like an a hand held flare.

Fred Zinnemann snagged Brando for his first film role, The Men,  a drama about injured returned servicemen written by future HUAC blacklist victim Carl Foreman. He then capitalised on his reputation by putting Stanley on the screen for his friend and mentor Kazan, following it up with Viva Zapata!  (written by John Steinbeck) and crowning his collaborations with Kazan by producing one of the great performances in all of cinema with Terry Malloy in On The Waterfront.  Brando won the Academy Award for the role, a pinnacle from which the only way was down. Even though they made Waterfront  together, an allegory for HUAC, the pair fell out over Kazan’s decision to ‘name names’ to HUAC, and Brando remained at the forefront of supporting liberals in politics, protesting the McCarthy era and its shameful blacklists.

“The only reason I'm in Hollywood is that I don't have the moral courage to refuse the money.” ~  Marlon Brando

Like Orson Welles before him, Brando was an individualistic artist who bumped into the cookie-cutter machinery of Hollywood, and as soon as he stopped making money for the studios they turned their backs. After a couple of artistically respectable studio efforts in the late 50’s, Brando endured the big budget fiasco of the remake of Mutiny on The Bounty,  taking most of the blame for the box office failure and massive cost over run, some of it deserved due to his demanding behaviour. Brando directed part of Bounty,  following up on his only complete directing effort, the superb One-Eyed Jacks,  a brilliant re-imagining of the western, a troubled project he took over from Stanley Kubrick and Sam Peckinpah.

In the sixties Brando concentrated on his political activism and supporting the Civil Rights movement and only made idiosyncratic films rather than big studio projects. Many of those films are better than they were held to be at the time as audiences were not ready for Brando to work in what would now be the equivalent of ‘indie’ films. Brando’s reputation had suffered so much that when a large studio project cane along that piqued his interest, as in Paramount’s The Godfather,  Francis Ford Coppola had to film an audition to convince the studio that an unrecognisable Brando could play Don Corleone.

The Godfather  resurrected Brando’s career and reputation, as did the remarkable film he made for Bernado Bertolucci, the extraordinary Last Tango in Paris,  released the same year. Despite the cache he enjoyed he wrong-footed everybody by declining the Best Actor Academy Award he received for The Godfather,  sending an Indian woman in his place to protest the treatment of America’s indigenous population. Brando then spent the next decades confounding any expectation that he’d returned to the Hollywood A-list, taking small roles in Blockbuster films to fund his increasingly bizarre lifestyle. He made the occasional fine film (The Missouri Breaks, Don Juan DeMarco)  with many peculiar choices mixed amongst them, but finished with a wonderful effort in The Score, acting in the company of two worthy inheritors of his legacy in Robert De Niro and Ed Norton.

"An actor is at most a poet and at least an entertainer."
~ Marlon Brando

Marlon Brando was a classic misfit in many ways, an anti-authoritarian caught in the star making machinery of the Dream Factory and resenting every second of it. He even came to despise his own profession; in much the same way as Laurence Olivier, he thought it no job for a grown man. He constructed many rationalisations to excuse himself for not learning his lines and never doing the same thing twice, but truthfully, this feigned anarchy was at the heart of his art and indicative of the accommodations he needed to make in order to function in the business. His life was extraordinary and it descended into the level of a bad soap opera in the latter years, but his achievements were singular and incontrovertible. To fully appreciate Brando and his very idiosyncratic take on his own life it’s essential to read his superb autobiography from 1995, Songs My Mother Taught Me.  Like that other iconoclast Bob Dylan and his superb and wide ranging Chronicles Vol 1,  Brando’s book forces us to re-think much of what we thought we knew. Suffice to say, there will never be his like again.

The Countess From Hong Kong