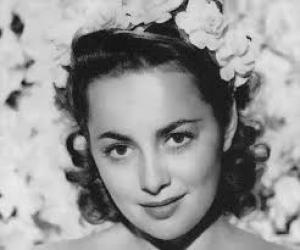 'Playing good girls in the 30s was difficult, when the fad was to play bad girls. Actually I think playing bad girls is a bore; I have always had more luck with good girl roles because they require more from an actress.' ~ Olivia De Havilland

Olivia De Havilland led a remarkable and remarkably long life which came to an end at the ripe old age of 104. She was born in Tokyo to displaced British parents in 1916, her mother an actress and her father a professor. Only 3 years later they took Olivia and her younger sister Joan on a journey back to England. They were delayed in San Francisco due to ill health and the family decided to settle there for the climate before the philandering husband returned to Japan and the family housekeeper! Olivia was attracted to the theatre as a teenager and was cast in Max Reinhardt’s production of A Midsummer Night’s Dream, who promptly did a deal with Warner Brothers to make a film version. Warners liked what they saw with the young actress and signed her to a standard seven-year contract in 1934.

The young actress became a favourite of Hungarian director Michael Curtiz as his star was in the ascendent at the studio and Curtiz gave her a big break opposite Errol Flynn in Captain Blood in 1935. The chemistry between the 19-year-old actress and the dashing Tasmanian was evident from the start and the surprise hit led to several collaborations between the difficult director, the priapic actor and the butter wouldn’t melt in her mouth actress. A good Mervyn le Roy effort, Anthony Adverse, with Frederic March followed, but a couple of non-descript screwball comedies proved uninspiring before Curtiz again delivered for the young woman, in a solid role in The Charge of The Light Brigade, and in a star making role as Maid Marian against Flynn’s Robin Hood in The Adventures of Robin Hood, a highlight of Hollywood’s Golden Age. Meanwhile, her younger sister signed a contract with RKO in 1937 and worked her way quietly up the ladder.

De Havilland was unable to capitilise on her newfound stardom at Warners, where she was increasingly unhappy, and her third billing to Flynn and Bette Davis in the Curtiz helmed period drama The Private Lives of Elizabeth and Essex was emblematic of the issue. She had a lifelong friendship with Davis, another independent actress who made trouble for the studio to brass. De Havilland starred in a couple of lame romantic comedies before she ferociously chased the plum role of Melanie in David O. Selznick’s landmark Hollywood production of Gone With The Wind. She proved the perfect sympathetic foil as the quiet and gracious southern woman to Vivien Leigh’s inspired brat, Scarlett O’Hara and confirmed emphatically that she belonged in the first rank of movie stars and won her an Academy Award nomination for Best Supporting Actress. Much to her chagrin, Warners failed to give her the kinds of roles that her new status deserved, and she engaged in a round of refusals and studio suspensions, a battle that would have significant industry repercussions when a court ruled in her favour in 1943.

In the early 1940’s she continued her association with Flynn and Curtiz in the excellent western They Died With Their Boots On, which was for the actors their 8th and last feature together. Olivia’s sister Joan, working under the stage name Fontaine, burst to prominence on the movie scene in spectacular fashion, nominated for an Academy Award in Alfred Hitchcock’s first American film, the masterful, Rebecca. Fontaine bettered her record the following year, winning Best Actress for Hitchcock’s Suspicion, opposite Cary Grant. Far from being a family triumph the sisters continued the frosty sibling relationship that had been a part of their lives since childhood.

Olivia chased meatier roles, notably for Mitchell Leisen in Hold Back the Dawn and for John Huston, with whom she had a long affair, in In This Our Life, opposite her good friend Bette Davis. She did well in a smart romantic comedy against Robert Cummings in Princess O’Rourke, but her court case against Warner Brothers led to her leaving and signing a two-picture deal with Paramount, and the first of these, Mitchell Leisen’s To Each His Own, finally won her an Academy Award for Best Actress. Olivia and Joan Fontaine are still the only sisters to have won in a major category. Ironically her next film, for Universal, was a fine Film Noir by Robert Siodmak, The Dark Mirror, where she played twin sisters! She continued her fine run of dramatic roles with, The Snake Pit, directed by Anatole Litvak for Fox, a ground-breaking film confronting mental illness that won her a New York Film Critics award before another Academy Award winner arrived with William Wyler’s masterpiece, The Heiress, opposite Montgomery Clift.

Family life and theatre work marked the early 1950’s for the feted actress, but instead of basking in the prestige work that might have come to a two-time Academy award actress, she never again worked on such A-level projects. She went to Europe and married a Frenchman and lived in Paris for the rest of her long life. Journeyman director Henry Koster made a solid adaptation of Daphne du Maurier’s My Cousin Rachel, where she played the title character against Richard Burton, in his first American film. 1955 saw two films, a mild romantic drama for Terence Young, called That Lady and a better Stanley Kramer medical drama, Not As a Stranger, alongside an A-list cast featuring Frank Sinatra, Robert Mitchum and Gloria Graeme. She reunited with Michael Curtiz in 1958 for an Alan Ladd western and starred opposite the fine Dirk Bogarde in Anthony Asquith’s excellent British courtroom drama, Libel.

The 1960’s brought a typical European co-production her way, Light In The Piazza, a fine drama directed by Guy Green and after Joan Crawford dropped out of the follow up to the surprise hit, Whatever Happened to Baby Jane?  She stepped in as a favour to her friend Bette Davis in Robert Aldrich’s Hush Hush Sweet Charlotte. A handful of films that were frankly beneath her, and more an indication that Hollywood has never known what to do with ageing actresses, and she finished her feature film career effectively in 1979. She worked in television on and off for many years later but would always be known as the gracious Melanie from the immortal classic, or one of the two warring, Academy award winning sisters whose ongoing poisonous rivalry would flare up and provide tabloid fodder.

Olivia De Havilland was a fine actress whose languid charms and deceptively steely underbelly, graced many a fine film during the Golden Age of Hollywood. She stood up for herself against the monolithic studio system and her success provided legal protection for generations of actors that came after her. De Havilland’s quiet sophistication, ethereal beauty and effortless craft saw her carve a career that established her in the first rank of stars, in a handful of roles that will be revered for centuries. She lived a singular, if very long life, and truly was one of a kind.