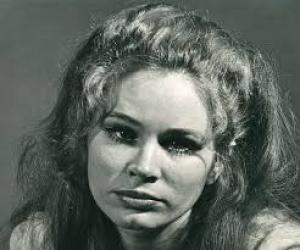 Born Karen Zeigler in 1939 in Chicago to an artistic family, as Karen Black she became one of the defining female figures of the New Hollywood of the late 1960’s and 1970’s. She learned her craft as a young woman on theatre stages in New York, winning praise and a Best Actress nomination from the New York Drama Critic’s Circle for her Broadway debut, The Playroom. Francis Coppola soon cast her in his 1966 feature, You’re a Big Boy Now and the opportunity and good notices prompted her to relocate to Los Angeles.

Black spent the next couple of years in the grind of supporting roles on TV shows in Hollywood, before Dennis Hopper offered her a key role in the groundbreaking counterculture phenomenon, Easy Rider. She followed that film with one of her best roles in Bob Rafelson’s masterpiece, Five Easy Pieces opposite Jack Nicholson, winning a Golden Globe for Best Supporting Actress. Nicholson cast her next in Drive, He Said, his only directorial effort and her career was then catapulted into big budget projects with uneven results.

She was more at home in independent features than mainstream gloss, even though she starred in Airport 1975 and Hitchcock’s final film, Family Plot, opposite Bruce Dern. Highlights from that period include the gritty Cisco Pike, with Kris Kristofferson, and Day of The Locust for John Schlesinger. She made a memorable impact for Robert Altman in his superb Nashville, playing a country singer – a role for which she wrote and sang her own songs. She filmed Capricorn One for Peter Hyams, opposite Elliot Gould and went back to the stage for Robert Altman in Come Back To The Five and Dime, Jimmy Dean, Jimmy Dean, in an all-star female ensemble that Altman subsequently committed to celluloid with the original cast.

Karen Black spent the last forty years of her life and career making an astonishing amount of films, some 125 features, mostly low key and low budget independent films that did not enter the public consciousness in the way her key period films did. A note of her respect in the industry was her cameo in Altman’s The Player in 1992 where she played herself, a talented and accomplished actress who carved out a memorable niche during one of Hollywood’s most vibrant eras.

A late stab as a  playwright gave us an insight into her process and she weighed the merits of each discipline, reflecting, "Everything that occurs in this zone is imagination-based. In that sense you mockup a life, and then you become the effect of what you’ve mocked up, so it’s cause and effect. So, the more you can mock it up so that it seems real to you, the more you can react to the effect. That’s what acting is, and that’s what writing involves for me, too. That’s the simplicity of it. It sounds simple, because it is."