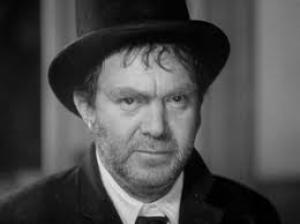 "A lot of people say I've deserted my art because I left Broadway and the stage. Hell, I'm no artist. I'm a working man. I've got a trade just like any other mechanic, and I follow my trade where the work is. Just now it's in Hollywood, but I'm not tied to Hollywood." ~ Thomas Mitchell

Thomas Mitchell was a marvellous character actor during Hollywood’s Golden Age, always worth watching even if the glint in his eye meant he was capable of stealing every scene he was in. Born in 1892, Mitchell came to Hollywood in the early 1920’s as a Broadway and Shakespearian trained actor. It wasn’t until Frank Capra took the round-faced character actor under his wing with 1937’s Lost Horizon that Mitchell came to prominence. In the same year, Leo McCarey gave him a solid role in the superb drama, Make Way For Tomorrow and John Ford did the same if his adventure pic The Hurricane. 2 years later in 1939 during the annus mirabilis of Hollywood, Mitchell had his own miracle year, working in John Ford’s Stagecoach, Howard Hawks’ Only Angels Have Wings, Frank Capra’s Mr Smith Goes To Washington and the daddy of them all, Victor Fleming’s Gone With The Wind. Stagecoach brought him a Best Supporting Actor Oscar, and John Ford would again provide him an excellent role in the under-rated The Long Voyage Home, again with John Wayne.

Mitchell worked consistently through the 1940’s and early 1950’s for many fine directors like Fritz Lang, Julien Duvivier (in his Hollywood films, Tales of Manhattan and Flesh and Fantasy)and Willian Wellman, all keen to make use of his reliable screen presence. Lang walked from an interesting  film called Moontide, and Archie Mayo completed it, starring Jean Gabin and Ida Lupino and Wellman used him in his western Buffalo Bill. Ben Hecht, the famous writer, directed Mitchell in his pre-noir Angels Over Broadway, which gave Rita Hayworth her first starring role. Mitchell scored a hit in Fox's big budget Tyrone power swashbuckler  The Black Swan and it was Hawks who again provided a strange highlight in the flawed western The Outlaw, finished and compromised by producer Howard Hughes. His versatility during this phase incorporated a Film Noir for Andre De Toth, an adventure film for Victor Fleming starring Clark Gable and a war film for Lloyd Bacon.

Joseph Mankiewicz’s Keys To The Kingdom and Robert Siodmak’s The Dark Mirror, opposite Olivia De Havilland were notable efforts before Mitchell took a signature role as forgetful Uncle Billy in Frank Capra’s eternal fairy tale, It’s A Wonderful Life. Raoul Walsh gave him a key support in his Errol Flynn vehicle Silver River, a western, and John Farrow cast him in an odd retelling of the Faust myth, Alias Nick Beal, starring Ray Milland. The final A-Grade film Mitchell made a mark in was Fred Zinneman’s High Noon in 1952 and he rounded out this period with a nice role for Fritz Lang in the Film Noir, While The City Sleeps and had fun in an Audie Murphy remake of Destry Rides Again for Universal, called simply, Destry. He spent his final years bouncing between average films and, like many of his contemporaries, appearing in numerous TV shows and died at the relatively young age of 70 after a life well lived.

Thomas Mitchell was the quintessential character actor during a particularly golden period, professional to a fault and always compelling when he was on screen. His well honed, theatre based craft was effectively employed by many A-list directors who recognised the value of an acting master when they saw one. Other people were equally convinced of his ability as he became the first actor to win an Academy Award, and Emmy and a Tony.