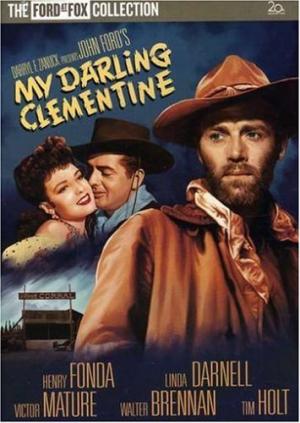 "I love making pictures but I don't like talking about them." ~ John Ford

One of John Ford’s most lyrical and iconic westerns and one of Henry Fonda’s finest roles makes this a must see slice of Americana. Curiously for a guy who ended up re-inventing a whole genre this is Ford’s first western after Stagecoach (1939). For the next 20 years of his productivity westerns would make up roughly half of his output and cement his name as the pre-eminent director in the field. Again, for someone who was deeply involved in sourcing material post-war it was not Ford who initiated this project, but a job of work for Darryl F Zanuck at Fox. Ford was fresh out of the Navy and WW2 and had completed his comeback film, the fine and understated They Were Expendable as a tribute to the men he served with. Ford was attracted to the biographical source material Frontier Marshall, having met the real Wyatt Earp, who died in 1929, during the silent film era, but that didn’t stop him from straying from the truth in order to service the myth when it suited him, a theme
he would pursue in his subsequent westerns.

Ford insisted on shooting at his favourite location, building his own movie town of Tombstone in Monument Valley, Utah. The counterpoint the towering monoliths offered to the insect-like humans, trying to make a mark on the awe inspiring landscape was irresistible. We meet the four brothers Earp droving cattle through the valley, being watched by two figures on a horse drawn buggy. Wyatt (Fonda) rides up to them and engages Old Man Clanton (Walter Brennan) in conversation. Clanton gives him directions to Tombstone and makes an offer on the cattle which Wyatt rejects. The Earp’s make camp for the evening, leaving the herd in the care of younger brother James, while Wyatt and the other two Virgil and Morgan (Tim Holt and Ward Bond) go to town for some R&R. They find the town to be ‘wide open’, as in rough, violent and with no effective lawman. After helping to fix an incident involving a drunk, Wyatt is offered the position of Marshall but declines. Upon returning to the camp they find their brother James murdered and the cattle rustled. Wyatt returns to town, takes the job and deputises his brothers.

Wyatt soon learns the ways of the town involve gambling and drinking, and he’s keen on the former. He also learns a key figure in the town is Doc Holliday (Victor Mature) who has previously operated as a law unto himself. Wyatt’s easy disposition disarms the belligerent Doc and a solid friendship is established.  Doc’s old girlfriend Clementine (Cathy Downs) arrives in town, to find he’s involved with the local prostitute Chihuahua (Linda Darnell). Wyatt takes a shine to the prim and proper Clementine. Doc, it becomes apparent is consumptive and alcoholic, and is keen on drinking himself to death. The town’s relative peace is shattered when Chihuahua reveals Billy Clanton (John Ireland) killed James and the tension between the murderous Clanton’s and the law enforcing Earp’s reaches its climax at the OK Corral.

From this pulpy scenario Ford fashions a commentary on family and values. The Clanton’s represent unfettered greed as they take what they please with whatever means necessary. Fonda may have been recalling Brennan’s nasty rendering of the old man when playing against type for Leone many years later, as the performance has some chilling moments, his shooting of Virgil still has the power to shock. The Earp’s represent a civilising influence, not averse to fighting violence with violence if the occasion demands. Clementine is the ideal, an upright schoolmarm, representing the hope of future children, who the wilderness must be tamed for to ensure the human foothold in the unforgiving frontier. Fonda plays Wyatt as the archetypal, idealised everyman, with a quiet dignity and resolve. He knows he has more than the law on his side he has a wider morality to back him up. Wyatt is carving out a new West and Doc’s indulgent hedonism has no place in it, he is the black sheep of Wyatt’s extended family. Victor Mature gives a first-rate performance as the conflicted medic who stands up for the right thing in time honoured 'man's gotta do' tradition.

Ford employed all his trademark elegance and taste in creating a kind of emotional poetry in which to couch the tale. His sentimentality is not the cloying kind, it’s the accretion of tiny moments and resonances that imbue the whole with an elevated reality. Obviously this is not the real West, it’s a dreamscape of how we’d like it to be. Ford was a lousy family man himself according to all his biographers, so it says something that he poured so much into the issues of ‘family’ onscreen. He seems to have decided that there he could champion those values vicariously and not hear the devil voice in his head saying ‘weak sissy’? The Doc character can in some ways be seen as a cypher for Ford himself, eventually being martyred for the cause of making the town safe for ‘respectable’ people, amongst who’s number he does not belong. Maybe the old Irish catholic bastard was paying penance for his sins by building movie churches for movie families. But doing it brilliantly. 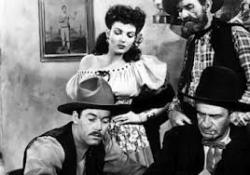 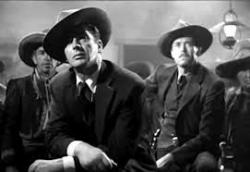 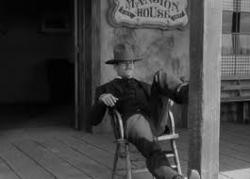 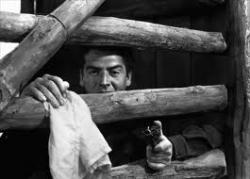 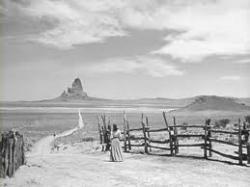