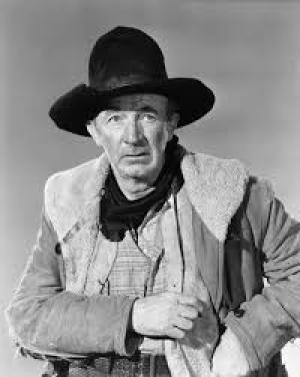 "Go ahead and learn how to act, but just don't get caught at it"
~ Walter Brennan (his advise to younger actors)

Walter Brennan became a stalwart supporting actor during Hollywood’s Golden Age, and a by-word for crusty characters in gritty westerns, Brennan embodied the grunt and grind of the working actor. Born in 1894 and after a number of remarkable careers and a stint in WWI France, Brennan came to acting as a down-and-out extra ready to do anything. He worked his way through the ranks at Universal on cheap westerns during the silent era, and even worked as a stuntman before his distinctive visage and voice found an influential friend in director Howard Hawks. Hawks gave him a support role that led to his first Oscar in Come and Get It in 1936, after the actor had appeared in over 120 feature films. Come and Get It was taken off Hawks and given to another Universal alumnus in William Wyler to complete, and both directors featured prominently in Brennan’s future career. Brennan repeated the win as Best Supporting Actor in 1938 for Kentucky and barely 2 years later Brennan won a third award for one of his best roles, In The Westerner for William Wyler, opposite Gary Cooper.

Brennan’s work rate barely faltered in the next decade as he plied his talents in films for top directors such as Jean Renoir, Fritz Lang, John Ford and Frank Capra. Ford provided a brilliant role for Brennan, cast against type as a tyrannical rancher in My Darling Clementine, but it was Hawks who provided another gem for Brennan in his version of To Have and Have Not, and also the late career highlights of Red River and Rio Bravo. Brennan was the go-to character actor of choice for several outstanding westerns over his final decades as a film actor, with Blood on The Moon for Robert Wise, opposite Robert Mitchum, and The Far Country for Anthony Mann opposite James Stewart being stand out’s. The modern western, Bad Day At Black Rock  for John Sturges also proved a nice showcase for an actor who seemed authentic in every role he took on. Incredibly he worked as much in TV in the 1950’s and 1960’s as he did in features where his craggy features and distinctive old-timey rasp became beloved by generations of viewers. Fittingly he appeared in the wonderful, light-hearted western comedy Support Your Local Sheriff a few years before he died where he sent up his own image. he often joked when Howard Hawks called him to work he only asked one question of the director - "Teeth in, or teeth out"?